I have a retraction I would like to make. Many years ago I stated, in public, that I thought The Wire was the best TV drama of all time and would never be beat by any TV Drama. It was just perfect.

I maintain that it still top two, but I really think Breaking Bad might be better. I first starting watching Breaking Bad last year when I was cooped up on the couch recovering from knee surgery. While it starts slower than The Wire, it rapidly accelerates and by season two I was completely sucked in.

I’m so sucked in, in fact, that while I watched all the older seasons on Netflix, I had to buy the most recent two seasons because I couldn’t wait to watch them and we don’t have cable.

There are only two episodes left in the series and I have to mentally prepare before I watch an episode now. It’s some crazy TV.

In short, if you are in the market for a new TV drama, and you don’t mind a fair amount of drugs and violence, this show is off the charts.

Finally back in my own kitchen so we can do a poll this week! 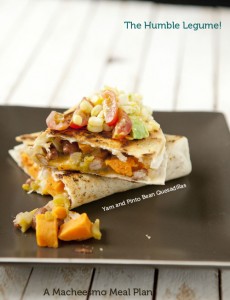 This week’s meal plan features the humble legume! As always, the meals in the plan are quick, but filling and sturdy. You can sign up now for Macheesmo Meals and get a free week to try out the plans and see if you like them!

Vegetarian Caesar Salad – Traditional caesar salad must have anchovies in it. I actually use a lot of anchovies when I make my version. To be honest, I never really even considered a veggie version, but it’s probably a good idea to have on hand. (@ Perfect Pantry)

Fresh Corn Pudding – It’s almost past corn season, but if you can still get some good sweet corn then this dish looks perfect for a early fall dish. (@ Food Loves Writing)

Blueberry Pierogi – I’ve never tried to make pierogi and have only eaten them a few times. I usually see savory versions but these look really nice as a sweet alternative. (@ Ruhlman)

Simply Recipes Photography – I always like to see how some of my favorite food blogs take their photos. I particularly like Elise’s photos because they aren’t over-stylized and really focus on the food. Here’s some tips from her. (@ Simply Recipes)

Throughout the week I love chatting with people and sharing fun and interesting stuff around the web.

And, of course, you can always subscribe to daily Macheesmo recipes via the feed or via email!

7 Responses to “The Internet Kitchen: Breaking Bad” Leave a comment