I was really excited about last week’s poll because The Homemade Trials series is quickly becoming some of my favorite posts to do here on Macheesmo. Judging from the closeness of the vote last week, I may just have to eventually do all the options in it, but the winner, Spaghetti Sauce, is an excellent start.

What are The Homemade Trials? Just as a reminder to those that haven’t read one of these posts before, I take a common thing that people normally buy at the store and compare it to the homemade version. I try to be as objective as possible and split the “trials” into four categories: Time, Cost, Nutrition, and Taste.

It’s not always the case that there’s a clear winner at the end of the day, but hopefully it can help you make informed decisions whether or not to try to make this thing at home!

We have a lot to get through regarding spaghetti sauce, so let’s get to it!

This might be a shock to you, but there’s a ridiculous amount of options when it comes to store bought pasta sauce. There’s approximately half an aisle of options at the store. It didn’t really seem fair to just pick one and compare it to a homemade verison, so I picked three:

I tried to pick three that were a wide range of prices.

To keep things simple, I also just picked the traditional version of each sauce meaning that it’s basically just tomatoes, onion, garlic, a bit of sugar (or in some cases corn syrup), and basil.

I seriously just made my standard homemade spaghetti sauce for this post. It’s the sauce I make at least once a week.

It’s about as simple as pasta sauce gets.

Besides these ingredients, I add some olive oil, about a Tablespoon of sugar and a pinch of salt which, for the purposes of this post, I actually measured for the first time ever at exactly one teaspoon.

So let’s get into the trials and see how this played out!

Here’s the thing to remember about pasta sauce prep time. Regardless of the sauce you use, you have to cook the pasta. Bringing a good amount of water to a boil and cooking spaghetti takes about 20 minutes. You might think you can do it faster, and maybe you can trim a minute or two off of that time, but that’s a good estimate I think for most people.

Obviously it takes less than 20 minutes to pour some sauce out of a jar and heat it up. Heck, you can heat it in the microwave in one minute.

Here’s the thing though. My homemade version takes less than 20 minutes to cook also. I dice the onion and garlic, cook it in a few tablespoons of olive oil, then add the tomatoes and cook them down for 10-15 minutes on medium heat. At the end, I toss in the basil. DONE.

I do this at least once a week and can vouch that the sauce is done at almost the exact same time as the pasta.

So guess what. I’m calling this category a TIE, just because you have to spend time cooking the pasta no matter what. As long as the cook time doesn’t extend past that point, it’s free!

Now, you maybe could argue that the homemade version is a tiny bit more work, but seriously. If you aren’t willing to dice 1/2 an onion, 2 cloves of garlic, and pour stuff into a pan, you maybe shouldn’t be reading this blog…

As always, I was dead convinced that the homemade version would lose this category. It turns out to only be half true. For starters, it should be noted that I used organic canned tomatoes. Even though I got them on sale, they were about $1 more than the cheapest canned tomatoes.

So if you’re really focused on cost, you could beat me.

Here’s the final breakdown though which is closer than I thought it would be. 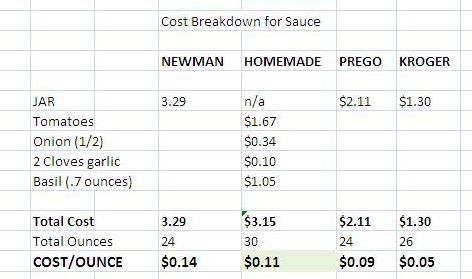 So I beat Newman’s and just barely lost to Prego. I got killed by Kroger, but so did everybody.

This, of course, makes it incredibly hard to judge because it depends on what version you’re judging it against.

I’m going to go out on a limb and Call it a TIE. I think that’s fair given that if I were solely focused on costs, I could’ve brought mine down even more by not using organic tomatoes.

This might not surprise you but really all of the sauces were very close when it came to nutrition. 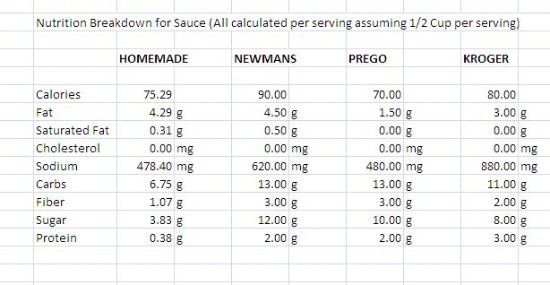 I seriously GEEKED out on this for awhile.

Everything is almost identical except three categories:

Sodium. Besides Prego, all the store bought versions are basically salt sauces. I mean, 1/2 Cup of Kroger sauce is about 40% of your recommended daily Sodium intake. That’s pretty serious. Luckily, it’s not to hard to beat at home and still season your food reasonably.

Carbs. I can’t figure out how these three sauces have about double the carbs my version has. It doesn’t exactly make sense to me, but I’m not sure the exact ratios of ingredients they used and I double-triple checked my math. Not that I really care. I’m actually happy mine has less carbs considering you eat this sauce on a BIG SERVING OF CARBS.

Sugar. Besides salt, these sauces all have way more sugar than I think you need in a sauce. I used a Tablespoon for my version and it was just enough to counteract the acid in the tomatoes.

It’s pretty close, but mainly because of the Sodium, I’m going to say that the homemade version wins this category!

I had a serious problem when it came to taste: I knew what all the sauces were and could, in no way, be objective about it.

SO, I put the sauces in 4 similar bowls, heated them up to the same temperature, and had Betsy do a completely blind taste test of the 4 sauces!

Here were her results! 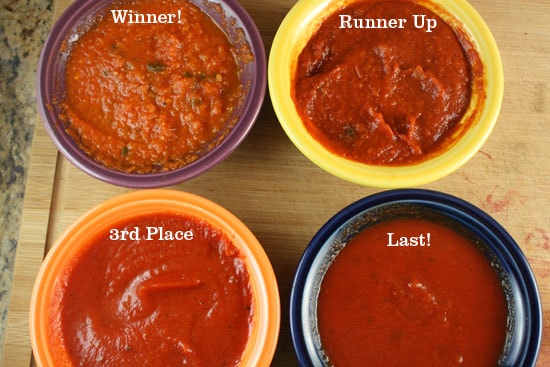 She knew that one of the top two was my homemade sauce because she eats it every week and the bottom two were too watery. But oh well. It was as objective as I could get on a random Monday night.

Her favorites in order from favorite to least favorite were: Homemade, Newmans, Kroger, Prego.

It wasn’t even close to her. She said the homemade version tasted like “Tomatoes and herbs.”

So I’m giving Taste to HOMEMADE. Woohoo! I was actually nervous about that!

While all of the categories except taste were very close, I think that the homemade version wins this trial!

As an aside, if you are going to buy your pasta sauce from the store, Newman’s tasted the best to both of us, but was the most expensive by far. The best bang for your buck was actually KROGER version, which we both preferred over the Prego version even though it’s about half the price.

Of course, the Kroger version also has the most sodium by far, so it’s not too surprising that we thought it tasted better. Salt, after all, makes things good.

At the end of the day though, you should try making it at home!

Leave a comment. Let me know how my analysis is flawed. Oh. And please give me more ideas for future trials!

23 Responses to “The Homemade Trials: Spaghetti Sauce” Leave a comment