I put out a Twitter request last week for suggestions for the next Homemade Trials and got the most responses for salsa!

That seemed to make sense considering that it’s Cinco de Mayo this weekend.

If you aren’t familiar with The Homemade Trials series, basically I make a homemade version of a food and compare it to store-bought versions in the categories of TIME, COST, NUTRITION, and TASTE.  Sometimes there is a clearcut winner (sometimes it isn’t me).

Let’s see what happened with salsa!

There are a million different salsas at the store, but honestly a lot of them are very similar.  I tried to pick three that varied pretty wildly on cost.  To keep the taste test consistent, I picked the HOT variety of all of the salsas and also tried to make my version pretty spicy.

For the store-bought versions, I went with KROGER, the generic store brand, PACE, a popular nationwide product, and 505 BRAND which is a regional brand that I normally buy and like.

I put these three varieties against my homemade version.

It was destined to be an epic battle!

I have a very simple salsa recipe that I use regularly when I make homemade salsa.  I like to use canned tomatoes over fresh most of the time just because that means I can make it consistently year around.  In this case I used an organic fire roasted tomato which I really like, but it did increase my cost substantially as you’ll see.

My most basic, but still delicious salsa recipe!

1) Mix ingredients and enjoy! It’s better if it sits for a few hours before serving, but not necessary.

Honestly, this salsa recipe is about as easy as it gets.  Just dice up the few veggies and stir them in with the diced canned tomatoes and diced canned green chiles.  I like to pulse everything very quickly in a food processor just to get teh texture right.

Squeeze in the juice from one lime and season with salt.

It gets better if you let it chill for an hour or two, but it’s fantastic right away if you can’t wait.

Well, this probably isn’t shocking to you, but it’s much faster to pop open a jar of salsa than to chop and stir your own version.  Honestly though I can whip up a batch of homemade in under ten minutes so it’s not like the store-bought versions are blowing me out of the water.

Nevertheless, I have to give TIME to the store-bought versions.

I was a bit ashamed of the breakdown of my cost for the homemade version!  I thought it was going to do better but it only beat one of the store-bought brands.

Both the Pace and Kroger brands beat the homemade version.  In my defense, Pace was on sale at the time and if I would’ve used non-organic tomatoes, I could’ve brought my cost down to $.15 cents per ounce.

No matter what though, the answer to COST is “It depends.”  The Kroger brand is the cheap way for sure and 505 is always going to be most expensive.

This was the easiest nutrition calculations I’ve ever done for a homemade trial.  Salsa doesn’t have much going on in the nutrition department.  This is good actually.  Salsa is pretty healthy except for the fact that most people eat it with fried corn chips… not exactly the healthiest thing in the world.

Anyway, as you can see most of the categories for the salsa are pretty equivalent and generally they are all tied.

THAT SAID, my homemade version has drastically less salt than any of the other versions.  I wasn’t too surprised that mine was less, but I was surprised by how much less mine clocked in.  Especially cheaper salsas depend on salt to provide a lot of their flavor which is funny because most people eat them with really salty chips.

I’m giving NUTRITION to my homemade version just based on the salt victory.  People eat too much salt and this would be an easy way to knock down your salt intake. 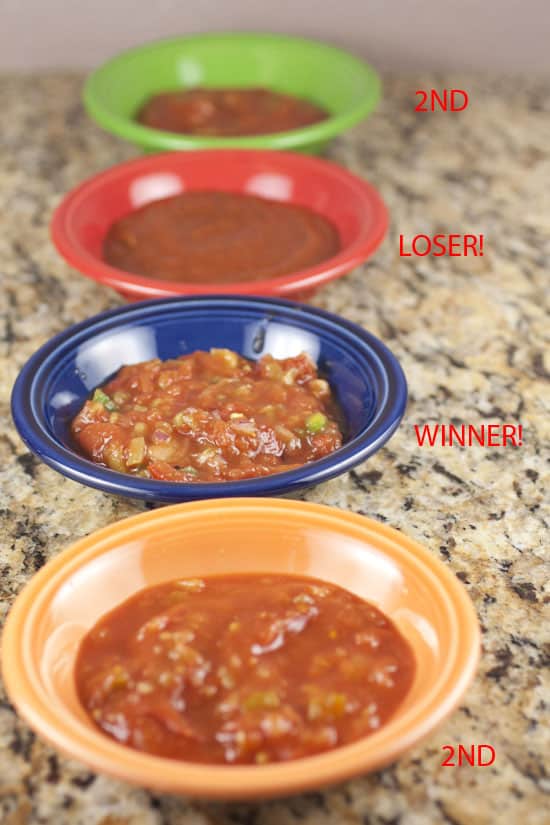 There’s no way that I could taste these fairly so I brought in my seasoned official Macheesmo taste-tester (wife) to do the judging.

She is also a Tex-Mex and salsa expert so if there were ever a contest she could judge, this is it.

Unfortunately, she could spot my homemade version by sight, but I don’t think it really changed her judgement.  The homemade version was clearly the best on taste.  It tasted really fresh with just enough heat and acid to make a really good salsa.

The PACE and 505 varieties were very similar and she gave them a TIE.  When I tasted them side-by-side, I had to agree that they were basically the same even though I normally buy 505 brand.

The Kroger brand was, frankly, horrible.  It was watery and had no texture at all.

In any event, TASTE goes to HOMEMADE.  I’m always happy to win that category!

At the end of the day, this was a very close homemade trial.  I was glad to see this because, quite honestly, I rarely make homemade salsa.  This might change for me after this test though.  The homemade version was just shockingly better in the taste department. I’ve never actually tasted them side-by-side like this.

One distinction that is important, but didn’t come through in the nutrition breakdown, is that even though the 505 brand and Pace tasted very similar, their ingredient lists are VERY different.  The 505 brand uses just vegetables.  It has no preservatives or flavorings.  I like this about it and is why I buy it.  If you don’t care about that though, just buy Pace.  It tasted very similar and is cheaper.

I think after analyzing all the categories, I have to give this homemade trials to the HOMEMADE version.  It was a close battle but the taste category was a landslide victory and the slight edge in the nutrition department puts me over the edge I think.

This was a close one though and I still think I will be buying salsa pretty regularly.  If I have the time though and want some really good salsa, you can bet I’ll be whipping up a batch of my homemade version.

What do you think?  Did I call this one right?

26 Responses to “The Homemade Trials: Salsa!” Leave a comment