If you have been reading Macheesmo for longer than a few weeks you’ve maybe ran across one of my mix rants. But to review, I really don’t like mixes for things like pancakes and muffins. They just don’t make sense to me.

But, to be honest, I had never actually calculated the real value of the mix. Are they cheaper? Are they better for you? How does a mix taste compared to a made-from-scratch version?  Of course, all of these questions can be answered by running a few muffin options through my Homemade Trials series!

For this installment, I compared a homemade blueberry muffin recipe with a mix and also some “fresh” blueberry muffins from the bakery section of my grocery store. Let’s see who wins! 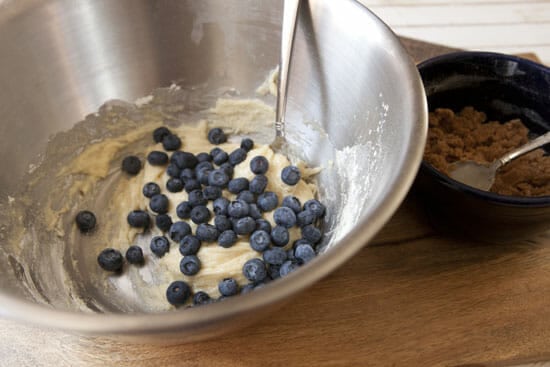 I didn’t use some fancy muffin recipe for my version. I literally googled blueberry muffins and based my recipe on the first result. The whole point is that these muffins aren’t anything fancy. I did use a lot of fresh blueberries though.

Lightly adapted from this allrecipes version.

1) Preheat oven to 400 degrees F. and lightly butter or oil your muffin tins.
2) Stir together crumb ingredients in a small bowl and set aside for later.
3) In a medium bowl stir together flour, salt, sugar, and baking powder for muffins.
4) Stir in wet ingredients and finally fold in blueberries.
5) Divide batter between muffins, filling each about 2/3 full. You should get 8-10 muffins.
6) Sprinkle each muffin with crumb topping and bake at 400 degrees F. for 20-25 minutes until lightly browned.
7) Let muffins cool a bit before serving.

Muffins are about as easy as it gets when it comes to baking. You basically just stir together all the dry ingredients, then stir in the wet ingredients, then fold in whatever add-ins you have (blueberries), divide the batter between muffin tins and top with the crumb topping.

The crumb topping probably led to me losing one of the categories, but man was it good. 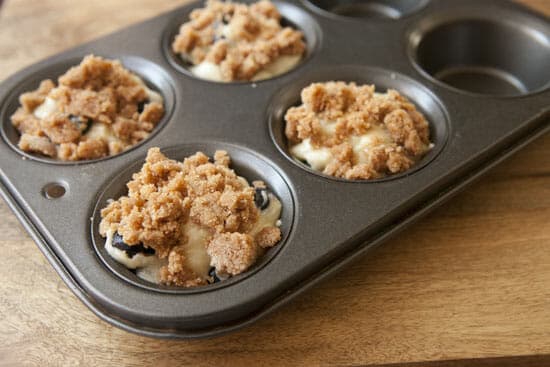 Let’s take a look at all of the muffins lined up. 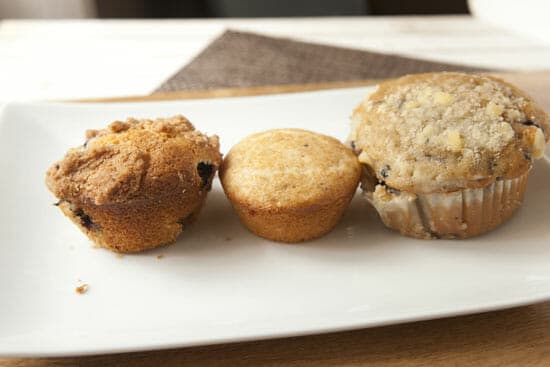 Let’s break down each category and see how my muffins did!

This one is a no-brainer. Obviously the bakery option is the fastest. The mix comes in second even though you still have to stir together ingredients for it. The real trick is that the mix muffins only bake for 14 minutes because they are so small so you gain some time there over the homemade ones which need 20-25 minutes to bake.

Oh well, TIME goes to the bakery version for sure. 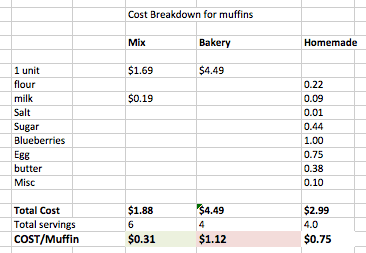 No surprises here really. The bakery muffins are super-expensive. Well, they are still cheaper than if you were to buy a muffin at Starbucks or something, but it’s not even close to the other two.

If I hadn’t used fresh blueberries and organic dairy for my version, I probably could’ve gotten close to the mix cost per muffin, but I doubt I ever would’ve come in below it.

The COST category goes to the MIX! 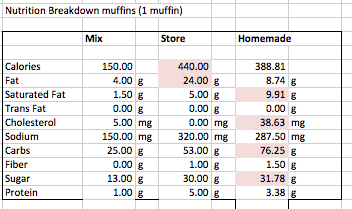 This category was super-hard to judge because all of the muffins were way different sizes. My homemade version and the bakery version where at least twice as big as the mix muffins so you can probably divide those categories by two to get a closer estimate.

Of course, none of the versions are really good for you because muffins are basically just big blocks of carbs and sugars.

I used real ingredients like eggs, butter, milk, and blueberries in my version which somehow makes it appear less healthy in a chart.  The mix version used all kinds of “food products” that read more like a science experiment than a recipe. You can see the full ingredient list for the mix here.

People can debate me on this one, but I’m calling this a TIE between the mix and the homemade. I think they are roughly the same if you divide the homemade in half. 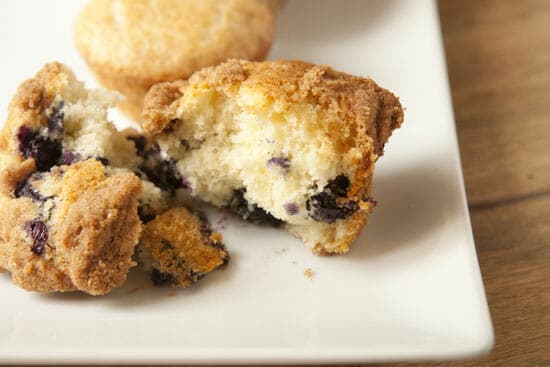 This one was sort of surprising actually. I had Betsy blind taste test the three different muffins and she ranked them as follows (I agree with her rankings as well):

1) Homemade. It’s no contest. The fresh blueberries and crumb topping rock. This is what a muffin is supposed to be.

2) Mix. Surprisingly the mix came in second. The important part about this is that the muffin needs to be freshly baked. If you let these sit for even an hour, they degrade pretty quickly. But right out of the oven, they aren’t terrible.

3) Bakery version. This was shocking to me because I thought these would be good. They looked moist, but because they were being stored in an airtight container they ended up really soggy and had a bad texture. I wouldn’t pay a buck for one.

Taste goes to Homemade. It’s not even close!

The bakery version definitely loses. They tasted bad, were expensive, and not worth the time it takes to drive to the store and buy them.

That said, this was closer than I would’ve liked between the mix and the homemade version. Maybe the homemade version takes a tiny bit longer to prepare (maybe 10 minutes), and has a bit more sugar and fat than the mix, but just look at those two muffins. It doesn’t past the smell test to me to give this one to the mix.

When I want a muffin, I want a freakin’ muffin and not some weird pale lump of baked chemicals with freeze-dried berry pieces. I vote for the homemade version for this one, but what do you think?

Are you a fan of the mixes? Leave a comment!

23 Responses to “The Homemade Trials: Muffins!” Leave a comment