It seemed like people really enjoyed the last Homemade Trials I did comparing boxed mac-n-cheese to a made from scratch version. I was pretty shocked at how close some of the categories ended up, especially cost and nutrition. So, I’m definitely going to make this a monthly series here. Based on the comments in the last post, a lot of you wanted to see a breakdown of Mashed Potatoes, so here ya go!

If you didn’t check out the last homemade trials, these are the criteria that I use to compare the homemade version with the store-bought version.

The Criteria. I picked four main criteria on which to evaluate my pre-packaged item versus the homemade version:

Time: How long does it take to prepare? Do I save any time by buying it pre-packaged?
Cost: When you break down ingredients, is it actually cheaper per serving?
Nutrition: How do the two versions shape up from a nutritional standpoint?
Taste: The only subjective criteria, but at least for me it has to be one because this is food after all people.

The Instant Stuff. There were about 10 different brands of instant mashed potatoes to choose from, but they all looked basically identical to me. I went with the most basic flavor.

If you’ve never made instant potatoes before, you basically just add boiling water to the flakes and BAM. Potatoes. Sort of.

To compete with the instant version, I made a really simple homemade mashed potato recipe using real russet potatoes plus some butter, milk, and garlic. Again, I tried to keep it as simple as possible just to hopefully make it a fair competition!

Let’s get into the trials!

I started a stopwatch right as I started each version. This might be a shock to you but instant potatoes DESTROYED real potatoes in the time department.

The time it took me to boil a few cups of water, stir it into some flakes, and fluff them up was about 8 minutes.

Meanwhile, peeling and chopping potatoes (I did this while I was waiting for water to boil), letting them cook, mashing them, and mixing in all the other stuff took a whopping 35 minutes.

Potatoes take some time to cook. There’s no shortcut really here so I have to give the time category to the instant variety.

Cost is a pretty easy thing to calculate in this case as long as you remember your receipt! The key here to figure out servings based on weight. I just weighed my instant and homemade potatoes when they were done, then looked up how many servings were in the instant mix (4) and figured out how many grams were in a serving of mashed potatoes.

So, I guess instant is still cheaper, but the one note on this is that I used pretty expensive ingredients. I used organic potatoes, milk, and butter.

I experimented a bit and found that if you could find potatoes for about .50 cents/pound, then you could keep the organic butter and milk and about match the instant costs. That’s not too bad if you ask me.

So I’ll give Cost to the instant variety, but with an asterisk that it’s doable to beat the cost per serving if you were to shop around a bit.

I had absolutely no idea how this one would shape up. Let’s take a look! 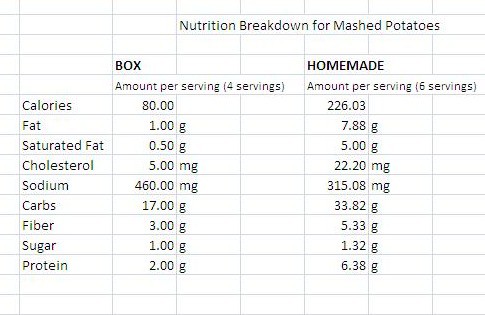 WELL. Crap. That didn’t work out as well as I hoped. It turns out that instant potatoes are basically air. They have very little real food in them as far as I can tell. As you can see, the instant variety has way less calories, fat, carbs, etc per serving.

I guess I have a few comments on this. For starters, most of my fat comes from butter and I guess you could cut that down if you wanted. I used 4 Tablespoons for my 6 servings and you could probably cut that down to two. It still wouldn’t get us close to the fat in the instant stuff, but it’d be closer.

Second, and more amazing to me, the instant potatoes, somehow, have less carbs than just a potato per serving. How this is possible is beyond me, but they’ve literally just removed carbs from the potatoes. That’s pretty impossible in a homemade version obviously.

The good news is that my version actually has less sodium along with more fiber and more protein. Plus, I don’t actually think that 226 calories for a nice serving of real mashed potatoes is all that bad.

If you’re curious what’s going on in the instant variety, here’s a shot of the ingredient list. I guess all of these things add up to basically nothing.

I’m honestly torn on how to call this one. Part of me wants to call it a TIE because the homemade version has some good stuff in it and none of the preservatives, but it does have WAY more fat and calories.

I’m going to call it a TIE but I’d love to hear what you all think on this one.

This one is easy. Buttery, creamy, garlicky mashed potatoes or wet cardboard?

Actually, I should give the instant version a bit more credit. They weren’t horrible. They actually tasted exactly like any and every buffet line mashed potato that I’ve ever had. The same smell and consistency.

The key thing about the instant variety is that you have to eat them as soon as possible. If they cool down or sit for too long, they congeal into this strange mass of gunk that could be used to caulk your tub.

So, I can say, without doubt, that taste goes to the homemade variety!

If you just look at the results (TIME=Instant, COST=Instant*, NUTRITION=Tie (debatable), TASTE=Homemade), then I guess I have to give it to instant.

Of course, the problem is that if you could judge taste on a scale, the instant would have been about a 3 for me while the homemade was like an 8 or 9. So, the question is, are you willing to give a few minutes, a few cents, and a few calories for real food that tastes better?

It’s honestly a hard question. I thought this was going to be a shoe-in for the homemade variety, but when you break it down, it’s just not that clear-cut.

So, what do you think? INSTANT or HOMEMADE?

If you want the recipe that I used for my homemade version, click the PRINT THE RECIPE link.

49 Responses to “The Homemade Trials: Mashed Potatoes” Leave a comment