It’s been a few months since I’ve done a Homemade Trials and since it’s one of my favorite style of posts that I write these days, I figured it was long overdue.

A month or so ago, I got an email from a reader and blogger friend, Dan, asking me to tackle hummus for a homemade trials. The question was kind of a multi-part one.

First, does it ever make sense to make your own? Is it really cheaper and tastier?

Second, does it matter if you use dry beans or canned beans?

So I set out to compare three styles of hummus in the categories of TIME, NUTRITION, COST, and TASTE. After all of that, we’ll see if we can find a winner!

For this trial, I used my favorite store brand of hummus, Sabra. I think it has delicious texture and flavor and knew that it would give me a good run for my hummus.

For the homemade versions, I used a very simple recipe:

Homemade hummus compared to store bought hummus when it comes to cost, nutrition, taste, and time.

2) Turn on food processor. As it runs, drizzle in oil until smooth.

3) Serve with pita or crackers.

I realize that you could spice this up as much as you wanted by adding roasted red peppers, paprika, roasted garlic, or pine nuts, but I just wanted to keep it simple on my end.

Let’s get on with the trials!

Let’s get the easy trial out of the way first. Obviously, it takes no time to open up a container of Sabra.

It took me about 15 minutes to whip up my hummus using the canned variety. Most of this time was dealing with the chickpeas. If you want a really creamy hummus you have to remove the shells from each chickpea. They rub off pretty easily, but it definitely took me a few minutes to get them mostly cleaned.

Once the shells are off though, it took me just a few minutes to toss everything in a processor and pulse it up.

Meanwhile, the version with dried chickpeas obviously took longer. I had to soak the chickpeas and then simmer them for about 90 minutes. Then I had to shell them and blend them just like the canned version. While this was largely unattended time, it still took awhile.

So TIME goes to store-bought, followed by canned, and dried. No surprises there.

I wasn’t really sure how cost was going to work out. I would think that homemade would be cheaper, but frankly, two of the ingredients that go into hummus (olive oil, tahini) are pretty pricey! It’s possible that it’s cheaper for a company like Sabra to buy them in bulk.

Let’s check out the chart! 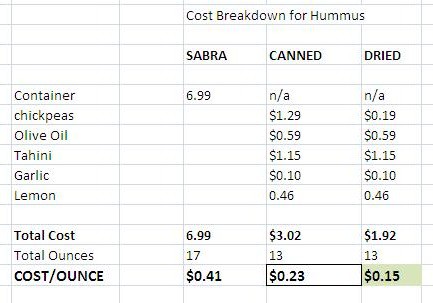 Whoa! That’s an enormous difference in cost. Even though the basic hummus recipe makes less hummus than the Family pack of Sabra hummus, the cost per ounce is WAY down for both the canned and dried version.

The cost difference between canned and dried is what it is because a pound of dried chickpeas cooks up to 48 ounces of cooked chickpeas which can obviously be used to make a lot of hummus.

Just for effect, if you were to eat a container of Sabra per week, you would save $233 over the course of a year by making an equal amount of hummus with dried beans or $160 in savings if you used canned. That’s not shabby.

I had no idea how nutrition would play out at all. I figured they would all be pretty similar. Let’s check out the chart and see where we stand! 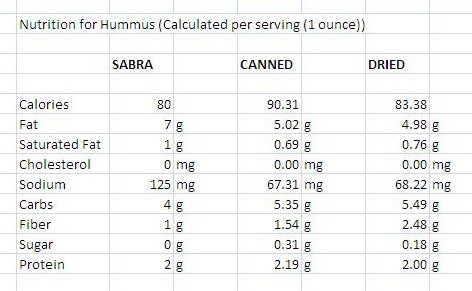 Well, yea. Nothing too exciting. They are all basically the same.

If I had to pick a winner, I would say dried just because it has slightly less fat than Sabra, less sodium, and way more fiber than both (I double checked the fiber cause it seemed weird).

In reality though, this is a tie for nutrition. Hummus is pretty good for you whether you buy it or make it. Go figure.

This was the wild card category as always.

I knew I would be biased on this so I called in my official taste-tester: my wife. I lined up each sample and she tasted each version blindly with a chip. These were her results:

Least Favorite: The dried chickpea variety. She said the tahini was over-powering. This couldn’t be due to the actual tahini because there was the same amount in the canned version. She also said the texture wasn’t quite right.

Favorite Flavor: Sabra. This wasn’t a total shock to me. After looking at the ingredients in Sabra, they add a number of spices into even their original flavor. I think if you added some flavors and spices though you could get close.

Favorite Texture: Canned! This was a total shock to me because I always thought Sabra had the best texture. But after peeling the chickpeas, she picked the canned version as the best texture.

I consider texture to be as important as flavor for hummus so I’m calling this one A TIE between canned and Sabra.

After all of this analysis, I think there’s one pretty clear conclusion actually. It seems like it is completely worth it to make your own hummus BUT you should used canned and not dried chickpeas unless you are on a very tight budget.

Even though you would save a bit more money by using dried, I think the time difference is enough to swing it over in the favor of canned. Also, it was a lot easier to get a good texture using canned.

With a little practice and some spices, you could easily make a hummus at home that rivals one of the best in the stores for about half the price and a few minutes a week. If you eat a fair amount of hummus, it’s pretty clear that that’s the way to go in my opinion.

What do you think? Are you surprised by the conclusion? Will this influence your shopping?

39 Responses to “The Homemade Trials: Hummus” Leave a comment