These homemade trials posts are quickly becoming my favorite series to do.  It’s so fun to try to beat out store-bought stuff!

And I’m always surprised by the results.

As always I compared a few different kinds of store-bought puddings (the snack pack and the standard instant mix) with a homemade version made with real milk and chocolate.  I compared the results with regards to TIME, COST, NUTRITION, and, of course, TASTE.  Let’s check out the results!

When it came to time, I knew my homemade version was a surefire loser.  The snack pack takes approximately 5 seconds to pop open.  So that’s clearly the time winner.  Even the instant mix takes about 5 minutes to mix up and then it has to chill in the fridge for an hour or so to really set up nicely.

Meanwhile, my homemade version took about 25 minutes to whip up from scratch.  Then it had to cool completely to set.

This was an easy one then.  The TIME category goes to the Snack Packs!

I figured this one would be close, but that my version would probably lose.  I mean, real chocolate is pretty expensive.  I did splurge and buy the nice stuff because if I’m making chocolate pudding, I want it to be good.

So I lost on cost, but it was actually closer than I thought it would be.  If you could save some money on the chocolate and milk, you could easily match the instant costs I think. 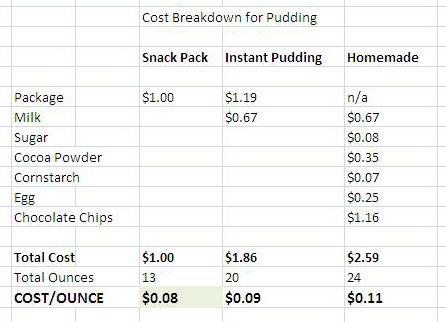 Here’s where I thought things might get interesting.  Of course, the thing to remember about these instant mixes and snack packs is that they have a lot non-food stuff in them.  I mean, heck, the snack packs don’t even have to be refrigerated! They claim to have “No Preservatives” in them, but anytime you see a product theoretically made with dairy that doesn’t have to be refrigerated, something weird is going on.

The instant mix doesn’t bother me as much since you add milk to it.  Ironically, it’s the product with preservatives in it. 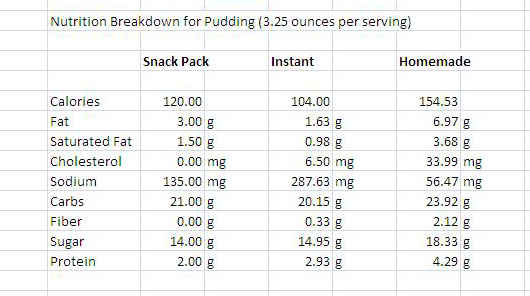 This one was tough for me to look at because it’s pretty hard to say that the homemade variety won.  There’s more fat, more calories and more sugar per serving.  The only saving grace for the homemade version is the low sodium content and the protein increase.

But you know what?  My version is made with real food.  So take that. Here’s a list of a few of the ingredients in the snack packs and instant varieties that my version doesn’t have:

But facts are facts and so I guess I’ll give NUTRITION to the Instant variety mainly just because it seems to have less fat and more protein and it’s made with milk.

At the end of the day though, you’re eating PUDDING, so nutrition really shouldn’t be a big player in your decision.

In my opinion, what pudding I’m going to pick is almost always the one that tastes the best.  So let’s do the big category:

I actually knew this was going to be hard.  I mean, I grew up eating the instant variety of pudding almost every week.  Betsy did also.  Frankly, I love the stuff.

But the real stuff had real chocolate in it.  A lot of it.  I thought maybe it could stack up.

I set Betsy up with a blind taste test of the three different varieties.  I made sure to keep them all in the fridge so they were the same temperature.

This is what she saw…

I wish I had this test on video.  It was pretty hilarious.

She tasted them all.  Thought about it for about half a second and then said, “Well, the red one is definitely the worst.  It’s way to chocolatey.”

That was, of course, my homemade version.  We both picked the instant version for taste.

I didn’t mind the homemade version, but I agree that it was a bit too heavy.  Of course, this could be the recipe that I used which I’m not even going to bother reprinting since it can’t beat instant pudding mix.

Begrudgingly though, I have to give TASTE to the Instant Mix.

Well, it finally happened.  My homemade version took a loss in this one.  I think with everything put together, I’m going to give the win to the instant variety.  Honestly, I’m surprised that my homemade version doesn’t lose more often.  I mean, these products have teams of people engineering their flavors and millions of dollars in research going into them.  How am I supposed to compete with that?!

At the end of the day though, it could be that Betsy and I chose the instant variety because we’ve been eating it since we were kids.  It’s literally the flavor that I think of when I think of pudding which is great if you’re Jell-o.  It’s also very possible that the recipe I used was a bomb.

So.  Here’s a challenge.

Someone send me a pudding recipe that can beat instant pudding mix in a taste test.

21 Responses to “The Homemade Trials: Chocolate Pudding” Leave a comment