I’ve been putting off doing this homemade trial for some time now because I’ve been scared of the results.

I was afraid I would lose against the store bought mixes which would devastate me because I love making biscuits at home and tout my biscuits as pretty darn good.

As always, the challenge with this Homemade Trial is to compare my homemade biscuit to a few store brands and see how they stack up!

I use the categories of TIME, COST, NUTRITION, and TASTE to do the comparison.

There are two popular biscuit type mixes that I wanted to compare for this version: Bisquick and Pioneer mix.

They are both basically just mixes of flour, leavening ingredients, flavors and preservatives. All you have to do is add milk to them and you have dough. I used buttermilk for mine just to keep that variable the same for my biscuits.

I don’t have some fancy biscuit recipe, but I do have a really good biscuit recipe. It has real butter in it (shock) and buttermilk (double shock).

I knew that it produces biscuits that will be hard for a mix to beat.

I compare a homemade buttermilk biscuit recipe to two popular store bought brands in the categories of TIME, TASTE, NUTRITION, and COST.

Adapted from a Tyler Florence recipe.

1) Start biscuits by mixing flour with salt and baking soda and baking powder in a large bowl.

2) Cut in cold butter or shortening using your fingers until it resembles small pea-sized pieces in the flour.

3) Add buttermilk and mix until the mixture forms a loose dough. Don’t over-mix the dough.

4) Scoop the dough out onto a floured surface and roll it out in a rectangle shape. Fold it into thirds over itself. Then roll it out gently and do it again. Finally roll it out until it’s about 1 inch thick.

5) Cut the biscuits out of the dough. You can either cut out circles or just slice the dough into rectangles.

6) Add biscuits to an ungreased baking sheet and brush them with some extra buttermilk. Then bake them at 400 degrees for 20 minutes until they are golden brown.

Let’s get down to the breakdowns!

Honestly, I thought TIME would be a wash. Even though they are mixes, you still have to mix in the milk and shape and cut the biscuits, so how much time can you really save?

The real savings though comes during cooking time unfortunately. I’m not sure how, but the mix versions only take 10-13 minutes to bake while my homemade version takes 20 minutes.

I would say it is about a ten minute difference between the mix and homemade, but I still have to give TIME to the store-bought mixes. 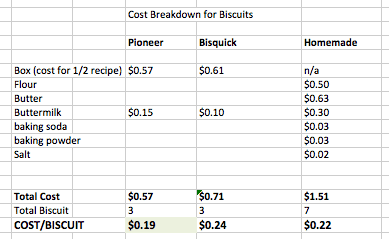 I was worried about cost for one reason: Butter. Butter is expensive and you don’t need any of it for the mixes.

My homemade mix came out in the middle though and frankly, I used really expensive flour (King Arthurs unbleached white) so you could knock a few cents off of the homemade version if you went with a cheaper flour.

Every version is within a few cents though so I’m saying that COST is a TIE.

Another category that I was really worried about was nutrition.

I  mean… I used real butter for my version and lots of it. How could I not lose this category?! 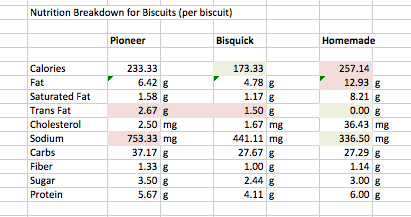 As you can see, the results are all over the map. There isn’t a clear nutritional winner here and that kind of makes sense. After all, nobody eats biscuits to be healthy.

The good news is that my homemade version has ZERO trans fats, which are really bad for you, and way less sodium than the mixes. The bad news is that it has more calories and more overall fat although I’m not in the camp that thinks fat is necessarily bad.

I’m really tempted to give this to my version just because of the Trans fat deal, but I think to be fair I have to call NUTRITION a TIE. Biscuits aren’t healthy… doesn’t matter the source.

I was shocked by this category because I didn’t blow the mixes out of the water. To be honest, they were pretty tasty right when they came out of the oven. The homemade version had a slight edge just because it was really flaky and tasted like delicious butter. It was everything you wanted in a biscuit, but the mixes also produced pretty decent biscuits.

The real test was that I let all the biscuits cool down complete and then tasted them about four hours later. It wasn’t even close.

The two store-bought versions had turned into tiny bricks. They were super-hard and tasted kind of chemically. The homemade ones were as good as they were right out of the oven, but they were still flakey and butter tasting. They were still pretty good, in other words.

So my advice is that if you are going to use a mix, eat them immediately! Overall though, I’m giving TASTE to my homemade version.

This was a close one! We had two ties and two pretty close other categories.

The thing that shocked me the most I think was that the store-bought mixes produced pretty solid biscuits right when they came out of the oven. They were salty and good and would be fine with Jam or honey or gravy.

Mine were better though. And at the end of the day, if I’m eating a biscuit, I want the best biscuit I can get so I’ll keep making these homemade whenever possible.

Plus, I’m pretty sure I was very lenient on the Nutrition category. Trans fats are nasty stuff.

What do you think? Did I call this one right?

22 Responses to “The Homemade Trials: Biscuits” Leave a comment