Betsy and I eat a lot of granola. It’s our go-to breakfast for at least half of the year I would say. In the summers we do smoothies and if it’s really cold I’ll make warm oatmeal, but most times granola is our breakfast situation.

As you might guess, I’ve made my fair share of granola variations over the years and I really think that it’s pretty easy to make at home. Plus, you can customize it to your liking which is nice.

That said, there are a ton of very tasty granola options out there and most of them seem reasonably priced.

So, I thought I would run four different granola variations through my Homemade Trials and see what comes out on top!

I have a really basic granola recipe that is the base for many variations. You can add to it or subtract from it without too much worry but it’s a great place to start.

Is it worth it to make your own granola at home? I test out a homemade version versus a few popular store-bought brands.

2) Once oat mixture is evenly mixed, drizzle in honey and stir well to combine.

4) Bake the granola for 20-25 minutes and stir the granola every five minutes to prevent it from burning. It will most likely cook faster on the outer edges of the pan so stir it well to redistribute the heat.
If the granola is burning or cooking too quickly, turn your oven down 25 degrees and continue stirring regularly.

5) Once granola is baked, let it cool for a few minutes and then stir in dried fruit.

6) Store granola in an airtight container at room temperature for up to three weeks.

There are dozens of granolas out there, but I tried to pick three that varied in price but were pretty close in ingredients to keep the nutrition and taste competitions fair.

I went with Kroger’s store brand, Cascadian Farms, and a bulk granola from a local store, Vitamin Cottage.

Let’s get right into it and see how these three products stack up with my homemade version!

As always, I’m going to lose time. The granola isn’t hard to make at all, but it does take about an hour from when you start to when the granola is cool and you store it.

Of course, most of that hour is with the granola baking so you can do other stuff, but it’s still work so TIME has to go to the store-bought in this trial.

I was fairly certain that I would do okay on cost, but then again, I was using some expensive ingredients like almonds, honey, and a few different seeds.

Let’s see how I did!

Not bad! Kroger beat me in per serving costs, but that’s to be expected I think. I destroyed the other two brands. If you don’t think 14 cents per serving is substantial (me versus Vitamin Cottage for example), imagine this: Betsy and I probably both eat 1.5 servings per day for breakfast. That works out to about $25 bucks in savings for us every year if we made homemade rather than buy that brand.

It’s not a huge amount, but it’s something. I think it’s enough to say that MY VERSION wins COST.

Honestly, I was pretty sure this category was going to be a tie. Most of the versions had very similar ingredients. 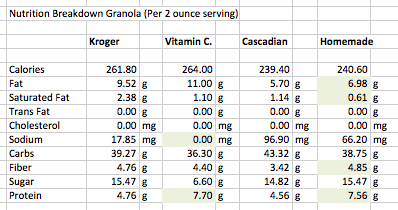 This was actually one of the more complicated nutritional calculations I’ve had to do and it’s possible I screwed it up. The fact that it is so close to the other varieties makes me think that I probably did it right though.

Calories were all pretty equal across the board, but there were a few categories that I think separated my version: Fiber and Protein. Those are the things I look for in a good breakfast and my version does great in those categories.

It’s a pretty tough call on this one, but I think my homemade version barely wins on Nutrition.

I could see how you could argue for a tie though!

I was super worried about taste. I just wasn’t positive that I would beat out all of these different brands. I knew that I was particularly biased so, as usual, I asked my wife to taste them all.

Her rankings were as follows from her favorite to least favorite:

Here are my thoughts on this: I think she picked the CF version because it has vanilla in it and she is a vanilla fiend. Also, once I looked at the nutrition information I figured out why the Vitamin Cottage version tastes so bland by itself: NO SALT.

I was happy with second place in this taste test though. I’m going to call Taste a tie. There’s not a huge amount of difference between my version and some of these.

That said, I purposefully tried to mimic some of the flavors in these store-bought versions. You don’t have to do this though obviously and you could easily make a version at home that fit your tastes exactly.

This one is a really tough homemade trial to judge honestly. Time goes to store-bought, cost goes to homemade. Nutrition is essentially a tie and taste can be a tie.

So it seems like kind of a wash to me.

So here’s my rule: If you are trying to save money, homemade granola can be a great way to make sure you have a reasonably healthy and cheap breakfast every day.

Meanwhile, if you are pressed for time, don’t feel bad about buying granola at the store. Just be sure to check ingredient lists and make sure the version is using good ingredients and not too much sugar or salt.

If you can find a store-bought version that you like, buy it! If you can’t, or want to experiment, make it!

What do you all think? Did I call this one right? How often do you buy or make granola?

26 Responses to “The Homemade Trails: Granola” Leave a comment