I have some seriously exciting news people.

It’s been pretty hush-hush, but I think we’re at the point that I can start talking about it.

It all started last Christmas when Betsy and I went home to visit my parents for the holidays. I’m from a small town in Wyoming called Green River (which also happens to be an awesome CCR song). A few of my best friends from high school live all over the country now, but we always manage to make it back to Green River every year for Christmas. We hit up the local watering hole every year and catch up about life, work, etc. It’s become something that I look forward to every year.

On the most recent visit, three of my friends started complaining about their jobs and after a few napkins worth of notes and many glasses of Bud Light (the Wyoming drink of choice), we came up with a plan to pool some of our funds and chase our dreams: owning a brewery.

The Players. I seriously have never had any desire to open a restaurant because there’s just too much crap to deal with, but I trust all of these guys like brothers and we all happen to have a unique set of talents that I think could come together to make the perfect little spot. Let me give you the run-down.

Nick. That’s me. If you didn’t know, I like to cook. I’m going to be in charge of coming up with a delicious and unique menu. I think it’ll be challenging but fun. So far I’m basing a lot of my restaurant kitchen knowledge off of the hit TV show Kitchen Nightmares. In other words, I know what not to do.

Stew. Stew is Mr. Brew. He has been an avid home brewer for years and obviously a brewery will need top-notch beer (slightly ironic because the idea was hatched over Bud Light). Stew already makes really good small batch brews and he’s working on learning how to make slightly larger, microbrewery varieties.

Ryan. Ryan’s the business guy. He’s started and sold a few small businesses since high school and has a knack for keeping things in the black. He’s also going to be in charge of the marketing and day-to-day stuff that I don’t want to deal with. Go Ryan go.

Seth. Seth is the guy that really pushed us over the edge. He made a lot of money after he graduated working in corporate finance and now pretty much hates his life. He’s putting up most of the money for this crazy venture. He’s a smart guy though and I have no doubt that he’ll become a restaurant expert in no time.

The Name. We came up with the name “The Green River Brewery” because we want it to be a low key brewery type place. Green River, obviously, because it’s where we are from.

The Location. Ironically, we aren’t planning on opening up this spot in Green River although we are paying some homage to our hometown with the name. There’s just not enough people there to really support a brewery like we have in mind so we are moving a bit South to Denver, CO. That were Ryan lives now and we figured it’s as good a place as any to open a kick ass brewery. Luckily, Betsy is on board with the move!

The Details. Well, we took a photo of the place we’re thinking about buying and we’ve been playing with logo designs on the outside… what do you guys think?! This is a first draft of our sign! 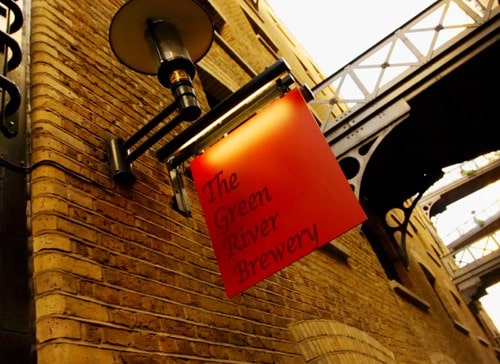 The sign might need some work, but the building is awesome. It has this great old world feel.

The Menu. Even though we are many many months away from actually getting this place running, or even moving there for that matter, I’ve been thinking a lot about the menu. It’s gonna be a simple menu focused on making a lot of things from scratch: homemade bacon, cured salmon, lots of smoked things, and lots of fresh baked bread.

I’ve been working on a more thorough sample menu. You can check it out HERE.

I’m really excited about this next chapter in my life and I’d love any first impressions you guys have on the sign or especially THE MENU!

34 Responses to “The Green River Brewery” Leave a comment