Over Labor Day Weekend, Betsy and I and a few friends took a trip down to the Delaware coast to get in some beach time and visit one of our favorite breweries, Dogfish Head. If you aren’t familiar with Dogfish Head, they have a really interesting story. They are a craft brewery that somehow has held out from the massive brewery buy-outs that tend to happen (See Beer Wars in which the founder of Dogfish Head is featured).

This means that they are privately owned so they can grow at their own pace and really make whatever the heck they want to make. It’s very obvious when you try a Dogfish Head beer that you are drinking something different.

In my opinion, it’s some of the best beer you can find in the U.S. these days.

So I brought my camera along for the ride and thought I’d share some of the photos!

The Brewery. Dogfish Head has grown a lot in the last 15 years or so and they’ve had to move around a few times to accommodate the growth, but these days their brewery lives in the small, quaint town of Milton, Delaware.

When you drive up to the brewery, the first thing you notice is these enormous silos outside. These are to accommodate the huge amount of grain that goes into their beer. For a lot of their brews, Dogfish Head uses 2,3, or sometimes even 4 times as much grain and barley as normal beers. This requires some storage space you see. 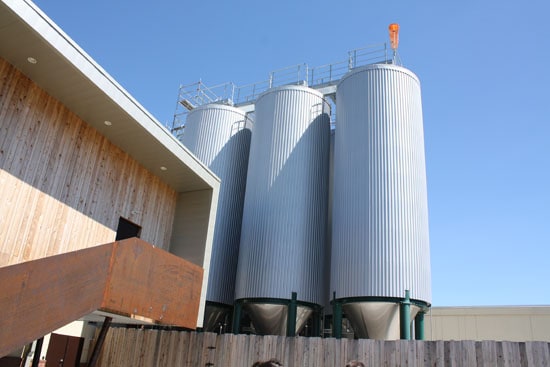 OK. I lied. The first thing you notice isn’t the silos.

The first thing you notice is the badass tree house in front of the silos. 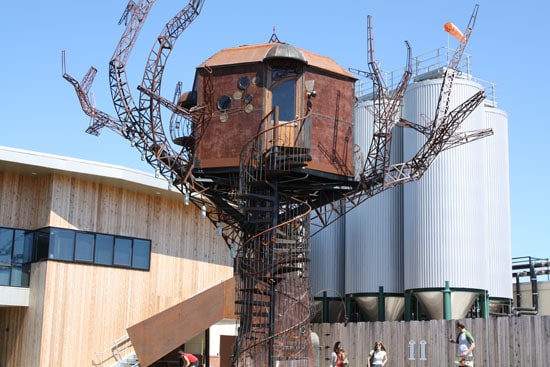 When you walk into the brewery, there’s a lot to keep you occupied while you wait for the tour (by the way, the tours are free. You just have to reserve a spot in advance).

One of my favorite things to check out was this huge wall of letters, photos, and cartoons all sent from devoted Dogfish fans. 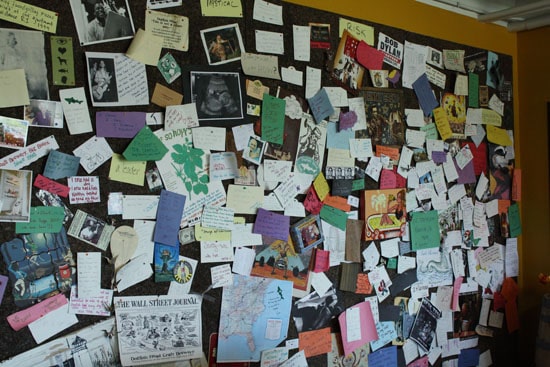 The tour was about an hour long, but it’s very interesting. Our tour guide started off by talking a bit about the beer making process and then he explained some things that make Dogfish Head beer really unique.

If you don’t know, you really only need four things to make beer: barley, hops, yeast, and water. If you have those four things, then you can make beer!

Here’s some barley that they had sitting out for demonstration purposes. 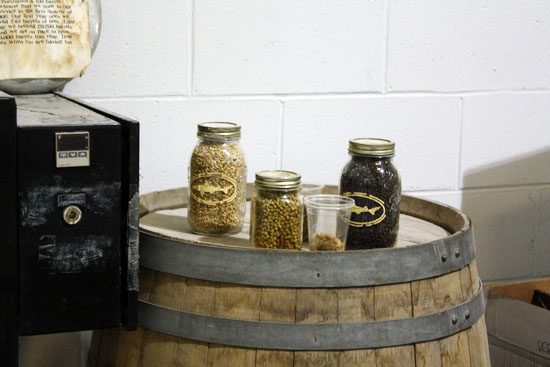 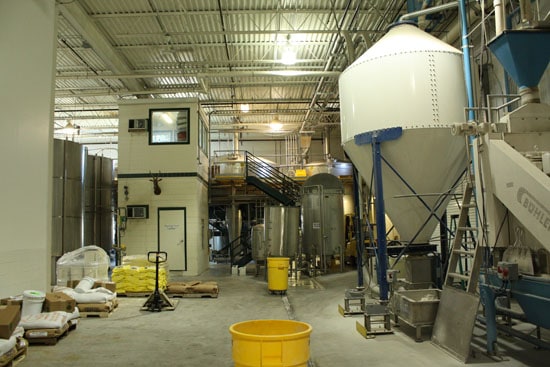 There was a lot of cool equipment in the brew house. This, for example, is the huge scale they use to measure out the barley for each batch. 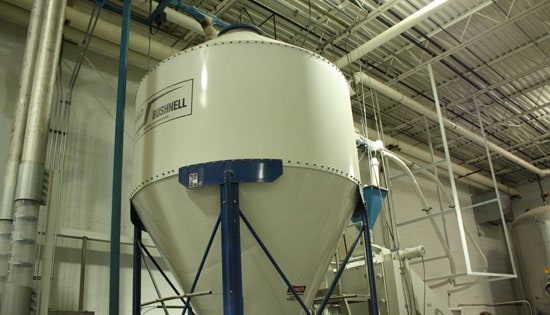 These are the brew kettles that they use to cook the beer. While we were there they were making a batch of their most popular beer, 60 Minute IPA. 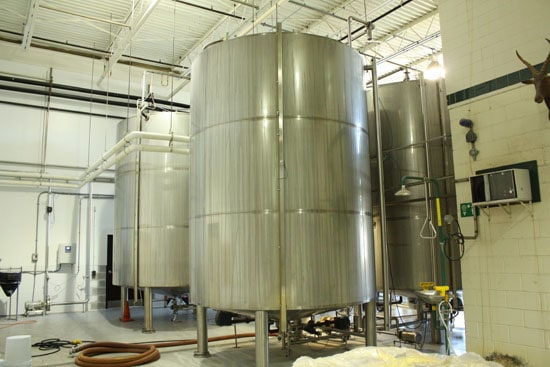 Sir Hops A lot. One of the things that I most respect about Dogfish Head is their ability to do stuff completely differently than the rest of the beer world. For example, they have a series of IPAs called 60, 75, 90, and 120 minute IPA.

Normally, when you brew beer, you add some hops, which have a bitter and flavorful taste, right at the beginning of brewing and right at the end. That’s the way that beer has been made for centuries. But Sam (the founder) wondered what would happen if you just constantly added hops throughout the entire brew process.

What happens is you make a really delicious beer!

It helps to have some equipment for it though, so they built this cool little machine that automated adding the hops to the brew kettles. Now I think they use computers to do it, but they keep Sir Hops Alot around just in case. 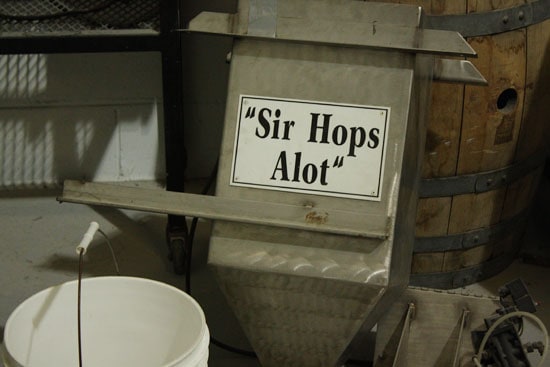 After the beer is brewed, it has to be fermented which is where it develops even more flavor and also when it becomes alcoholic.

This process happens in the… 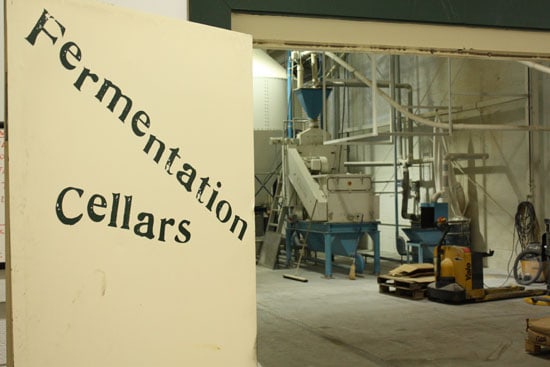 Most of the beers get fermented in stainless steel which is standard, but they do have a few beers that get fermented for at least part of the time in wood, kind of like some wines. This is also kind of unheard of for beer.

One of the beers that is made in these, the Palo Santo, was one of my favorite that I tried on the trip. They are a bit pricey, but at 12% alcohol, one is more than enough for most humans. 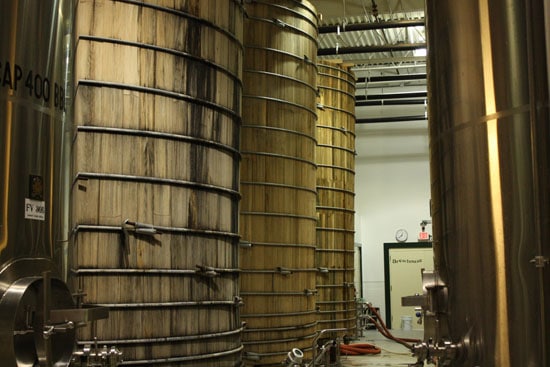 One final cool thing that I saw on the tour was one of the original corkers they used to use to seal their bottles. Now they use only bottle caps, but they used to cork their 750 ml bottles much like a wine bottle.

They stopped doing it after a few exploding bottle incidents… 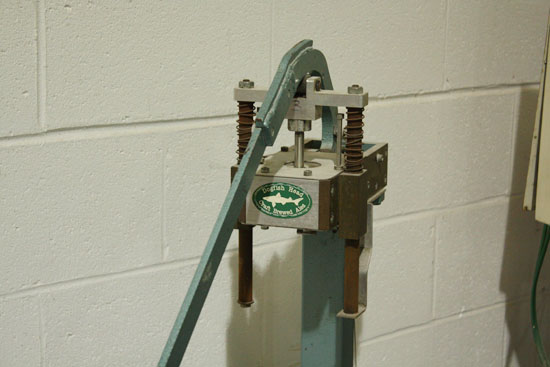 Of course, the last part of the tour involved tasting! You got four samples of beer and I must say that for a free tour, they were pretty good sized samples considering the alcohol content of some of the beers!

These little sharks made sure you didn’t go over your limit! 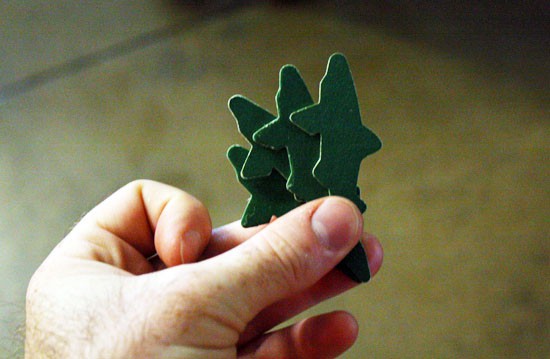 The Brewpub. If you’re making a day of the trip like we were, it only makes sense to take the 20 minute drive down to the Dogfish Head brewpub after the tour so you can have some food and drink even more delicious beer. 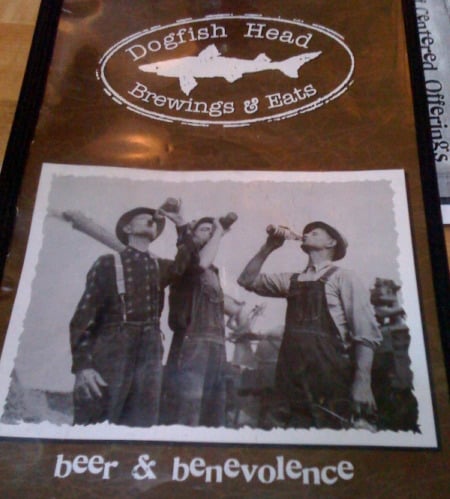 The Distillery. Oh I forgot to mention. In addition to beer, they also distill all the major kinds of liquor. At the pub they had a liquor sampling that we just couldn’t pass up. We just passed around the shot glasses so everyone could get a taste.

My favorite was definitely the brown honey rum. 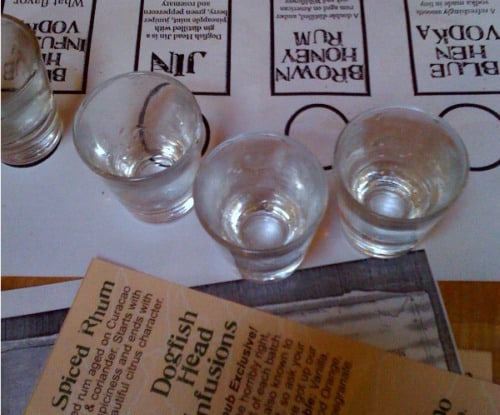 We of course tried a lot of different beers. We’d basically just all order something different and then pass them around.

The craziest beer we tried was the World Wide Stout. This is an insane beer. I’m pretty sure that they said they used SIX times as much grain as normal. It’s 18% alcohol. It costs $18 for a 12 ounce bottle. One bottle has 600 calories.

We split one 12 ounce bottle six ways. It was really good. 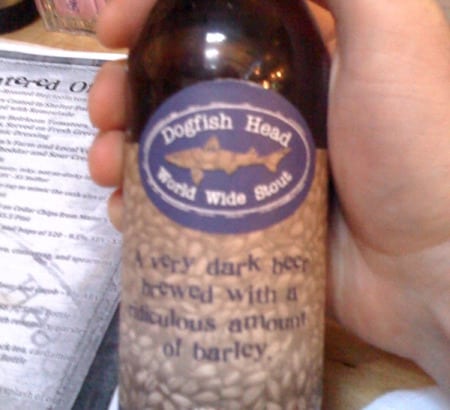 So if you happen to be around the Delaware area, I really recommend their tour. It was fun and light-hearted and you’ll get to try some great beer.

They are starting to distribute throughout the U.S. so if you happen to see some, give it a shot. It might be a few bucks more than some other beers, but trust me, you won’t be disappointed.

Any other Dogfish fans out there? If you have another favorite craft-brewed beer that you like, leave a comment!

10 Responses to “The Dogfish Head Brewery” Leave a comment