The Dietary Guidelines for Americans

Yesterday the government released a report that it produces every five years called The Dietary Guidelines for Americans. I spent a few hours poking through the 112 page report and thought I’d summarize the 23 recommendations and my thoughts on the report.

Before I get into specifics I should again note that I’m not a certified dietitian, just a certified eater. I do read a lot about these things and consider myself somewhat versed in what all these recommendations are actually saying. But yea… I have no degree on my wall, so take that for what it’s worth.

Before diving into a project like this, I always ask myself two questions:

1) Who Wrote the Report? Over five years, roughly 30 people with lots of letters after their names work on this thing. I was half expecting there to be a number of representatives from large food companies on the panel that wrote the report, but that’s not what I found at all.

After spot-checking a few of the authors, they appear to be all very qualified in their fields which range from dietary studies to preventive medicine. Most of them are lifelong doctors and/or professors. I didn’t check all the authors, but didn’t find evidence of any of the ones I did check working for large food companies or lobbying firms which would’ve raised some red flags in my mind.

2) Who is the Intended Audience? This report is pretty dense at times and most of the recommendations are based on what appears to be pretty thorough research. Of course, the government doesn’t actually expect every American to read through a 112 page report.

This is where problems can pop up because a lot of times people will develop materials or programs around only pieces of this report (the pieces that benefit them, their companies, or their constituencies) and leave the rest of the report on the wayside. The end result is almost always an incomplete picture.

So let’s get into the actual recommendations and see if anything seems especially good or bad.

The main pieces of the report are in four chapters and each chapter starts with a few key recommendations that are then backed by lots of graphs, charts, and data.

Here are the four key recommendations from this chapter.

Prevent and/or reduce obesity through improved eating and physical activity behavior. Umm… okay. I’m not exactly impressed by this recommendation. It took five years to recommend that?

Control total calorie intake to manage body weight. For people who are overweight or obese, this will mean consuming fewer calories from food and beverages. This one may seem equally silly, but I’ve never actually read something from the government telling people to eat less. That’s a new angle.

Increase physical activity and reduce time spent in sedentary activity. America: Get off your ass.

Maintain appropriate calorie balance during each stage of life. Kids don’t need as many calories as adults. Pregnant women need a variety of different vitamins.

Ok. So the recommendations in that chapter didn’t completely wow me except for the push to eat less in general.

Foods and Food Components to REDUCE

Again, a direct call for eating less is a real change. These recommendations seem to have a bit more substance to them. 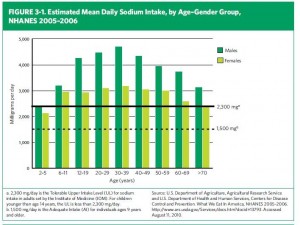 Reduce daily sodium intake to less than 2,300 mg and 1,500 mg for some people. This is a lot harder than it might seem. The hidden part of this recommendation which is in the data they present is that the only way to really accomplish this is to greatly reduce the amount of processed foods you consume. They recommend cooking most things at home so you can control salt.

Consume less than 300 mg per day of dietary cholesterol. Again, hard to do with processed foods.

Keep trans fatty acid consumption as low as possible, especially by limiting foods that contain synthetic sources of trans fats, such as partially hydrogenated oils, and by limiting other solid fats. I was hoping for a flat out recommendation to not consume any trans fats. Given that some countries outright ban the stuff, I wish they were a bit more forceful with this one.

Reduce the intake of calories from solid fats and added sugars. Again, a direct attack on processed foods.

If alcohol is consumed, it should be consumed in moderation—up to one drink per day for women and two drinks per day for men—and only by adults of legal drinking age. This has been pretty standard for as long as I can remember.

This is a much more substantial chapter in my mind and is basically an all out assault on reducing the amount of processed foods we eat as a nation. It’s groundbreaking only in that an official government document is saying it.

Foods and Nutrients to Increase

They made it clear what we should eat less of, so let’s see what they want us to start eating more of.

Increase Vegetable and Fruit Intake. Bam. That’s about as obvious as it can get. I like it.

Eat a variety of vegetables, especially dark-green and red and orange vegetables and beans and peas. Again, like the focus on vegetables.

Increase intake of fat-free or low-fat milk and milk products, such as milk, yogurt, cheese, or fortified soy beverages. The thing that bothers me about this recommendation is that it’s normally recommended because of calcium, but it seems to give people free reign to eat grilled cheeses for every meal. Those people would be better off by just taking a calcium supplement, in my opinion.

Choose a variety of protein foods, which include seafood, lean meat and poultry, eggs, beans and peas, soy products, and unsalted nuts and seeds. I think the behind-the-scenes message here is eat less meat.

Increase the amount and variety of seafood consumed by choosing seafood in place of some meat and poultry. I guess this is okay. I’d rather the meat be substituted more by protein rich vegetables.

Use oils to replace solid fats where possible. Okie Dokie. 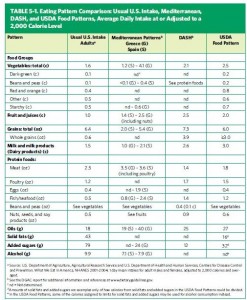 Choose foods that provide more potassium, dietary fiber, calcium, and vitamin D, which are nutrients of concern in American diets. These foods include vegetables, fruits, whole grains, and milk and milk products. Sounds good to me.

This all sounds like a move in the right direction to me which is a more vegetable-based diet. Even as a pretty serious carnivore, it’s a fact that vegetables are horribly under-rated in America.

Select an eating pattern that meets nutrient needs over time at an appropriate calorie level. Sounds good to me. A bit generic though.

Account for all foods and beverages consumed and assess how they fit within a total healthy eating pattern. Writing things down is a great way to monitor what you eat. Not that anybody does it.

Follow food safety recommendations when preparing and eating foods to reduce the risk of food borne illnesses. Probably not a bad idea so you can avoid dying.

Ok. So I guess I don’t have a lot of negative things to say about this! With America teetering on about 2/3s of the population either overweight or obese, I hope that educators can find a way to start pushing people to make some of these changes.

You can check out the full report here which is filled with tons of graphs and data detailing the evidence supporting all of these recommendations. Some of the graphs are really interesting and shocking.

I’d love to know what you all think about these recommendations. Are there any that shocked you? What would you add to the list?

10 Responses to “The Dietary Guidelines for Americans” Leave a comment