Betsy and I don’t watch a ton of TV and I always feel perpetually behind on shows. People are constantly asking me if I’ve seen this show or that show and generally the answer is no.

As I binged through the most recent series on Netflix, I found myself wondering if was possible to plan some sort of crazy world trip around these restaurants. The answer, of course, is yes.

I thought it would be kind of fun to put on my trip planning hat and see what I could come up with for this crazy trip!

I started in Denver and planned the trip for two people because, frankly, it would suck to do this alone. I gave a few days in each location to rest from travel and also enjoy the meal before hopping to the next location. 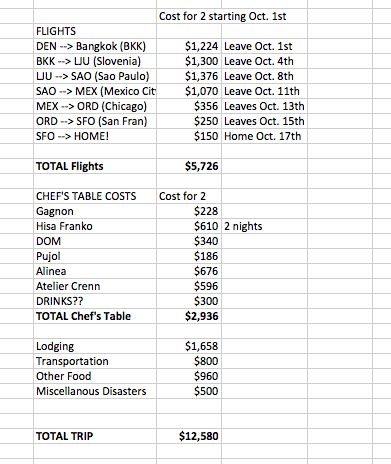 I thought the jaunt to Slovenia would be the most expensive, but actually it wasn’t due to A) a tanking EURO and B) the fact that you can bundle meals and lodging at Hisa Franko.

Here’s the rundown of the restaurants you’d be visiting assuming you wanted to plunk down the cash to make this happen. I listed this in order of restaurants I would be most excited to eat at.

GAGGAN (Bangkok, Thailand) – A mix of traditional Indian food from a world class chef who trained at El Bulli. I would be most excited to eat here I think just because it’s flavors that are so foreign to me.

HISA FRANKO (Slovenia) – This seems like some sort of castle vacation. You get to stay at the house and eat there and drink their delicious (although apparently not expensive) wine. Next time I’m in Slovenia…

PUJOL (Mexico City) – Betsy and I love Mexican food and I would love the upscale take on traditional Mexican food. The tacos that were featured in this episode looked out of this world.

ATELIER CRENN (San Fran) – This looks like such a great French restaurant with California flair. The menu each day is in the form of a poem which is a bit much for my liking generally, but the food looks crazy.

ALINEA (Chicago) – This was kind of last on my list this season if I had to rank the restaurants. I get it. Alinea is perfect, but it’s the most expensive by far and it’s kind of lost on me. I’m not saying I wouldn’t go, but it’s just not at the top of my list.

Why I Love Chef’s Table

While it seems obvious, the show makes the point beautifully that where you come from shapes what kinds of food you want to cook and eat.

Why I Dislike Chef’s Table

I think there’s some element of the show that makes cooking seem inaccessible. 99.9% of the world will never be able to cook like these chefs (or eat at these places) and maybe that makes some people throw their hands up.

I worry that it makes people want to watch cooking more than actually cook.

But, if you practice everyday, you can still get appreciative YUMS from your family, which are just as good. And you save $12,580.

All of that said, if I’m ever in Slovenia, you’ll know where to find me. 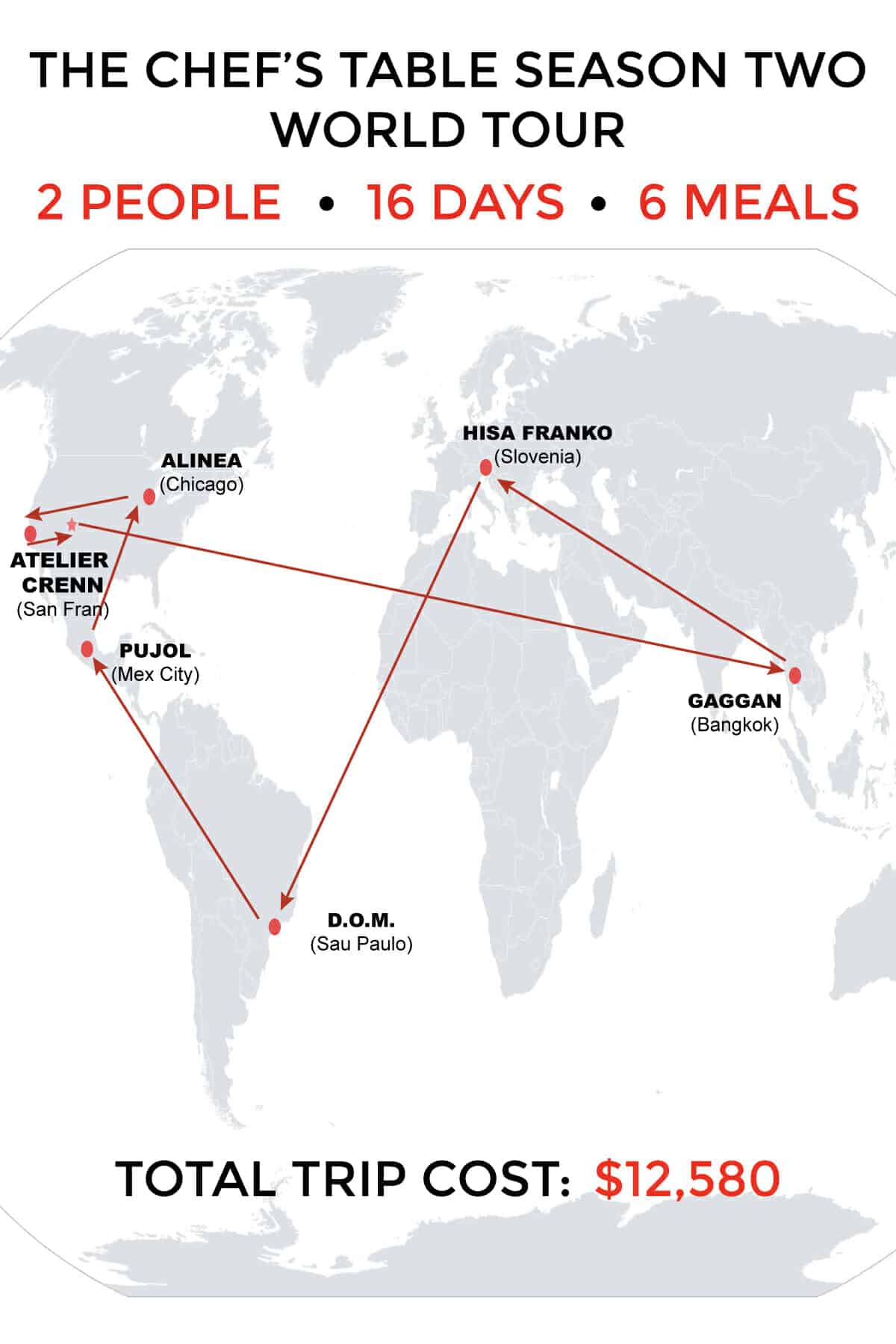 Obviously, if you’ve eaten at any of these places or plan to, leave a comment!

Some of the restaurant pricing from this great Eater review.