Over the years, I’ve written about bacon a lot.  If you want some serious bacon action, just check out the bacon section of the Macheesmo!

I’ve mentioned in passing how I like to cook bacon, but I thought it would be worth it to spend a post walking you through how I make my bacon.

Not only does this method result in what I believe to be the best way to cook bacon, but it lends itself well to a bunch of fun variations on bacon which are also included in this post.

So… vegetarians… look away!

This is the absolute best way to cook bacon, plus three delicious and easy variations to give your bacon some great flavors!

1) Add oven safe wire rack to a sheet pan so it is slightly elevated off the pan. Lay out 8 strips of bacon on the wire rack. It’s okay if the strips overlap slightly. Season with ground pepper.

3) Remove bacon and flip the strips.

4) Bake for another 10 minutes or until very crispy. Let cool briefly before serving.

Chocolate Version:
1) I like the pepper/chocolate combo, but you might want to leave the pepper off if you’re doing a chocolate version. Otherwise, cook bacon as directed above.

2) Meanwhile, in a small microwave safe bowl, add cream or butter and chocolate and microwave in 15 second bursts until the chocolate is melted and smooth.

3) When bacon is cooked and cooled to room temperature, drizzle chocolate over bacon. Cool in the fridge for 10-15 minutes so chocolate hardens.

Maple Version:
1) Cook bacon as directed, but when you flip the bacon halfway through, drizzle maple syrup on each strip of bacon. Return bacon to oven to finish cooking.

Candied Bacon:
1) Cook bacon as directed. Meanwhile, mix together brown sugar and cinnamon in a small bowl. When you take bacon out halfway through to flip it, sprinkle each strip with brown sugar mixture.

The Best Way to Cook Bacon

The title of this post is the BEST way to make bacon, but I probably should’ve added an asterix to that.  There are, of course, dozens of ways to make bacon and some are better than other depending on what you want to do with the bacon.

This is not how you should make bacon if you’re adding it to a sauce (like pasta carbonara) or something like that.

This is how you should make bacon if you want to eat big strips of perfectly crispy, salty bacon that aren’t soaked in grease.  In my mind, that makes for the perfect piece of bacon and this technique delivers every single time.

You really only need two pieces of equipment to pull this off.  First you need some sort of rimmed sheet pan or baking sheet.  Most people probably have that.

The piece of equipment that some people may not have unless you bake regularly is a wire rack.  And not just any rack… it needs to be oven safe.  Like this one. These are cheap and if you make bacon even once a month, it’s worth it to pick one up just for bacon.

Then just set your wire rack on your sheet pan and lay out your bacon in long strips on the wire rack.

I like to season my bacon really well with coarsely ground fresh pepper, but that’s an optional step.

Once you have your bacon laying on the wire rack, just stick the whole thing in a NOT pre-heated 400 degree oven for about 12-15 minutes.  Bacon should start off cooking slowly, so don’t pre-heat your oven for it.

PS. If you’re ever cooking bacon in a skillet or pan, it’s always best to start it off cold.

The reason that this method works so well is because as the bacon cooks, the fat falls away from it and collects on the sheet pan, so the bacon gets very crispy.  Because the wire rack is supporting the bacon, it also stays in beautiful strips.

While you don’t have to flip the bacon, I recommend it after about 12-15 minutes just to make sure your bacon is cooking evenly.

There can be a pretty huge range in bacon thickness.  Obviously, depending on the thickness of your bacon, you might have to adjust the cooking time.  If you’re using very thick, slab bacon, you’ll probably have to add on 5-10 minutes to the total cooking time.

After you flip the bacon, just stick it back in the oven for another 10 minutes or so.

When you pull your bacon out, let it cool briefly and you’ll end up with these beautiful strips.

The best part about this bacon is how absolutely crispy it is.

If you don’t like your bacon crispy, you can still cook it this way… just pull it out a few minutes early.

But for me, crispy is where it’s at.

Now that you have the best way to cook bacon down, there’s three really fun variations that are very easy to do, but taste amazing.

Let’s go through them! 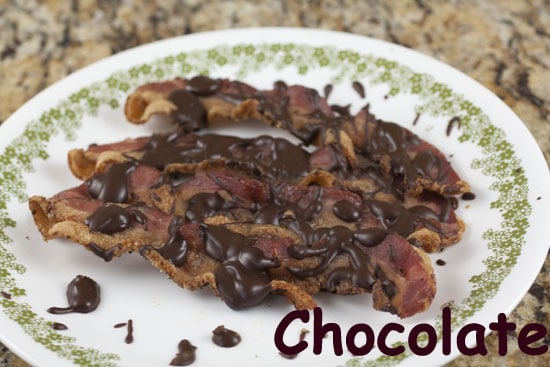 This looks and tastes very decadent, but is super-easy to do.  Basically, cook the bacon as directed above, but leave off the ground pepper.  Actually, I like the pepper-chocolate combo, but it’s not for everyone so maybe just leave it off to be safe.

Then, in a microwave safe bowl, add the cream or butter and chocolate and zap it in 15 second bursts until the chocolate is melted.

Once your bacon is cooked, let it cool down to room temperature and then just drizzle on the chocolate.  You could also completely dip the pieces of bacon in the chocolate if you want!

I like the chocolate to be solid for this recipe so after you drizzle or dip it on, just stick the plate in your fridge for 10-15 minutes and the chocolate will harden. 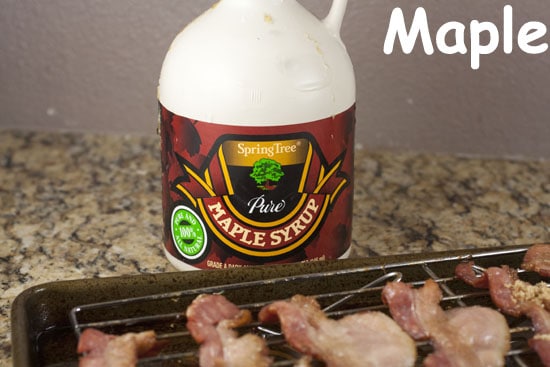 Bacon and maple were made to be together.  Just a few notes on this variation to make sure it goes smoothly for you.

1) Use real maple syrup.  If in doubt, look at the ingredients.  It should only have one:  maple syrup.  If it has corn syrup or high fructose corn syrup, then try again.  The problem with these is that they will cook differently on the bacon and it’ll be very sugary.  Not ideal.

2) Don’t add the maple syrup at the beginning.  It’ll burn by the time the bacon is done.  Instead, half cook the bacon and then when you take the bacon out to flip, add a small drizzle of syrup to each strip.

It doesn’t take much to get the job done.

After baking for 10 more minutes, the syrup will mostly evaporate leaving just a light maple flavor on the bacon. 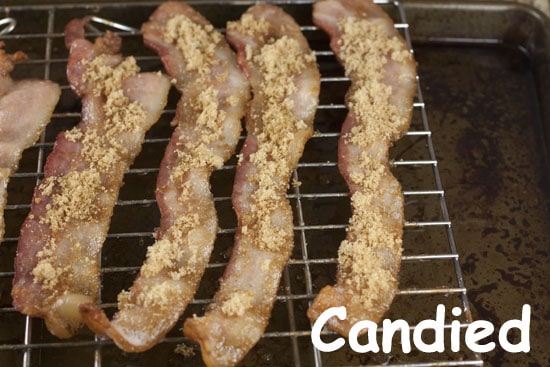 I saved my favorite variation for last.

Basically, you just mix some brown sugar and cinnamon together like so…

After the half-way cooking point for the bacon, sprinkle on a bit of the brown sugar on each strip.

While the bacon finishs cooking, the sugar will melt around it and form this delicious sweet crust.

When the bacon cools, the sugar hardens and makes the bacon even more crispy (which I like) and the salty sweet combo is perfect.

So there you have it.  The definitive best way to cook bacon to make really good crispy bacon with a few fun alternatives!

Give it a shot if you’re in the mood for crispy and delicious bacon.