Over the years, I’ve made a lot of different foods from scratch that you can also easily buy in the stores.

That’s not to say that I make these foods from scratch every time I cook with them, but I’m at least aware that they can be made from scratch.

In almost every case, the homemade versions are cheaper and taste better, but you sacrifice time to get them done.

Sometimes that’s not a trade-off that I want to make.

BUT there are some foods that are just so plain simple to make at home that I find myself making them almost 100% of the time.

Once you get the  hang of making these ten things at home, you’ll wonder how food manufacturers stay in business.

Boxed muffin mix is so freakin’ popular and I just don’t get it.  Basically, they take flour and mix it with baking soda and sugar, re-box it, mark up the price by 400% and sell it to you.  You still have to add liquids and eggs to the mix to make muffins!

Check out the muffin section of Macheesmo for some ideas on making your own mixes.  It really isn’t that hard and you don’t save much time by using the box mixes.

Just like muffin mix, these mixes are basically just re-boxed flour with some leavening agent.  They don’t really save you much time, believe it or not.

If you want a really quick homemade pancake mix, try out these greek yogurt pancakes.  It doesn’t get much easier and they are wonderful.

Notice a trend?  Again, these mixes are mostly flour and you still have to add-in some ingredients.

This is something you can easily do at home with just a few pantry staples and the results will be far superior to the boxed stuff which has tons of strange add-ins. 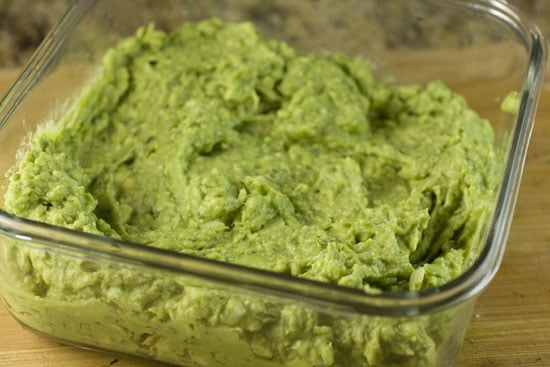 There are a few different kinds of store-bought guacamole – some in jars, some frozen, and some powdered.  None of them are great.  The only time I’d recommend using them is if you have a serious hankering for guacamole and can’t find any ripe avocados.

If you can find ripe avocados, then just mash them with some shallot, lime juice, salt, and maybe a couple of spoonfuls of salsa for a quick and easy at-home guacamole.

In my house, we make and eat a lot of guacamole!

This might not be true for ALL salad dressings, but most of the store-bought versions are just cheap oil and high fructose corn syrup.  So you can almost always do better at home.

Use a leftover mustard jar and mark it off with a Sharpie pen with the levels for your favorite vinaigrette.  Then you can remake the dressing in seconds when needed.

To this day, Betsy and I use this tarragon vinaigrette on a weekly basis.

This one is mainly a money saver.  Learn how to make popcorn on the stove with wholesale kernels and you’ll save a bundle over microwaved popcorn bags.  You can buy a pound of popcorn kernels for under a buck which will make a BUNCH of popcorn.

It takes about the same amount of time to pop it on the stovetop as in the microwave, but you do have to watch it closely so it doesn’t burn.  A small price to pay.

You can also season it to your liking which is my favorite part.  I like to season mine with seasoned salt, black pepper, and some grated parmesan cheese!

Any sort of pre-mixed seasoning rub or packet is almost always mostly salt with a few basic spices in it.  You can save money by experimenting at home with real spices.

For example, my go-to rub for most meats is this all-purpose rub.

Another seasoning that I use a lot is a taco-style seasoning which is chili powder, paprika, cumin, salt, and pepper.

In my opinion, there aren’t a lot of great marinades that’s I’ve seen on store shelves but people seem to love them.

In essence, most of them are cheap oil, salt, some sort of acid/vinegar and a few basic spices.

Again, you can do this at home.  A lot of times I just make it up as I go at home, but I almost always use olive oil, some sort of vinegar (white or red wine vinegar is always good), some fresh garlic, salt and pepper, and spices like paprika, red pepper flakes, etc.

It’s hard to go wrong and you’ll get to use up some stuff in your pantry rather than just buying another bottle.

Jarred pasta sauces are gradually taking over the entire supermarket.  Every time I look down the aisle, there’s another one.  I just don’t get it.

Chop up half of an onion and a few cloves of garlic.  Cook them on medium heat for a few minutes in a few tablespoons of olive oil.  Add a can (28 ounce for a pound of pasta) of diced tomatoes or tomato sauce and simmer it for 5-10 minutes. Season with salt and pepper, maybe some fresh lemon juice, and fresh (or dried) basil.

It will taste fresh and delicious and takes the same amount of time as it takes to actually cook your pasta.

Whether it is beef, turkey, or veggie, I make 99% of the burgers that I cook from scratch.  The pre-formed frozen stuff is just never that great in my opinion.  Sure, they are nice if you are feeding a crowd, but I’ve rarely needed to feed more people than I can quickly make burgers for.

Plus you can always make your own in bulk and freeze them.

What are your DIYs?

My goal with this post isn’t to make you feel guilty if you happen to buy some of the above things.  It’s just to give you the confidence to try them out at home and see how much quality you can gain by doing so.

There are, of course, a world of items that I make occasionally at home but also sometimes buy like breads.

Your list might differ from mine!  What are some of the things that you find yourself always making at home even if you can easily buy them at the store?  Leave a comment!