Now Reading How Not to Make Hash Browns

How Not to Make Hash Browns

I’m going to tell you a story of hope.

It’s a story that I’m sure you’re familiar with. I think everyone has had that one moment when you saw something beautiful in a magazine and you say, “I must have it.”

Well, for me, that was this crazy hash brown skillet situation in the latest Bon Appetit. It looked unreal.  I tried it the day after I got the issue.

As you can see from the above photo, I practically nailed it.

But that’s life right? Things are never as good as they look in the glossies! Truth be told, I think a few things went crucially wrong with my version and I ended up making a pretty decent version on day two (although still not as heavenly as the original looked).

3) Toss grated potatoes with chopped scallion whites, salt and pepper, and add to cast iron pan. Spread out into an even layer. Cook for 6-7 minutes until it is starting to brown around the edges.

4) Carefully loosen the potatoes from the bottom and slide them onto a plate. Then (with confidence) flip them back into the pan.

5) Drizzle hash browns with another tablespoon or two of oil and place in the oven for 25-30 minutes until the potatoes are well-browned.

6) Remove from the oven, garnish with scallion greens and coarse salt, slice into quarters and serve immediately!

I think I started this recipe with one very clear mistake: I thought I would use sweet potatoes instead of Russet potatoes. This was a bad idea and I realized my error almost immediately. Sweet potatoes are just a pain in the ass unless you are frying them. They turn mushy, are hard to get crispy, and two seconds later they are burned.

So I probably shouldn’t have subbed, but I still think the original recipe is going to be pretty hard to replicate.

You see, it starts with THREE POUNDS of potatoes, peeled and grated. Then you cook all of those potatoes in one pan.  You are supposed to intuit when those three pounds (which ends up being about 3/4 inch thick when compressed) is perfectly browned on one side.  Then you are supposed to gently slide those three pounds of potatoes out onto a plate and flip them back into the pan.

I found this to be next to impossible. 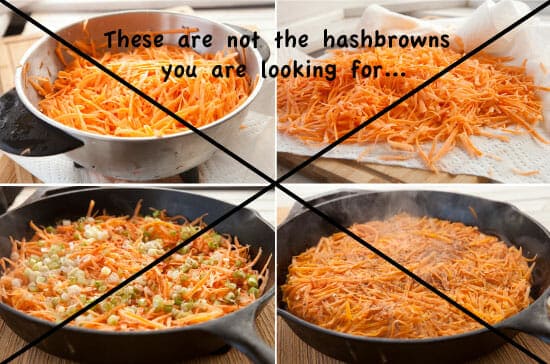 As you can see from the bottom right photo, I was close to getting where I needed to be, but it all went horribly wrong when I had to actually flip these guys. It’s impossible to slide three pounds of potatoes out without messing up their structure. I just couldn’t do it and I’m pretty decent with potatoes!

After much cursing, I decided to regroup on day two and make three changes:

2) Reduce the potatoes by about a third.

3) Finish them in the oven.

So I started fresh the next day and grated up a much smaller batch of potatoes. It basically worked out to one medium Russet potato and one medium sweet potato.

As with the original recipe, I rinsed my potatoes really well under cold water and then dried them very well with some paper towels. Wet potatoes will just steam and not crisp at all.

I also stirred in some salt, pepper, and scallions.

Then I added about two tablespoons of oil to my cast iron skillet and tossed in my potato mixture. I let it cook over medium heat for about 7-8 minutes until I could tell it was starting to crisp on the bottom.

Then I pulled out my pie server. This was just the best device I could use to really get in there and loosen the bottom of the potatoes and make them easier to slide out. If you have a very good spatula, that would work also I’m sure. I just had a flimsy plastic one that wasn’t getting the job done.

I took a deep breath and carefully slid my potatoes out onto a plate.

Then I took a second deep breath and flipped the plate back into the pan.  I drizzled on another tablespoon of oil and stuck the whole pan in the oven for 25-30 minutes at 375 degrees Fahrenheit. I figured this would be the easiest way to have a good even heat around the whole potato and not burn the bottom. It also kept the top nice and crispy.

After 25 minutes, this was my finished situation.

I encourage only two garnishes for this: scallion greens and coarse salt. I used some salt that I bought in Peru!

I chopped mine into quarters and it was ready to go.

This would be a pretty solid side dish,but honestly, I could eat the whole thing by myself…

I posted on this whole deal for a few reasons.

First, I wanted to remind everyone that nobody succeeds in the kitchen every day. Failures happen. They happen a lot actually. It’s part of the deal.

Second, don’t try to cook three pounds of potatoes in one giant freakin’ hash brown unless you have some huge onions.

Third, to be honest, just make these latkes. They are easier to work with and just as tasty… if not more so.