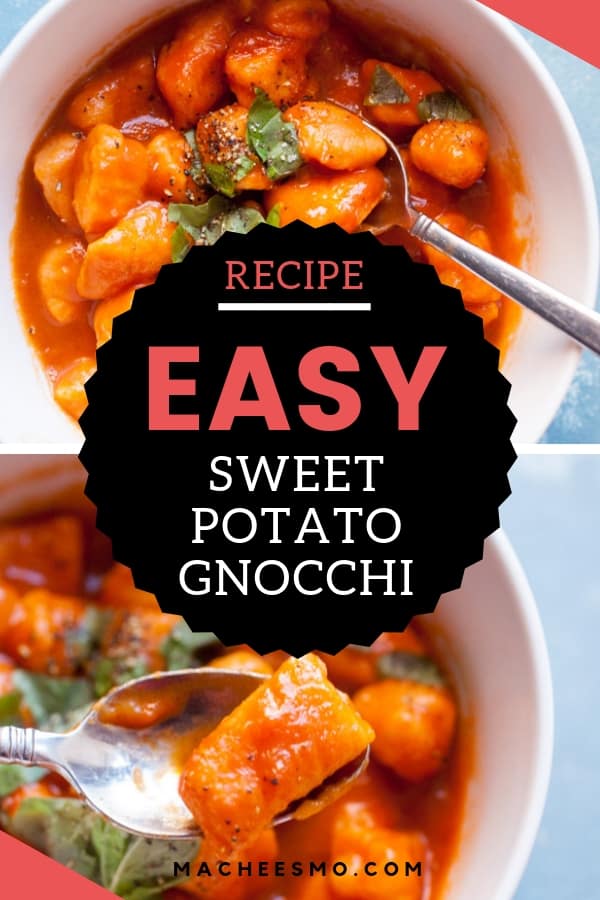 This Easy Sweet Potato Gnocchi was my attempt to make a light carb pasta and it has become one of my favorite overall kinds of pasta because the dough is so easy to work with. Turns out it is also very popular with the kids!

Some weight loss people are crazy about eliminating carbs ever since this guy named Atkins… My goal with this sweet potato pasta was to make something that’s very delicious and has slightly less carbs than a standard pasta.

It must be stated for the record that I originally thought about making an even healthier recipe by trying to make cauliflower gnocchi. When I told Betsy about my idea, she honestly replied, “That sounds disgusting.”

I decided she was right. Plus, I’m not sure that it would have technically worked. So I went with sweet potatoes. They are packed with flavor and are slightly healthier than normal potatoes (sweet potato vs. normal potato).

Since really gnocchi is just the veggie plus a bit of flour and a large egg, it’s actually pretty healthy for you. Where people get in trouble with gnocchi is the sauce so I used a light tomato sauce rather than the truly rich brown butter sauce, although I included both options below!

As you can see there isn’t much to this recipe. It’s really all technique which you should not stress out about unless you work in a restaurant and are intending to sell your little pillows of pasta for actual cash money.

For me though, the goal was to produce something light and very tasty.

Start by peeling your sweet potatoes and cut them into large 2 inch cubes. Also, get a large pot of salted boiling water going (I use about 1 Tablespoon of kosher salt per gallon of water).

Drop these chunks of potatoes straight into the water and let them cook until they are fork tender, about 20 minutes.

While you do need to add some flour to get these gnocchi to hold together, the key to making these gnocchi light is to add as little all purpose flour as possible to the dough. That means that you need to draw out as much water as possible from the cooked potatoes. After cooking, I suggest moving the potatoes to a bowl lined with paper towels which will soak up a lot of water. Let them rest for a few minutes.

Then add your dried potatoes to a large bowl and mash them up with a fork. You don’t need to run them through a potato ricer like normal gnocchi, but you can if you want. The sweet potato flesh will mash much easier than normal potatoes. I tried to spread my potatoes out because they need to cool completely before we continue with the recipe.

Once the sweet potatoes are cool, add an egg and a pinch of salt!

Once your sweet potatoes have cooled to at least room temperature (sticking them in the fridge for 30 minutes would be a good call), add one large egg and mix it well. Then slowly add your flour, 1/4 of a cup at a time, until the dough starts to come together.

Ultimately, you want a very soft dough, but one that is manageable. Something like loose Play-Doh. I ended up adding about 1.5 Cups flour to my dough. Knowing how much flour to add is where experience comes in. If you just follow the recipe you might end up with gnocchi that don’t hold together or are hard as rock.

Just work slowly. Eventually, your dough should look something like my picture.

Some recipes you’ll see online will call for adding other ingredients to the dough like ricotta cheese or fresh herbs. These are fine in small quantities but I found it’s best to keep the dough simple so the texture is soft. You can always add herbs and cheeses to the sauce as well.

A quick note for gluten-free readers: Obviously, adding flour makes these not gluten-free, but you could use a gluten-free flour to finish the gnocchi dough. There really isn’t a need for the gluten to make these work so a gluten-free substitution would work just fine.

To form the sweet potato gnocchi, take about 1/6 of the dough and add it to a well-floured work surface. Turn it around to coat it completely in flour and then start slowly rolling it into a long rope.

Be gentle here people. Try to get it as even a thickness as possible. You’re going for about the thickness of your pinkie finger. Going slowly, I was able to roll mine out to about an 18-inch rope of sweet potato dough. Again, you don’t want to add too much flour to the outside of the dough, but if it’s sticking don’t be afraid to sprinkle more down.

Once you get the rope of gnocchi to the right width, chop it into 1/2 inch sections!

Now. If you are doing a lazy man’s homemade gnocchi (is there such a thing?) you can just cook these as is, but if you want them to have a more traditional feel, you need to add the gnocchi ridges.

Take each little sweet potato gnocchi nugget and roll it gently over the tines of a fork. The dough should be very soft and it won’t take much pressure to leave the impressions of the fork on the gnocchi.

Once you make the ridges, set the gnocchi on a very lightly floured baking sheet while you do the others.

If I had to guess, I would say this recipe makes easily 100-120 gnocchi. Probably more. I never got into a perfect groove with my grooves. I’m very far from an expert at this.

Cooking these guys couldn’t be easier once you have them made. Just add as many as you need to a pot of simmering, water. A rolling boil will destroy your work! When they float, they are done! Remove them with a slotted spoon and move them straight to whatever sauce you have picked for your sweet potato gnocchi.

I was trying to think of a low-calorie sauce to serve with these guys. Normally, I would sauce them with a little browned butter, but I thought maybe a very light marinara would work.

Basically, I just added a large can of tomatoes (28 ounces) and a few Tablespoons of basil to a blender. Add a pinch of salt and pepper and some garlic (optional) if you want and blend it up!

Notice that I left out cheese and any oil at all. I was still worried that the basil and tomato would overpower the sweet potato gnocchi so this should be a very light sauce.

Then add your floating gnocchi right to the skillet!

The results of this Easy Sweet Potato Gnocchi: Awesome.

If you are looking for a richer sauce, this sweet potato gnocchi is absolutely calling out for a quick brown butter sauce. To make this, add 1/2 cup of unsalted butter to a skillet over medium heat. Cook the butter for about 4 minutes until it starts to bubble. You’ll see some brown bits forming on the bottom of the skillet. Turn the heat down to low and add a pinch of fresh sage or basil. I like to add a splash of hot pasta water to keep the butter from burning and emulsify the sauce. Add the gnocchi straight from the pot to the skillet and season with salt and pepper and parmesan cheese.

You can make gnocchi! It’s easier than you might think. Sweet potatoes are easier to work with starchy potatoes and make a beautiful gnocchi. I like it with a simple tomato sauce, but it’s also great with brown butter!

1) Peel sweet potatoes and cut them into large 2 inch cubes.

2) Boil potatoes in a large pot of salted water (use approximately 1 tablespoon of kosher salt per gallon of water) Drop chunks of potatoes straight into the water and let them cook until they are very tender, about 20 minutes.

3) After cooking, move the potatoes to a bowl lined with paper towels (this will soak up a lot of water). Let them rest for a few minutes.

4) Add dried potatoes to a much larger bowl and mush them up with a fork.

5) Let potatoes cool completely by placing them in the fridge for 30 minutes.

6) For sauce, add a large can of tomatoes (28 ounces – you can use the juice and tomatoes if you want it even lighter) and a few Tablespoons of basil to a blender. Add a pinch of salt and pepper and some garlic and blend it up. This is your sauce.

7) Add one egg to the potatoes and mix well.

8) Slowly add flour, 1/4 of a cup at a time, until the dough starts to come together (approximately 1.5 cups of flour total).

9) To form the gnocchi, take about 1/6 of the dough and add it to a well-floured surface. Turn it around to coat it completely in flour and then start slowly rolling it into a long snake.

10) Once you get the rope of gnocchi to the right width (about the width of your thumb), chop it into 1/2 inch sections.

11) Take each little gnocchi nugget and roll it gently over the tines of a fork to make gnocchi ridges. Place gnocchi on a lightly floured baking sheet.

12) Add gnocchi to a pot of simmering, water. When they float, they are done!

13) Serve with light tomato sauce or, if you can spare the calories, browned butter is the only way to go. Just toss the gnocchi into the browned butter when they float.

Here are a few other great sweet potato recipes!