Steak Hoagie with Peppers and Onions 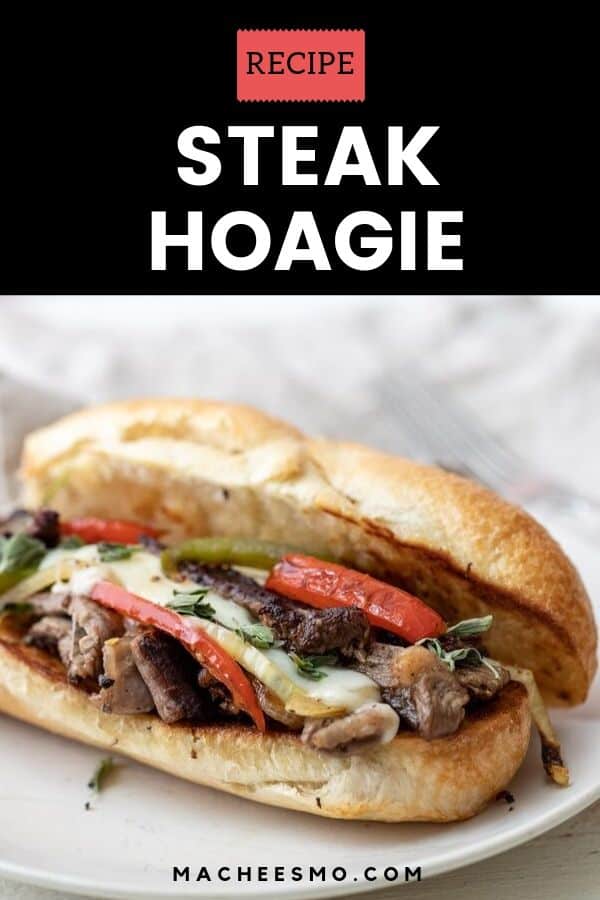 Sometimes I completely crave a good hoagie sandwich and earlier in the week I worked on this Steak Hoagie with Peppers and Onions. Some might call this a cheesesteak, and that’s fine, but whatever you call it, it’s worth making at home!

If you order a steak hoagie from a food cart or similar place, they will cook the steak on a large griddle. This is kind of hard to replicate at home so I like to cook the onions and peppers separate from the steak and then combine them together at the end for a final quick cook to melt the cheese!

The finished mix should be served on a toasted bun. These hoagie rolls are a messy, flavorful sandwich that should not be reserved just for take-out. Making it at home is totally doable!

What Steak for Steak Hoagie

There’s no hard and fast rule here for what kind of steak to use. You don’t want something super fatty or super lean. I think sirloin is great middle-of-the-road steak that slices easily and has just enough marbling to work in a sandwich.

You could use New York strip or ribeye steak if you wanted. I’ve never tried it with flank steak, but I think it would be okay if you sliced it thin enough. Skirt steak would be too fatty I think for this sandwich.

Whatever you end up using, slice it as thin as you can. It helps to make sure it’s super cold before slicing!

Trim off any huge pieces of fat, but some fat is welcome. You will need 5-6 ounces of steak for each hoagie.

How is a steak hoagie different from a Traditional Philly Cheesesteak?

These types are sandwiches are similar and sometimes I think people get too caught up in branding. In my mind though, a Philly Cheesesteak is a type of steak hoagie that is very regional and includes a specific kind of steak. I made a very classic at-home version of the Philly Cheesesteak for Simply Recipes!

Steak hoagies can be a more flexible and larger group of sandwiches. The hoagies can use different kinds of steak and include onions, peppers, mushrooms, and do not have to have cheese on them.

To uncomplicate things, I like to cook my steak separate from my peppers and onions. You can easily combine them at the end to finish off the sandwich.

I cook my vegetables and my steak in a little butter and season everything with salt and pepper as it cooks. The veggies will need to cook over medium-high heat for 5-6 minutes. They should be soft, but not caramelized. It’s okay if the bell peppers have a little crunch to them still.

When the veggies are cooked, scoop them out of the pan, add some new butter, and cook the steak in a single layer. A large skillet or griddle works best for this. Try not to mess with it too much so it gets a crust on one side.

The steak will need about five minutes to cook through. Now you are ready to make a steak hoagie!

When you are ready to make a hoagie, slice a bun in half and butter it. Place that in a skillet next to a big pile of steak and veggies. You can use the same skillet as before, but wipe it out.

After a minute or two, the bun should be nicely toasted and you can add a slice of cheese to the steak if you’re using it. Cover the skillet for a minute to let the cheese melt. When it comes to cheese, I really like provolone cheese on a hoagie like this, but mozzarella is a good choice also.

Slide your filling into your hoagie bun and eat your steak hoagie immediately. It’s messy, meaty, and one of the best homemade sandwiches you can make!

What to serve with these hoagie sandwiches

These steak hoagies are absolutely a meal by themselves, but if you wanted to serve something alongside them, I would keep it light! I would serve it with a hearty salad like my Ultimate Fall Salad or a flavorful side like this Roasted Cauliflower recipe. I would also love this steak hoagie served alongside these Chili Broccoli Steaks!

Can you make these hoagies in advance?

In short, sort of. I have no problem cooking the peppers and onions in advance, but I do think the steak is best if you cook it right away and then add it to your hoagie. So some shortcuts are okay, but this sandwich is really best right off the griddle.

That said, if you have leftover filling, absolutely save it. Reheat it in a skillet with a little butter or drizzle of olive oil and add it to a toasted bun. It’ll be very good, but not quite as good as on day one.

After a minute or two, the bun should be nicely toasted and you can add a slice of cheese to the steak if you’re using it. Cover the skillet for a minute to let the cheese melt. In business!

Slide your filling into your hoagie bun and eat your steak hoagie immediately. It’s messy, meaty, and one of the best homemade sandwiches you can make!

My Steak Hoagie Recipe with Peppers and Onions

The steak hoagie! Some might call it a cheesesteak but cheese isn’t completely mandatory for a good sandwich. Sauteed peppers, sliced and seared steak, and a butter toasted bun.

Here are a few other great Sandwiches!