I’m about to toss out a trick that caterers across the world don’t want you to know.

You can make stuff look classy by putting it in a baked cup.

It’s true that stuff is a lot easier to eat when it’s in an edible cup, but I’ve never really understood why restaurants and catering companies think they can charge MORE just because they are putting something in a silly baked cup.

Turns out that it’s dumb simple to make and fill baked cups with delicious things.

1) Lightly oil a muffin tin and stuff a wonton wrapper into each cup.  Shape the wrapper up against the edges of the cups.

3) For filling, blanch spinach in salted boiling water for 30 seconds.  Then remove and let cool on a few paper towels.  Use paper towels to press out as much liquid as possible.

4) Drain artichokes and roughly chop them.  Once chopped, also press them with a few paper towels to remove extra liquid.

5) Mix spinach and artichokes with other filling ingredients.

The thing to remember about this filling is that it’s a filling and not a dip.  So I cut way down on the creamy stuff.  You basically just want enough mayo and sour cream to keep the filling together.

When it comes to prepping the spinach, just toss it in some salted boiling water and let it cook for about 30 seconds.  Then pull it out and let it cool briefly on some paper towels.

Once the spinach is cool enough to work with, press it with the paper towels to remove as much liquid as possible.  Then just chop it up!

Important Step:  After you dice up the artichoke hearts, again press them with a few paper towels like you did with the spinach.  The artichokes retain a lot of water and if you don’t press out most of it, your filling will be super-watery.

Once your spinach and artichoke are pressed, you can mix them all together!

There’s a lot of great flavors in this filling, but the two that really pop in my mind are the lemon zest and the garlic.

I used a microplane to zest my lemon and very finely grate my clove of garlic.

Remember when you’re zesting citrus that you just want the outside layer of rind.  If you get into the white part, it becomes very bitter.

Just grab a bowl and mix the spinach and artichoke with all the other filling ingredients.

It’ll probably need a good pinch of salt, but should be pretty much ready to go!

All you need is some wonton wrappers, a muffin tin, and a bit of vegetable oil.

Lightly oil each muffin tin with a bit of oil.

Then kind of just form a wonton wrapper into the tin.  Don’t worry too much about making them pretty or uniform.  All of the little folds end up getting really crispy and are fantastic.

Bake these guys at 350 degrees for about 12 minutes.  You could go a bit longer if you like your more crispy.  I baked mine for 15 minutes for a really crispy final product.

The cups should pop right out of the tin without any problem and once they are cool enough to handle, you can fill them up!  I recommend about a tablespoon and a half per cup.

If you have any leftovers they both keep fine, but just store them separately.  If you fill the cups and store them, then the filling will make the cups kind of soggy.

This is a really delicious appetizer that really takes only a few minutes to make.

Whether you want to start a catering company or just impress the friends and family, this is a winner. 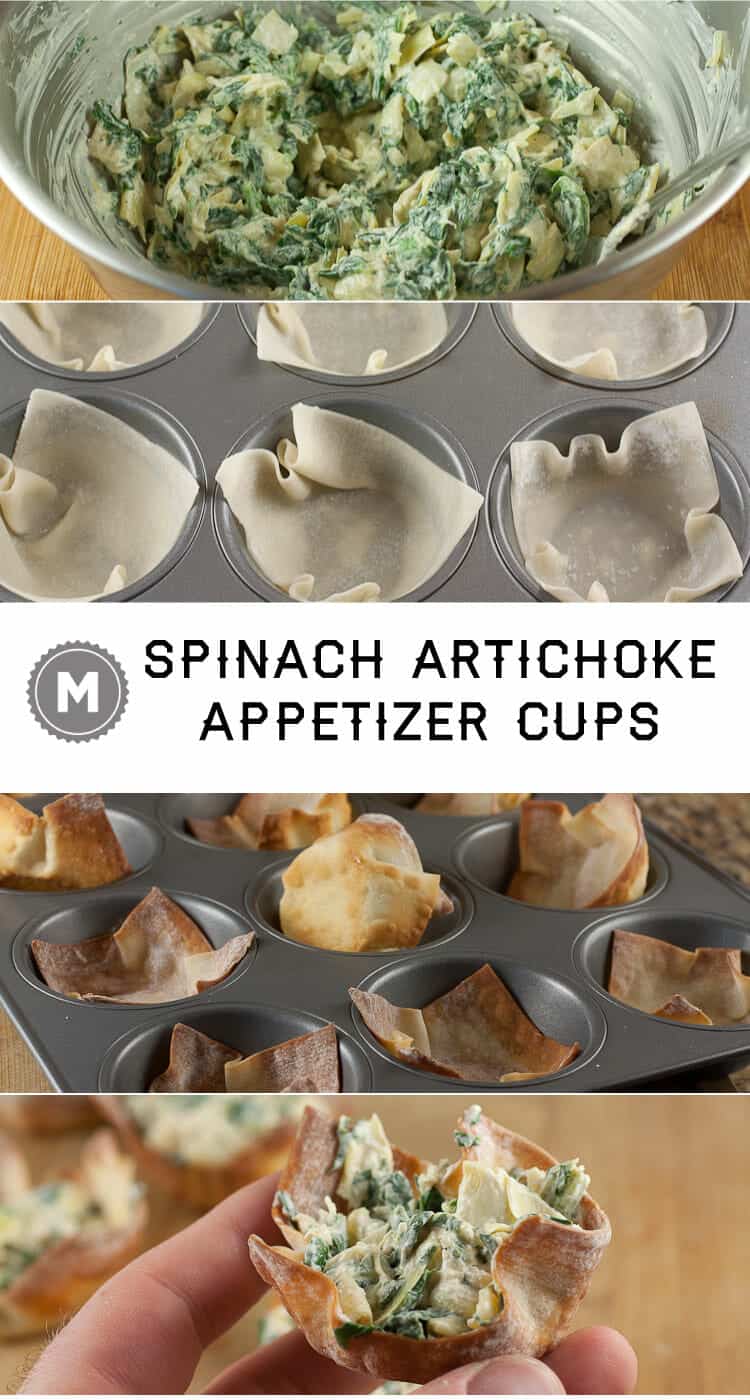