I was originally writing this post as a Guess the Food post, but it was just so obvious that both of these things were soups that I decided to just write a more general post about canned soups.

Canned soups are interesting because I think a huge number of people consider them healthy. I know I used to think so. In fact, I thought they were pretty healthy until I recently started looking at the nutritional facts and ingredients on the cans.

I think this might be because most soup that you would make at home is pretty darn healthy. With the exception of cream soups, it usually just some broth and veggies and maybe some meat.

This perception leaves the door wide open for marketers. They can play off of that traditional feeling. They want you to believe that somewhere out there is an old Italian grandmother simmering a big pot of broth that eventually ends up in your canned soup. Quite frankly, that’s a big load of BS.

So I grabbed two cans of very popular canned soup, and I want to spend some time analyzing each of them. I’ll break the post into three parts: Nutritional Facts, Ingredients, and Branding. I’m not even going to say what each soup is (although you can probably figure it out). The goal is that the next time you are shopping for some canned soup, you spend a second to compare your options and find one that actually meets your standards. 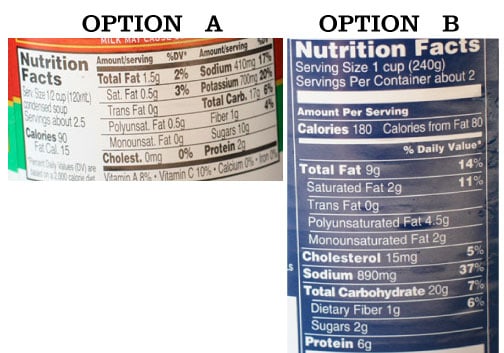 It’s a condensed soup which is fine. The serving sizes are kind of ridiculous on canned soup. I have no problem at all housing a whole can of this stuff. There are two things that smack me across the face when I look at this:

1) Salt. If you ate this whole can of soup, you’d be getting 1,025 mg of sodium, a little under half of all the sodium you should be getting for the whole day. Plus, if you’re like me, you’re eating this with crackers.

2) Sugar.This can has 25 grams of sugar in it. I don’t really ever put sugar in soup. So this is weird to me. This is the same sugar content as a pack of peanut M&Ms.

Ok. So even though it’s low calorie, it’s maybe not the best calories you can get. Let’s check out option B.

Again, there are two things that stand out.

1) Salt! The exclamation point is justified. I was complaining about the last soup. Eat this whole can of soup (it’s hard not to) and you’ll get 74% of your daily salt needs. No wonder people are eating too much salt these days.

2) Fat. There’s very little sugar in this soup, but it’s replaced with fat. You’ll get 18 grams of fat in this can of soup (28% of your recommended daily amount).

If I had to give my completely non-dietitian analysis of these two soups, I would say that you could probably do a lot better.

The Ingredients. Let’s see if we can shed some light on what’s going on in these soups by looking at the ingredients. 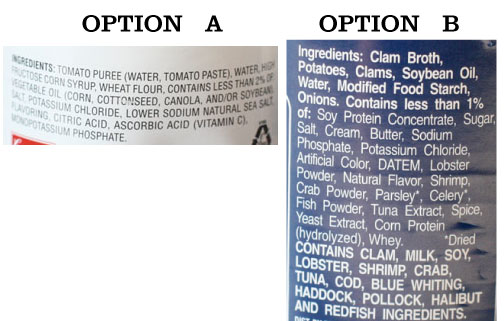 I’m not going to go over all of the ingredients here, but a few things are very obvious:

1) Tomatoes. The first ingredient is a tomato puree so we know it’s a tomato soup. Heck. You can probably even guess the brand at this point.

2) HFCS. High Fructose Corn Syrup is the third ingredient. There’s where all that sugar comes from!

In summary, option A looks to be about as processed as food can get.

Well, there’s a lot more ingredients in option 2 that’s for sure. I’m not going to go through all of them, but here’s some interesting things I noticed:

1) Modified Food Starch. I was expecting to see cream and butter high on the list here, but instead I saw this. Turns out it’s a fat substitute in food and also used to thicken a mixture. It’s a lot cheaper than butter and cream I’m guessing and as far as I can tell is very nutritionally void. Personally, I’d be fine with a little more fat and real food ingredients.

2) Little Cream/Butter. Some people may find this odd, but I wanted MORE cream and butter in this soup. There’s less than 1% in this soup. It’s a creamy soup! Cream and butter are expensive though so manufacturers come up with ways to save money by substituting thickeners and stuff to fake you out.

3) DATEM. Haven’t really seen this ingredient on a food label, but it’s an abbreviation for a common food additive which gives the food the consistency of salsa con queso. So, this is a thick soup, even though there is very little cream or butter in it.

The Branding. Here’s where this gets fun. Both of these soups have some pretty interesting marketing statements on their labels. Let’s go over them.

1) 0 Grams Trans Fat per serving.Well that’s good! It’s soup! Why would it ever have trans fat in it? That’s like saving 0 Grams of Arsenic per serving!

3) M’m! M’m! Good!® with lower sodium natural sea salt. This one literally made me smack the desk. Review the ingredients. There is normal salt in the soup also (and more of it). They added a tiny amount of sea salt just so they could print this. That’s slimy.

Option B:
1) No MSG Added* – The Asterisk is important because there is naturally occurring MSG in the soup because it has yeast extract and hydrolyzed corn protein. So what they mean is that there’s no MSG added besides the things we added that have MSG in them. (I actually don’t have a huge aversion to MSG. Just pointing out how false this is.)

2) Gluten Free – Ok. I guess this is important if you have a gluten alergy.

3) No Artificial Flavors – Again… kind of meaningless, but it sounds good at first glance. The soup has plenty of artificial thickeners, colors, and other things. Just no artificial flavors. So I guess that’s worth a bullet point.

Where does this leave us? Well, it leaves me pissed off frankly.

And it should leave you wanting to read every label before you buy stuff.