This post is sponsored by Old El Paso. Be sure to check out their full line of delicious Tex-Mex products including the NEW Crispy Flour Taco Shells I used for this recipe!

Tacos are my absolute go-to weekday recipe because they are the perfect way to get dinner ready in a hurry and make something truly delicious. These Shrimp Sheet Pan Crispy Tacos are my new favorite seafood taco. The shrimp, tossed in a light mixture of breadcrumbs and taco seasonings, actually crisp up a bit and go perfectly with a mix of fajita veggies.

Most importantly, everything is roasted on one sheet pan for a super easy clean up! If you wanted to trim some time off this recipe prep, just prepare all the veggies in advance so you can move them right into the oven as you prep your shrimp, which get added later.

The tacos probably aren’t quite a 30 minute recipe, but very close if you plan correctly and are worth the few extra minutes in good flavors.

Top the shrimp tacos with your favorite taco toppings and dig in!

These tacos start with everything on one sheet pan: shrimp, peppers, onions, and corn! Then they get stuffed in crispy taco shells and topped with loads of Tex-Mex toppings! Hard to beat and quick to make!

2) Meanwhile, peel shrimp but keep tails on. Dry the shrimp with a few paper towels and toss with breadcrumbs and taco seasoning.

3) After veggies have roasted, drain off any extra liquid and spread shrimp over the sheetpan between the veggies. Try to keep everything in a single layer, but it’s okay if there is some overlap. Bake again for 10 minutes.

I used these new crispy flour shells from Old El Paso for these tacos. I love the texture on them! The shells are slightly thicker and have a slightly airy texture to them that the corn shells don’t have. A fun change!

I piled some fajita veg on a sheet pan with corn, olive oil, and taco seasoning. These veggies will need to roast for 20 minutes or so before you add the shrimp.

Meanwhile, you can prep the shrimpies! I just shell mine (I used large ones but not the extra large which would be a bit big for a taco), and then toss them with some breadcrumbs and taco seasoning. The breadcrumbs give them a slightly crispy texture which is great in a taco!

When your veggies are done roasting, drain off any water that’s on the sheet pan as that will stop your shrimp from getting crispy!

Spread the shrimp out on the sheet pan and back in the oven!

Ten more minutes roasting and you’ll be in business. The shrimp should be done at this point and the veggies should have a nice char on them in spots.

Time to build these bad boys! I like to layer in some slices of avocado, then the fajita veg, a few shrimp (remove tails), and then sour cream, crumbled cheese, and cilantro.

Doesn’t get much better than this for a taco night! 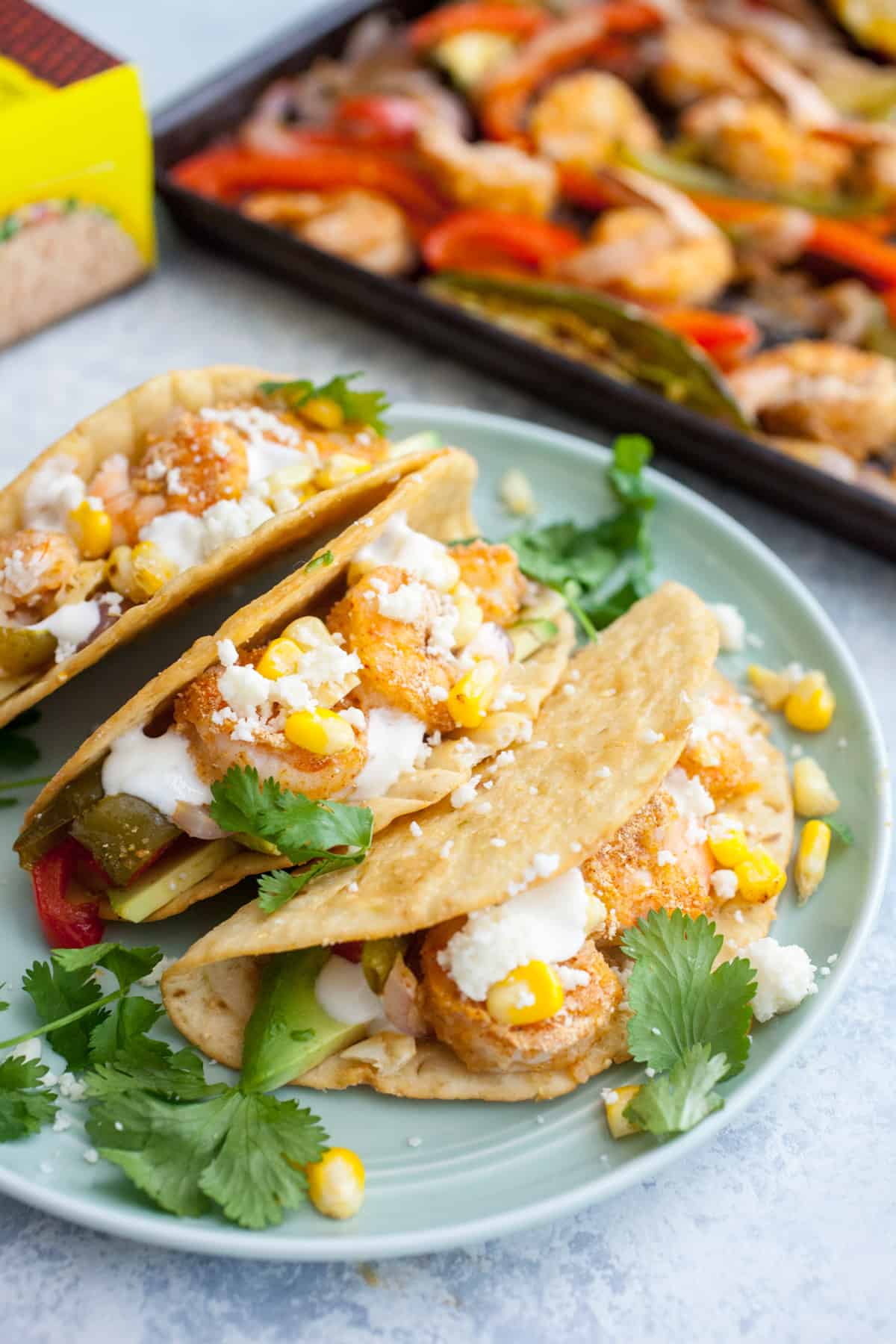 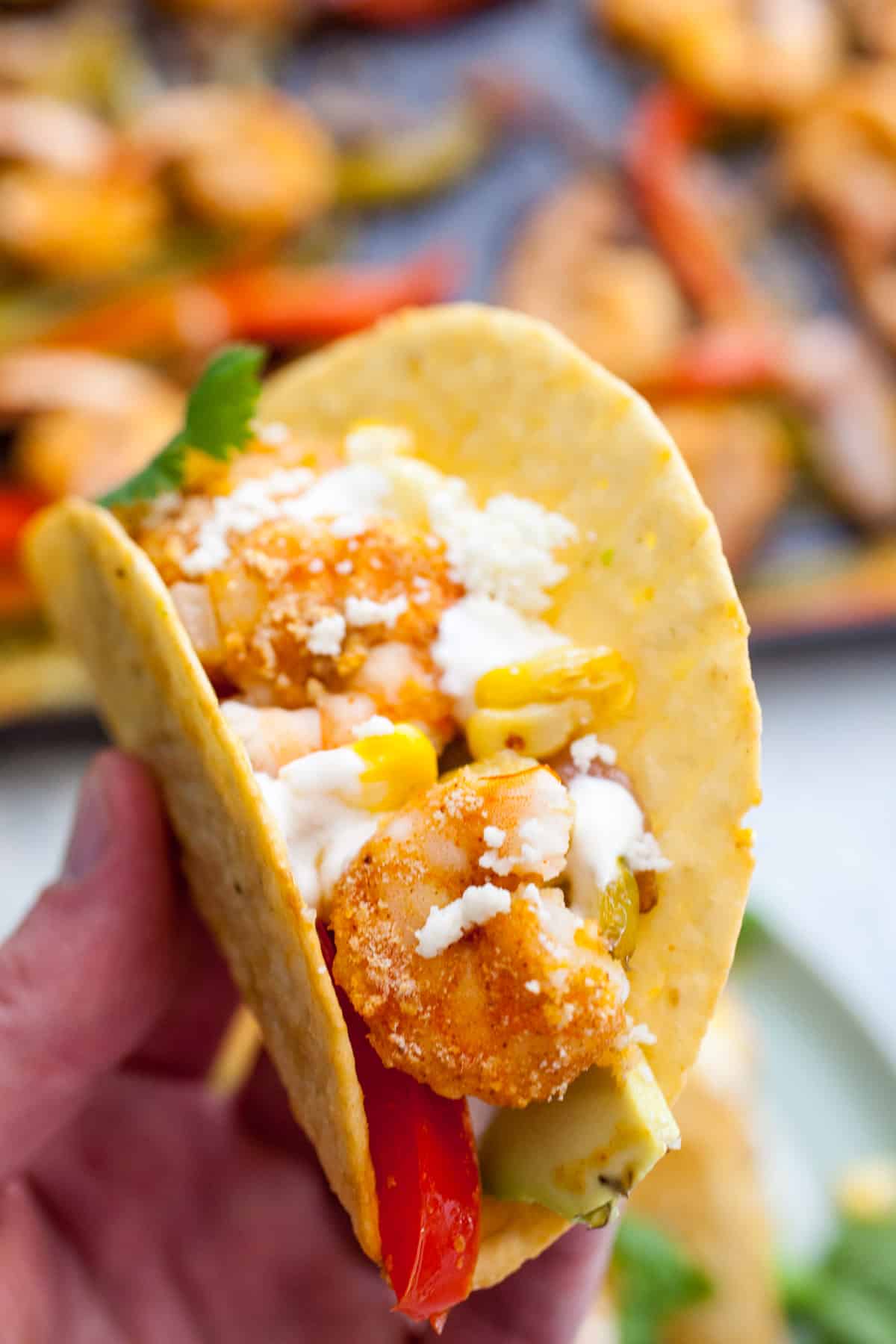 Here are a few other great shrimp recipes!