I’ve been a Bon Appetit subscriber for close to 10 years. I love getting their writing, beautiful photos, and just general deliciousness every month.

I must say though, the last two months have featured some things that are so high brow they are bordering on comical. Their cookie issue featured insanely ornate cookies decorated with freeze-dried flowers. Pretty? Sure. But I would guess probably (literally) one in a million people tried them.

Then I open the most recent issue to find recipes featuring stuff like actual bee pollen.

Aren’t bees, like, dying? How am I supposed to get their pollen and enough of it to make something?

I guess what I’m trying to say is that it seemed over-thought.

But, the most recent issue (the bee pollen issue) also featured a lovely reminder of toast. What you can do with it and what you can put on it. Some of their toasts had caviar, of course, but the one that caught my eye was simple. Greens, mushrooms, some dairy.

This is my twist on it.

Save the bee pollen for the bees and restauranteurs. Eat mushrooms on toast!

Sauteed chard and mushrooms on toast with a thick smear of yogurt dressing and crunchy pomegranate seeds. This is the toast you’re looking for.

1) Slice mushrooms and rinse chard well. Cut the big ribs out of the chard and roughly chop. Add mushrooms to a skillet over medium heat with oil. Cook for 5-6 minutes until mushrooms soften. Season with salt and pepper.

2) Add washed and chopped chard to the skillet and stir to combine. Season with a pinch of red pepper flakes and once chard has wilted, turn heat down to low.

3) Toast bread and smear with a heavy spread of labneh or Greek yogurt.

4) Top toasts with mushroom and chard mixture and sprinkle with pomegranate seeds. Serve while warm.

One toast is a nice side dish or two makes a hearty breakfast.

Sturdy veggies can turn the slice of toast into a full meal. I went with some cremini mushrooms and Swiss chard but you could use any sturdy green really. I would stay away from something like spinach though as I think it would wilt down too much.

A good piece of bread is important if you want a good piece of toast. I used sliced pumpernickel which I knew would have enough heft and flavor to stack up to the big flavors I was putting on it.

An important trick if you are topping your toast is to be sure to smear on some sort of dairy before topping it. It actually acts like insulation and protects the toast from getting soggy.

Cooking the Mushrooms and Chard

I kept this simple and just sauteed the mushrooms in a little olive oil and seasoned them with salt and pepper once they started to wilt down. This took about five minutes and then I added in the chopped chard near the end.

Once the chard was wilted, turn the heat down to low so they stay warm but you don’t want to overcook the veggies.

At this point you probably get it. Toast up your toast and smear it with the labneh.

If you can’t find labneh (it’s just a thickened yogurt sauce), then you can just use Greek yogurt. Labneh is just a bit thicker… almost like a cream cheese yogurt.

Once your toasts are smeared divide up your mushroom topping and season everything with salt, pepper, and red pepper flakes.

Pomegranate seeds are my version of fancy, I guess. They add some great crunch and sweetness. Not totally necessary, but a nice touch this time of year.

While all the ingredients for this toast only costs a few bucks, I think they look pretty fancy actually! 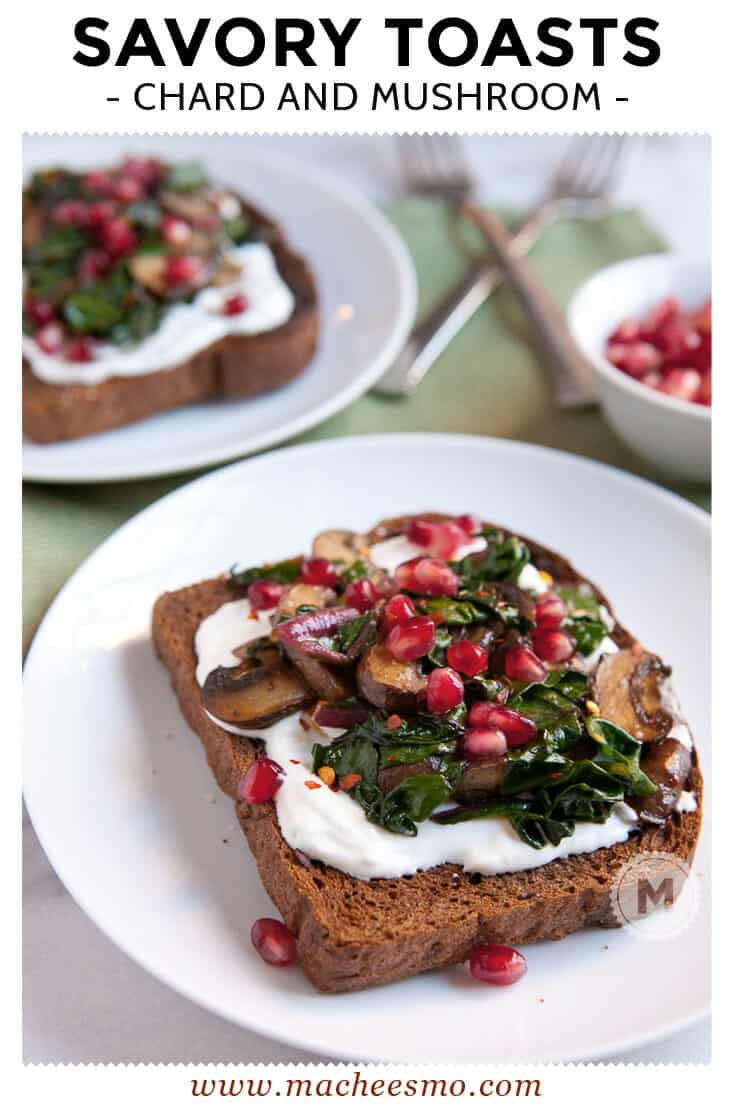