I know! Gross right?! I think making semi-disgusting cocktails is pretty great on Halloween. This Rotten Apple Martini is kind of a mix between a classic apple martini (although it has seasonal apple cider in it as well) and a brain hemorrhage shot which has baileys in it that kind of congeals into a weird mess in the drink.

If you layer the stuff right it looks pretty cool in my opinion and actually tastes great. The combo of baileys creme and apple go great together and almost have a caramel-like flavor to it.

The one kind of weird ingredient I used in this version is Creme Yvette which isn’t a super common liquor, but is good in lots of drinks. It’s a berry based liquor and has a deep red color. It’s great to add a splash of it to mimosas as well!

Who doesn’t love a fun cocktail right? And if you are partying hard, you can make these in shot form. Just divide the base mixture between shot glasses and then add the grenadine and baileys individually to each glass. Don’t mix it once  you add the Bailey’s or it’ll just turn into a cloudy mess.

Say hello to the Rotten Apple Martini! Spooky right?! Turns out it tastes pretty darn good even though it looks GROSS.

NOTE: You can make shots with this recipe as well. The full recipe will make 2-3 shots.

The base for this is similar to a classic apple martini but I like to add some apple cider as well to round out the drink.

Shake that mixture well with ice to chill it out and then strain it into your glass. A classic martini glass works well here.

Then drizzle in the grenadine or creme yvette. Use the back of a spoon to layer the liquid in. It should sink to the bottom and make a cool layer.

Right before serving, add a small splash of Baileys which will kind of coagulate in the cocktail. GROSS, but tastes good. 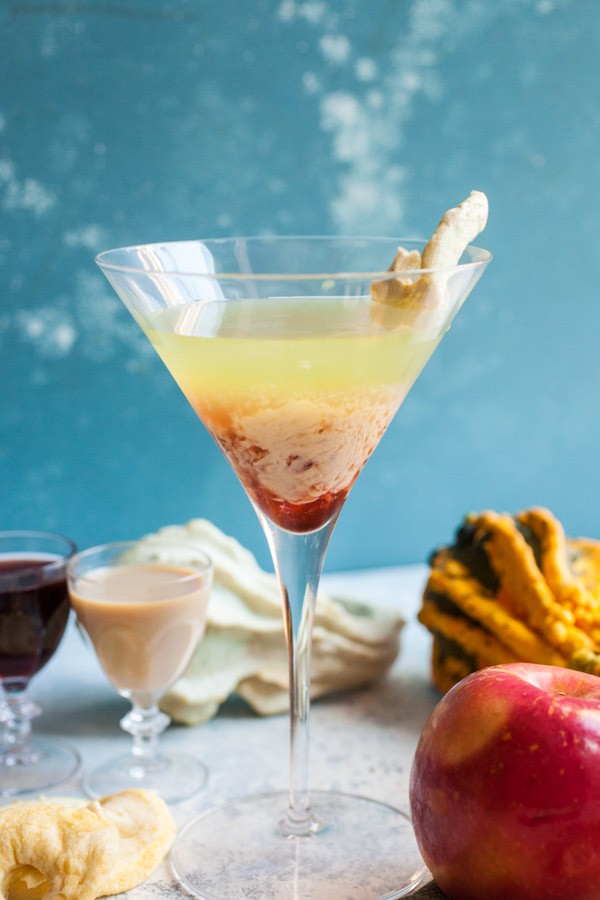 1 Response to “The Rotten Apple Martini” Leave a comment