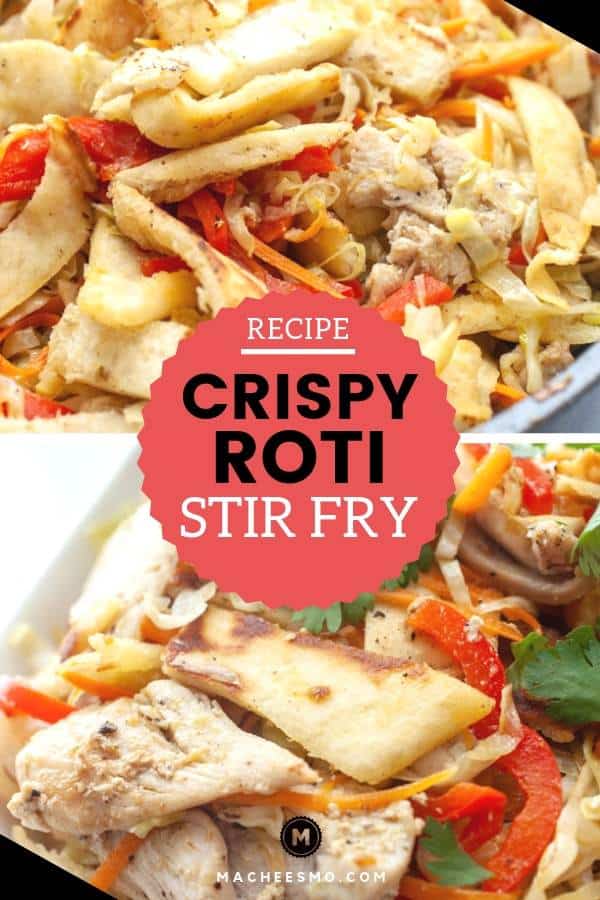 One of my favorite things to watch on the Internet right now is the Bon Appetit “From the Test Kitchen” episodes on their Facebook page. I’ve always loved Priya Krishna’s videos on this channel – like this Roti Pizza. Priya just came out with a new cookbook, Indianish, and I was lucky enough to get sent a copy! I made this delicious Roti Stir Fry from her book (with some humble Macheesmo additions).

This recipe is such a refreshing change on the classic saucy stir fry. It actually has no sauce at all. Instead it has a pile of stir-fried veggies, seasoned chicken (my addition), and crispy strips of roti bread. You can also use tortillas in a pinch.

My family absolutely loved this recipe. Even my kiddos, who are generally weary of stir-fry dishes, were happy to pick out the things they like and loved the chicken and crispy strips. It was a total win!

Check out the recipe below and be sure to enter the Giveaway for Indianish at the end of the post!

Stir Fry! This one is packed with seasoned chicken, loads of veggies, and the secret ingredient: thin strips of roti bread which get crispy in the skillet.

How to Make Roti Stir Fry

Along with my copy of Indianish I also got sent a nice spice pack of some common Indian spices. My favorite was this Chaat Masala. I used it liberally in my version of this stir fry but if you can’t find it, you can leave it out. It’s not in Priya’s original recipe.

I started my stir fry with some thinly sliced chicken seasoned with salt, pepper, and chaat masala. I cooked this entire thing in one skillet in stages. Chicken was first!

While the chicken cooked, I prepared all the veggies. The cabbage was my favorite in this spread and when I made this for my family I left out the spicy peppers, but would’ve included them if I had my wish!

When the chicken is cooked, remove it, add a fresh drizzle of oil, and wilt down all the veggies. Looking good!

I veered a bit from Priya’s recipe for the addition of the bread. She says to just toss it all in but I wanted to make sure that the strips got really crispy so I fried them for a few minutes by themselves.

Then I added my chicken and veggies back in and seasoned the whole stir fry with salt, pepper, and a little more Chaat Masala.

Garnish the finished stir fry with cilantro and chopped peanuts!

I usually think of stir fries as having a sauce, but this was a refreshing twist and I definitely didn’t miss a sauce for it.

I found this stir fry was best right away. I had some leftovers on day two and the bread wasn’t crispy anymore so it kind of lost some of its texture. Not terrible, but not as good as straight out of the skillet! 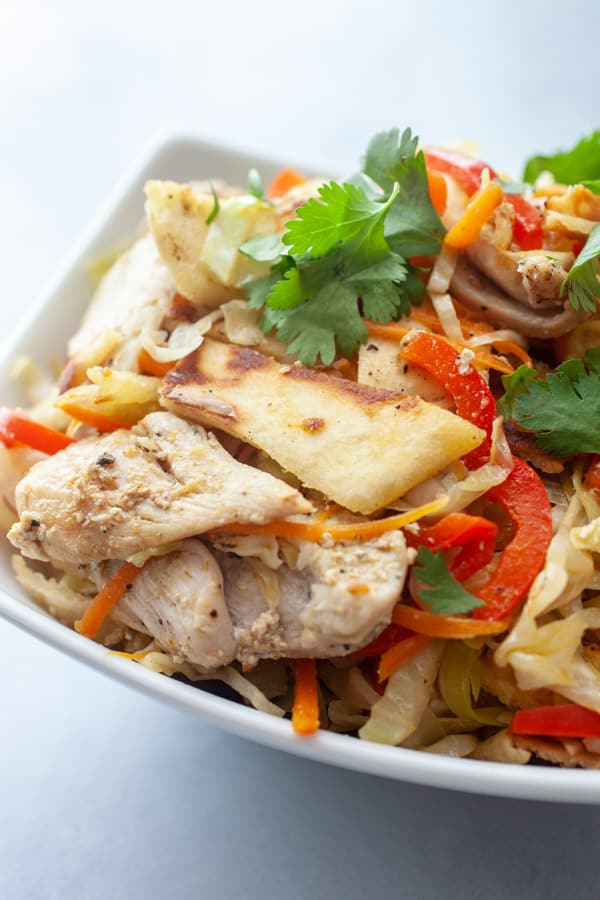 I’m giving away two copies of Indianish! As someone who knows very little about Indian culture, I thought this was a really fun read and a great entry book into a cuisines that can be a bit intimidating. Plus Priya is a funny and wonderful writer!

To enter, use the widget below or just leave a comment below if you like Indian food! I’ll pick winners in one week and mail you a copy! U.S. shipping addresses only are eligible.

10 Responses to “Roti Stir Fry with Chicken” Leave a comment