As someone who has written roughly 2,000 actual recipes in my writing “career”(?!), I know a dirty secret: Good chefs and home cooks don’t follow recipes.

They might read recipes and get inspired by recipes, but very few will sit down and actually follow a recipe step-by-step.

After you start cooking more, you’ll notice that you discount certain steps in recipes and some steps you’ll just ignore completely for various reasons.

I actually think a lot of frustration in cooking comes from thinking you have to follow a recipe step-by-step only to have it fail in your face!

So, in an effort to remove some of the stress, I thought it would be fun to break down the recipe steps that I almost NEVER follow! 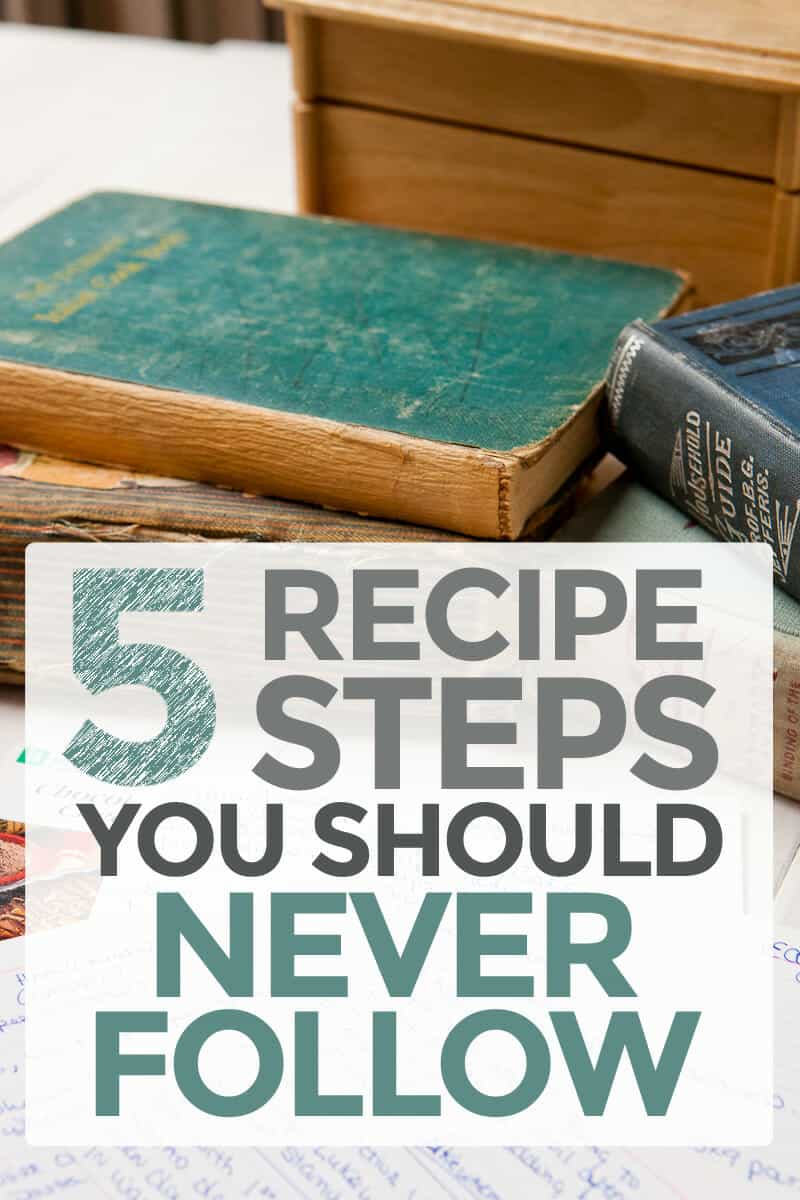 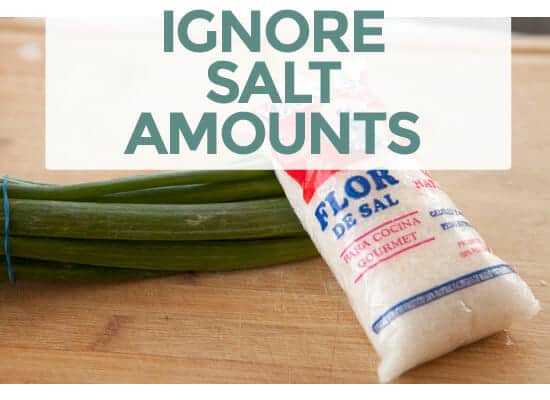 I pretty much ignore salt amounts in non-baking recipes. Even in baked goods, I’ll double check that the recipe is written for the salt I’m using.

But, for non-baking recipes, I always know that I’m going to salt the dish and adjust it to my liking. If a recipe calls for 1 teaspoon salt, I’ll start with 1/2 teaspoon salt and frequently season it up to 1 1/2 teaspoons of salt.

There’s no right answer for salt levels which is why it’s tough to write an amount in a recipe. Learn to taste as you cook and season it to your liking. Then you can just ignore salt amounts! 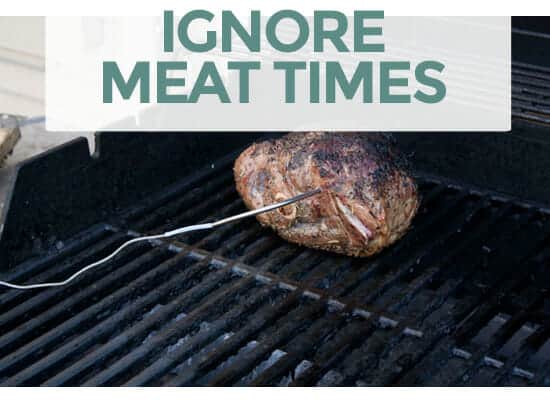 If you’re cooking something like a whole chicken or a pork loin, the cooking time can vary by 10-15 minutes easily. If you blindly follow a recipe’s cooking time it’s very likely you’ll end up with an undercooked or overcooked piece of meat.

At the end of the day, unless you are cooking the same piece of meat on the same stove every single day, there’s really no way you’ll know when the thing is cooked correctly without testing the temp.

Buy a decent digital thermometer, use it often, and ignore cooking times in recipes! 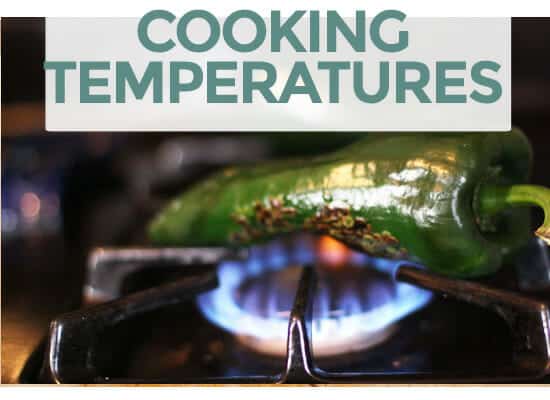 This is a tricky one, but basically you should use cooking temperatures as a guideline rather than a hard and fast rule.

For starters, if your oven runs hot or cold (use an oven thermometer to find out), you’ll want to adjust based on that.

But, more importantly, for stovetop dishes, somebody’s high heat, might be your medium-high heat depending on the stove!

The only way to get a good feel for what cooking temperature you need to use is to cook a lot! Learn your stovetop and your oven and use the recipe instructions as a guideline rather than a rule! 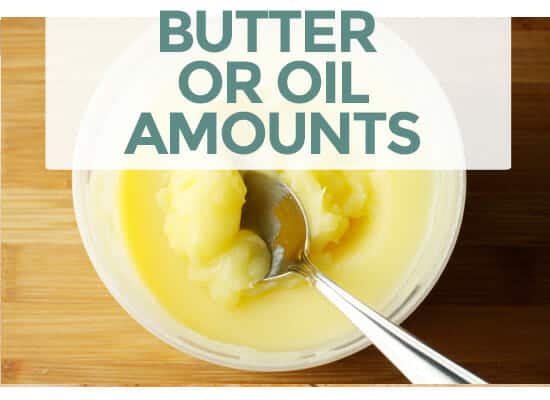 Here’s a naughty secret: Recipe writers frequently reduce the amount of oil in their recipes to make the nutritional facts look better. BUT AT WHAT COST?!

Baking recipes should be pretty spot-on here, but non-baking recipes can vary a lot. For starters, based on what pan you are using, you might need wildly different amounts of oil. If I’m using a nonstick pan, I can get away with a tiny amount, but if I’m using stainless steel, I’ll need much more.

What I would recommend instead is learn how much oil you need for your cookware. That’ll give you a good feel for where you should start with a particular recipe. If you need a tablespoon of oil to coat your large skillet and the recipe you’re using calls for 1 teaspoon of oil, you know what to do. 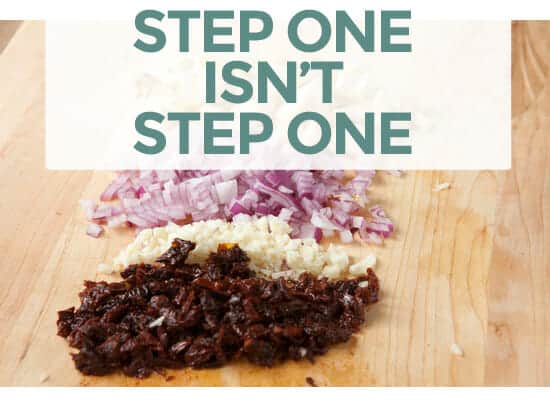 Most recipes don’t include a prep step but it’s one of the most important steps for successful cooking.

I always recommend prepping every ingredient (chopping, etc.) before you start cooking. That way when you do start cooking you can focus on the actual cooking and you aren’t multi-tasking.

This is not what you see in the world of fast cooking TV competitions, but this is how even the best chefs start their recipes.

Traditionally called mise en place, it means everything is in its place and ready to go.

It should always be step one for any recipe but is almost never written.

The ironic thing about the things on this list is that you will find them all in my own recipes. That’s because when you write recipes, you try to be specific and succinct, but as a recipe reader, I think it’s good to know areas that aren’t hard and fast rules.

In short, it’ll make you a better cook if you know what sections of recipes you should adapt to your kitchen and personal tastes.

This is my most important list, but I’m sure there are others!

What are some things that you ignore in recipes? Leave a comment!