This is why we’ve created items like cameras — to capture memories so we can re-live those moments.

It’s why the show Hoarders exists.

But when we save things forever, we sometimes lose a piece of that original item as well. A photo is never as good as the original moment.

Some things are meant to be lost and the best thing that we can do is enjoy them while they are here and then say Adios.

Over the last many decades the world of food preservation has gone overboard. It’s not strange to see food on shelves now that can be eaten a decade from now. In most cases, I think this extreme type of preservation is a bad idea and used to shill cheap food to unknowing people.

Simply by choosing to eat food that dies, we can actually eat healthier!

Think about the foods that go badly the quickest in your house: apples, spinach, tomatoes, lettuce and other greens, fresh vegetables, berries and grapes…

I don’t think that it’s a coincidence that those foods are also some of the healthiest foods that you can eat.

It makes complete sense to me actually. Those foods are nutrient packed and they spoil because bacteria are smart little things and want those nutrients! You should want them also!

Food that nourishes dies because if you don’t eat it, something else will.

Meanwhile, if something lasts for months, or years, without going bad, you have to wonder what’s actually in that thing. Can it even be called food? What could be in that thing if even bacteria won’t touch it?

Let’s look at some examples.

Here’s something that may or may not blow your mind: McDonald’s does not make their burgers the same day they serve them to you.

All of their food is made in huge factories and shipped out to their restaurants. It can sit in freezers for months without any difference in flavor or texture due to amazing food science.

A few years ago there was a project that went pretty viral where someone left a happy meal out on their table for six months, 180 days, without covering it or in any way protecting it from nature.

This was the result: 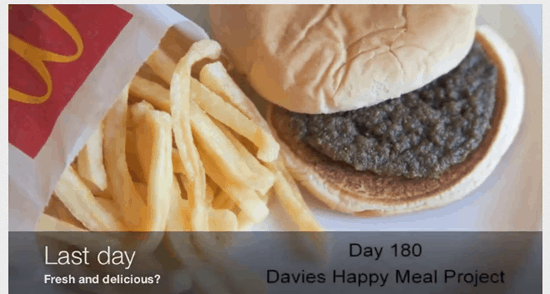 Now, I’m not recommending eating this after it sat out for 180 days, but I wouldn’t recommend eating it on day one either.

The point is that this burger and fries is so completely stripped of any sort of nutrition and so packed with preservatives, that even BUGS don’t want it.

If the food you are eating regularly can last for 180 days sitting out on the cabinet, then you might be better off nutritionally just eating the cabinet.

Quick Update: Astute reader MattW sent me a very detailed Serious Eats project that got to the bottom of why the McDonalds burger didn’t rot. It turns out any burger of the same size won’t experience decay. For more info on how McDonalds makes their burgers, you can check out their ingredients list.

Humans are smart and over the years we’ve come up with many ways to preserve real food. Techniques like canning, pickling, and drying are techniques used to give us a way to hang onto food for a few extra months.

It’s important to note the difference though between taking a food that would otherwise die and finding a way to store it and creating a food product that just lasts forever.

After all, if I open a jar of homemade jelly or a jar of pickles, they will mold after a few weeks.

If I open a package of Twinkies, they will still be Twinkies for months. Barely changed.

And for that, they need a new kind of flour.

One of my biggest pet peeves has to do with flour.

If you check out the ingredients list on most manufactured foods, one of the first ingredients will be “Enriched White Flour”.

When I saw this for the first time, I thought it was probably a good thing. After all, “enriched” means to make better right?

Well, that depends on who is defining better.

It turns out that even though perfectly normal flour has a pretty long shelf life, many many months, it wasn’t long enough for food manufacturers. They wanted something that lasts for years or even decades.

The history of how this flour got created is pretty interesting actually. For a start on its history, you can check out the Wikipedia page.

What’s important though is that food manufacturers learned that if you strip all of the nutrients out of flour, and then add a few nutrients back in, the flour is shelf-stable for years.

That’s because bugs are no longer interested in it.

So then they put it in all sorts of baked goods and ship it out to you!

Now, I’m not going to sit here and write with a straight face that I don’t have a few products with enriched white flour in my pantry right now. I certainly do.

But I know that those products aren’t healthy. They aren’t providing me with any real nutrition. It just so happens that I like them.

If you are confused by all the hype and crazy diets out there, just eat stuff that dies.

If your fridge and counter space is packed with foods that you need to eat within the week or you will lose them, then you are probably eating healthier than most people in America.

These foods wither, mold, and decompose because other things are eating them.

You should be eating them first.

Do you eat foods that die? Leave a comment!

13 Responses to “Real Food Should Die” Leave a comment