I’m sure I’m not the first food blogger to make the observation that messy food is delicious.

I actually completely messed this Rajas Poblanas dish up, but I basically just made it messier, which made it better.

The original dish isn’t supposed to be quite so creamy. I basically ended up making a queso dip with onions and peppers in it.

Not really a problem in my opinion!

The point is though that this Rajas Poblanas recipe is pretty quick to make and has some great flavors going on. You can make it sloppy or not, but it’s pretty hard to go wrong.

1) Roast poblanos over an open flame on grill or gas stove until they are well-charred.

2) Add peppers to a large bowl, cover, and let steam for 10 minutes. Then peel peppers, cut off stems, cut out seeds, and slice thin.

3) Slice onions and add them to a medium pot with a drizzle of oil. Cover over medium heat until they start to soften, about 8 minutes.

4) Add minced garlic and spices to pot. Cook for another few minutes.

5) Add 1 cup of water to the pot and use the liquid to scrape off any stuck bits.

6) Simmer onions and spices until the water completely evaporates, about 8 more minutes.

8) Stir in sour cream and cheese and season with salt.

9) To fry tortillas, add a drizzle of oil to a small pan and add a corn tortilla over medium-high heat. Cook for about 20 seconds on side one and then flip. Cook on the second side for about a minute and then flip back. The tortilla should be browned and starting to crisp. Remove it and let it drain on a paper towel. It will continue to crisp as it cools. Repeat with all the tortillas so you have crispy tostadas.

There is one and only one thing that makes the base for this recipe: roasted poblanos.

You can roast them on the grill over high heat, under your broiler, or just directly on a gas stove.

Roast the crap out of them though. They should be completely charred.

Once they are basically black, stick them in a bowl and cover them so they can steam for about 10 minutes.

Then you should be able to easily rub off the skin. Chop off the stems, remove the seeds, and chop the peppers into long strips.

Maybe eat a strip just like this because they are super-flavorful.

Besides the peppers, there is a good amount of both onion and garlic in this dish.

One whole onion should do the trick along with as many cloves of garlic as you want really. Four is pretty much the minimum.

For the onions, don’t worry about dicing them up. Just slice them into strips like the poblanos.

Rajas means “strips” in Spanish which is why the veggies are all cut into strips. You want them to be pretty chunky in the finished Rajas Poblanas.

The dish itself is pretty easy to cook, but make sure to give yourself about 30 minutes to make so you can really let the flavors develop.

Add a few tablespoons of oil to a medium pot and add the onions over medium heat.

Let them cook for about eight minutes until they start to soften. Then add the garlic, spices, and about a cup of water. Use the water to scrape up any little bits that are stuck to the pot. The water will also help the flavors mingle.

These are the spices I used for my version. I show you these mainly to show off my new jars that are nicely labeled and organized.

Anyway, return this to the heat and simmer it until the water completely evaporates. It won’t take that long, probably another 6-8 minutes.

Then stir in your drained beans and sliced peppers.

So you want to add some dairy products to the rajas, but I made a major mistake that turned out being delicious. I used table cream instead of sour cream.

You probably want to use sour cream unless you want it to be messy.

Add in the sour cream and cheese and cook everything until the cheese melts. Ideally, you wouldn’t have a cheese dip that I ended up with, but strips of onions and peppers laced with some cheese and cream.

This turned out to just be a hot mess.

A delicious mess, don’t get me wrong, but a mess.

Season the stuff with some salt and it’s ready to eat!

Assuming you made these correctly, the might be sturdy enough to serve in a soft taco, but I like to serve them on crispy tostadas.

You can buy these pre-made, but I also seem to have extra corn tortillas in my fridge so I just made them.

If you want to make them, just fry each tortilla in a bit of oil over medium-high heat. Flip them every 30-60 seconds until they are browned and crispy. Then let them cool and drain on a paper towel before serving.

Serve each tostada with a big serving of the Rajas Poblanas along with whatever toppings you can dream up. I used some avocado, cilantro, and salsa.

I’ll be the first to admit that it isn’t the prettiest thing I’ve ever cooked, but man was it good.

Betsy actually called it “restaurant quality”. That’s not a compliment she throws around lightly!

A few other Tex-Mex recipe ideas: 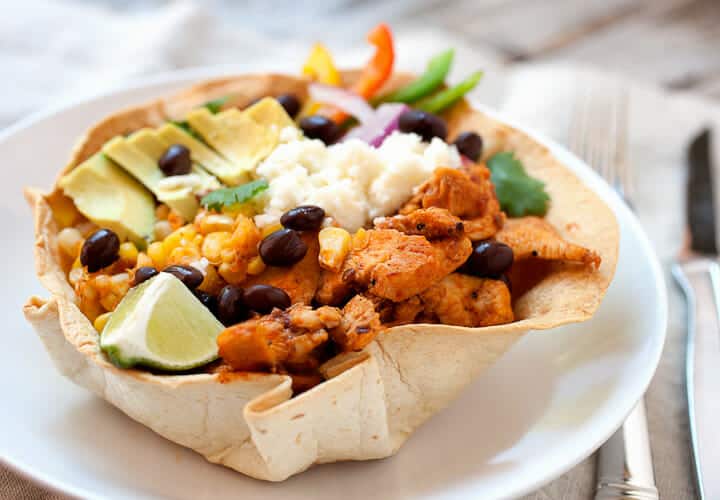 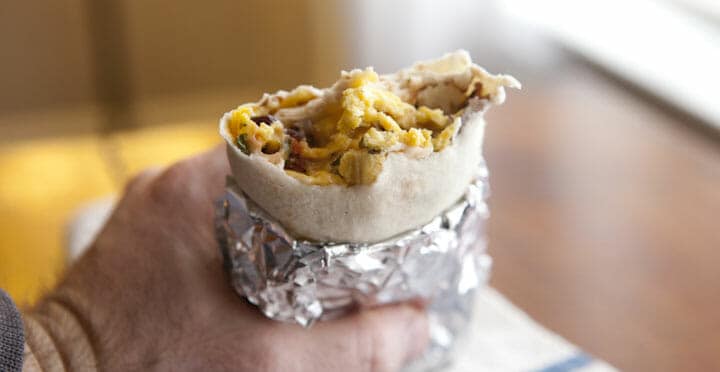 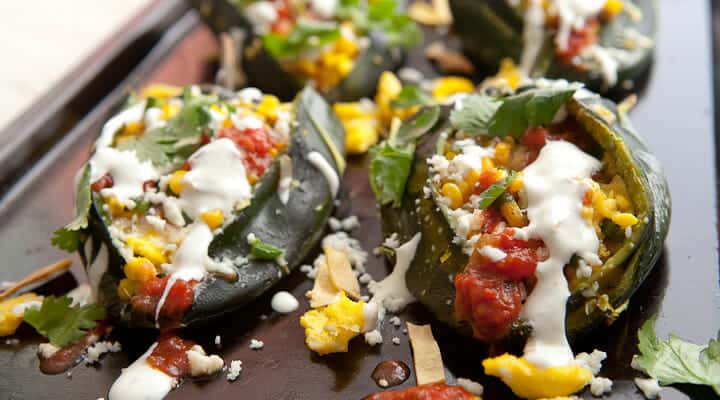