I sort of feel like I’ve been training for this post my entire life. After all, homemade BBQ sauce is one of my favorite things to play around with when I have time. A good BBQ sauce can go along way to making you a great griller and cook and the sauces can completely span the flavor chasm from spicy to tangy to sweet. Whatever you want, you can find it in a BBQ sauce.

Whatever color you want, I mean.

Of course, this is a fun post. Unless you are a crazy person, I’m not recommending that you actually make all of these. But, they are all fairly simple to make and have great flavors. The red and yellow sauces are about as basic as BBQ sauce can get and the green and purple get a bit crazier. Each sauce is doable in under an hour though.

Not to show my hand, but the green is definitely my favorite.

Hopefully these rainbow BBQ sauces will inspire you to pick a color and mix up a batch before summer ends!

A classic red bbq sauce that is ketchup based. Nothing fancy and a good intro to bbq sauces. 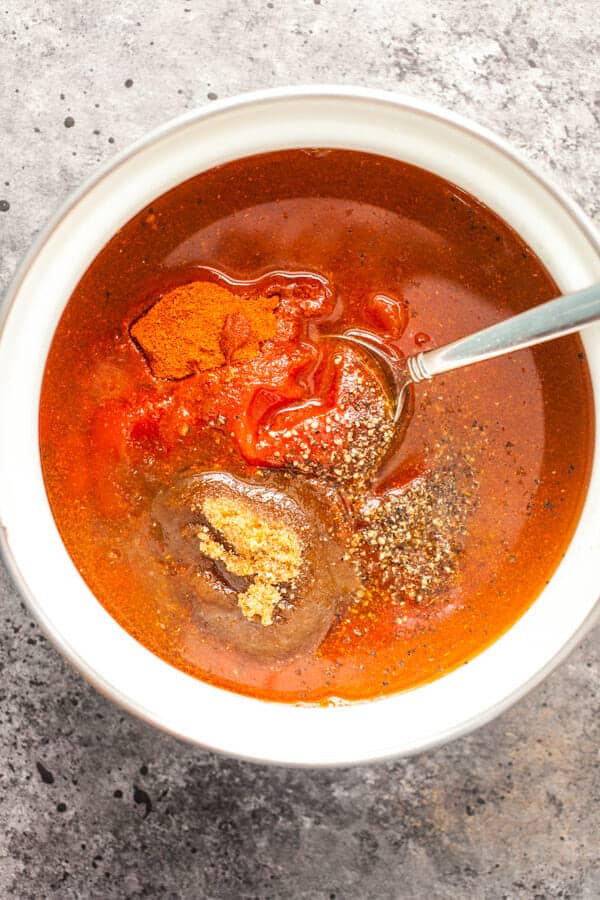 Like I said, this sauce is a pretty basic ketchup-based sauce. Nothing fancy here, but good solid BBQ flavors. Works great as a glaze on a ton of different grilled items from chicken to hamburgers. You could use it on ribs, but I like something a bit more tangy for my ribs. 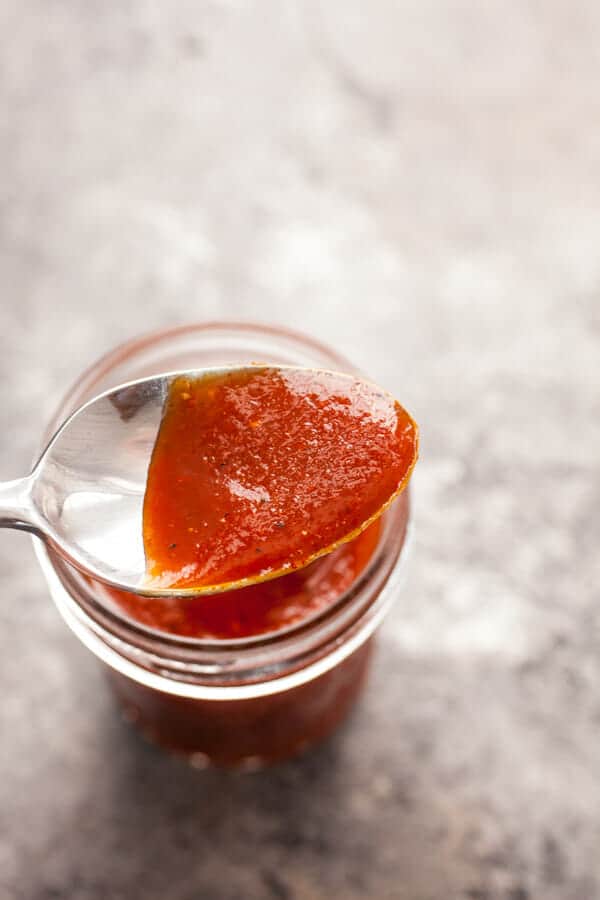 Yellow BBQ sauce is a classic mustard based sauce. Embrace the tang!

You could use a dijon mustard for this guy if you wanted but I used plain yellow mustard which makes the color really bright. It’s tangy, but it has enough sweetness to balance it out. A knob of butter in the sauce helps balance it as well. 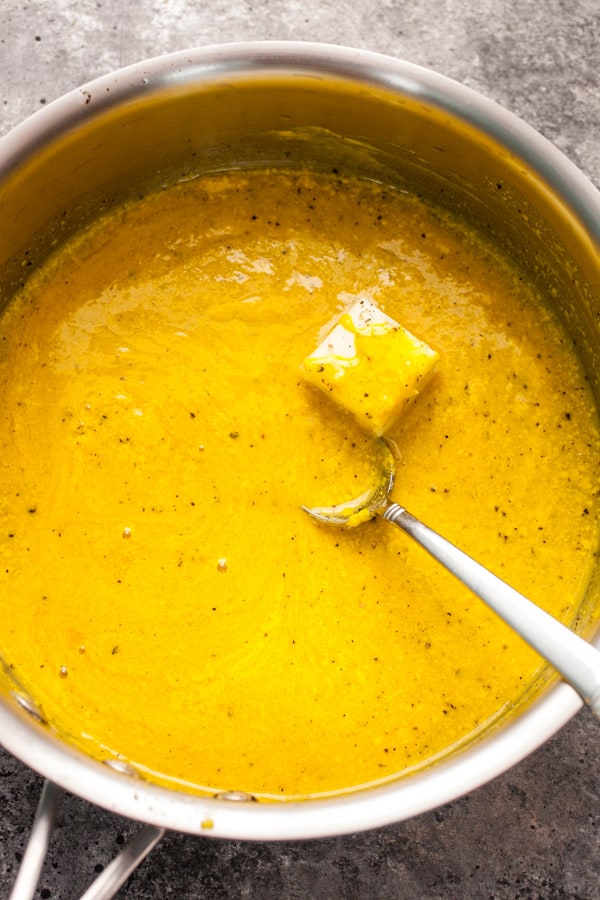 Basically you just heat the sauce until it’s all combined and it’s done. Nothing fancy! 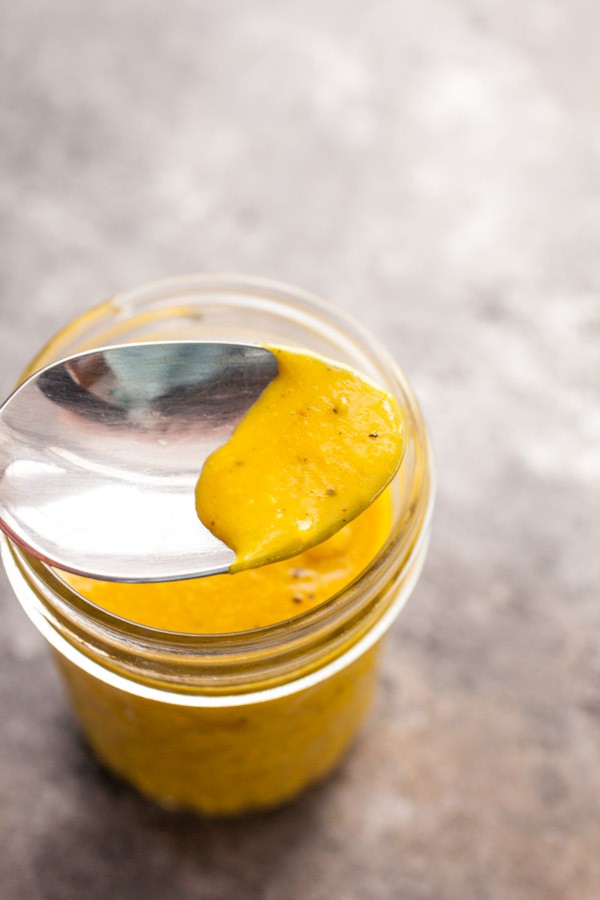 Okay. This is my cheater sauce in the list. Even my three year old knows that “orange is a kind of red” so yea… I just mixed the red and the yellow sauces together. You know what though, it’s pretty great! Kind of the best of both worlds! 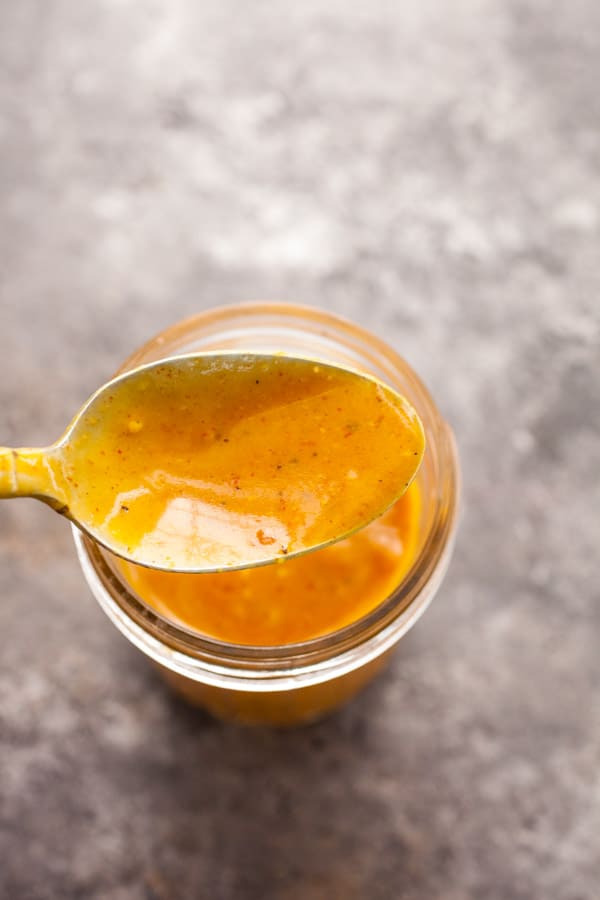 Green BBQ sauce is almost a salsa, but it glazes nicely on grilled things!

Alright. Now we are getting kind of crazy. This is veering very lose into salsa territory but it has enough vinegar and sugar to push it into a BBQ sauce. If you brush it on a grilled thing (I tested it on chicken thighs) it caramelizes a bit like a good BBQ sauce would do.

It’s definitely the most work intensive of the sauces, but also my favorite. Go figure. You have to roast the tomatillos and onion first in a hot 450 degree F. oven and then add everything to a pan to simmer until the veggies are soft. Leave out the cilantro from the simmer so the color stays bright green on it. 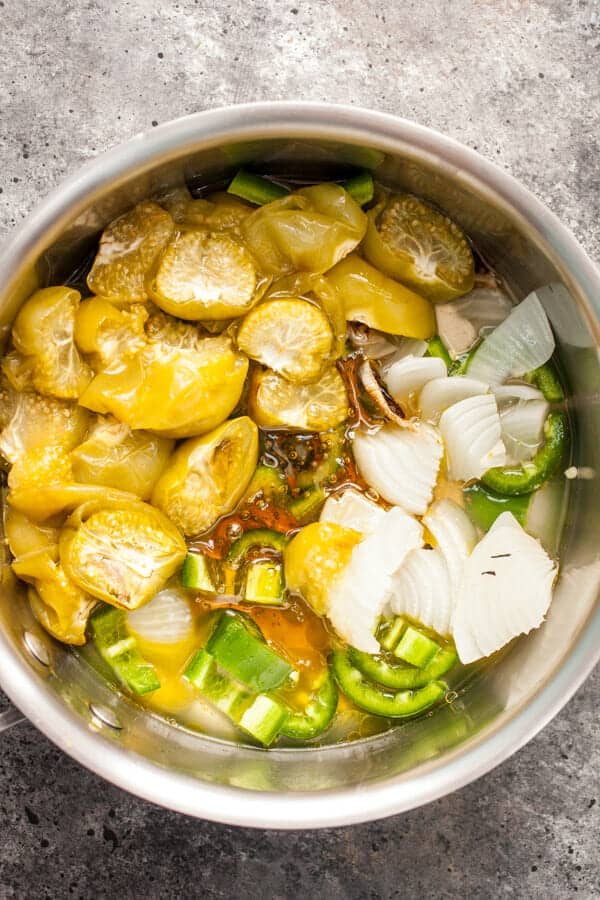 Blend everything really well and you’re done. It has a tiny spice to it, but it’s not knock-your-socks-off spicy. SO GOOD. 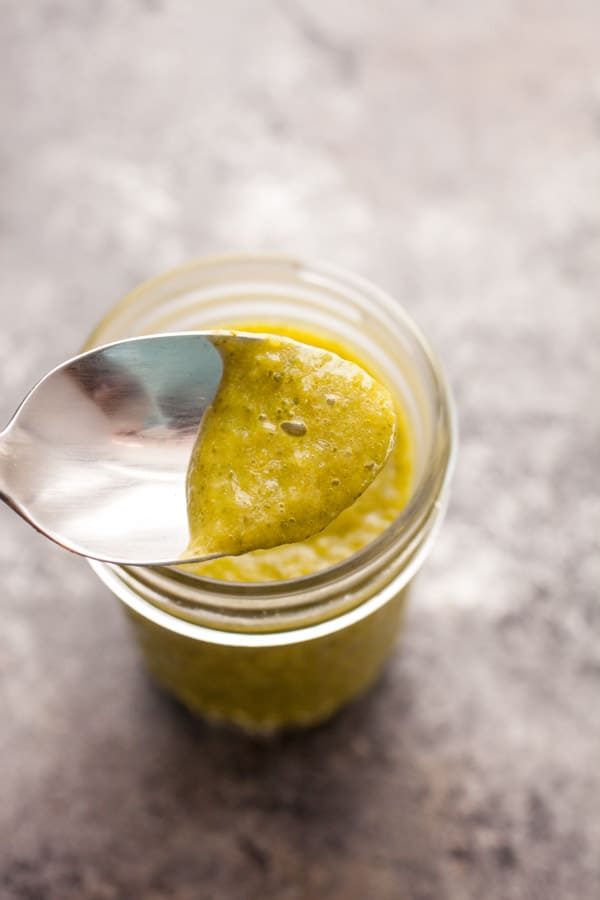 Okay, now for something completely different.

Purple BBQ sauce with lots of sweetness from blueberries!

This blueberry BBQ sauce is amazing. It’s sweet! But, not in a cloying way. Big surprise but both of my kids LOVED this one. They were dipping stuff in it like crazy. 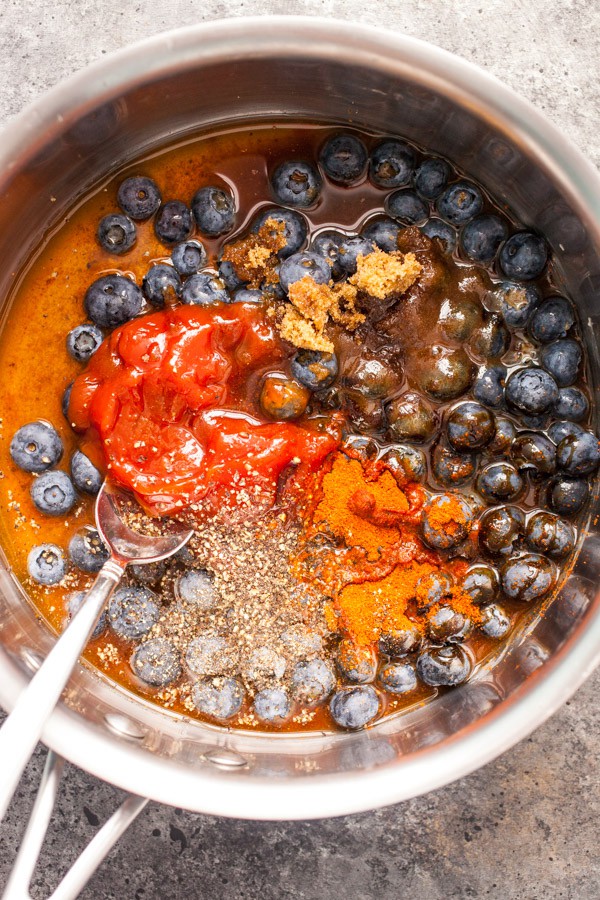 Again, just simmer everything together for 10-15 minutes and then blend up the sauce.

This is gonna sound kind of crazy but I think this sauce would be very good on savory pancakes (corn cakes). Heard it here first. 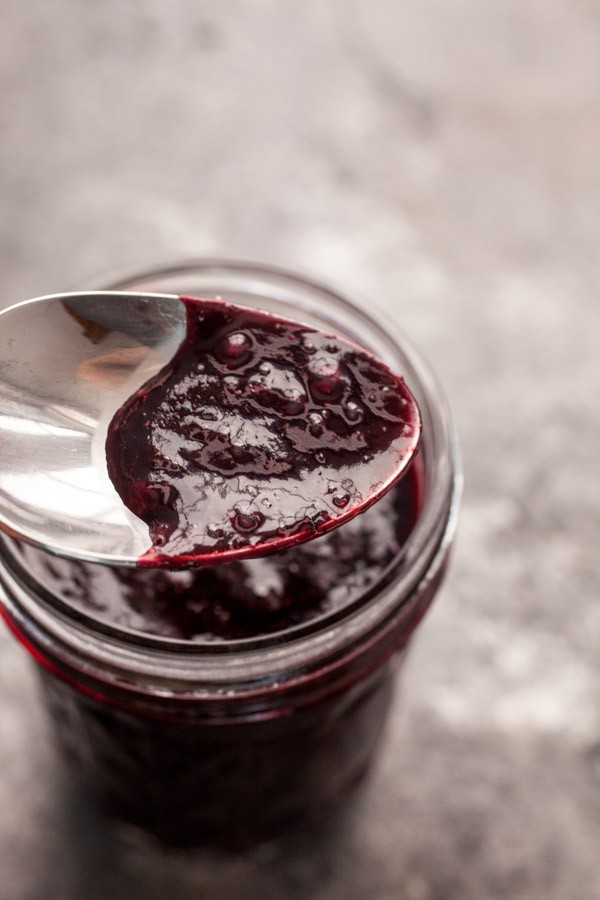 These are fun. Just look at the colors! It made me smile to make them and made me really smile to eat them. 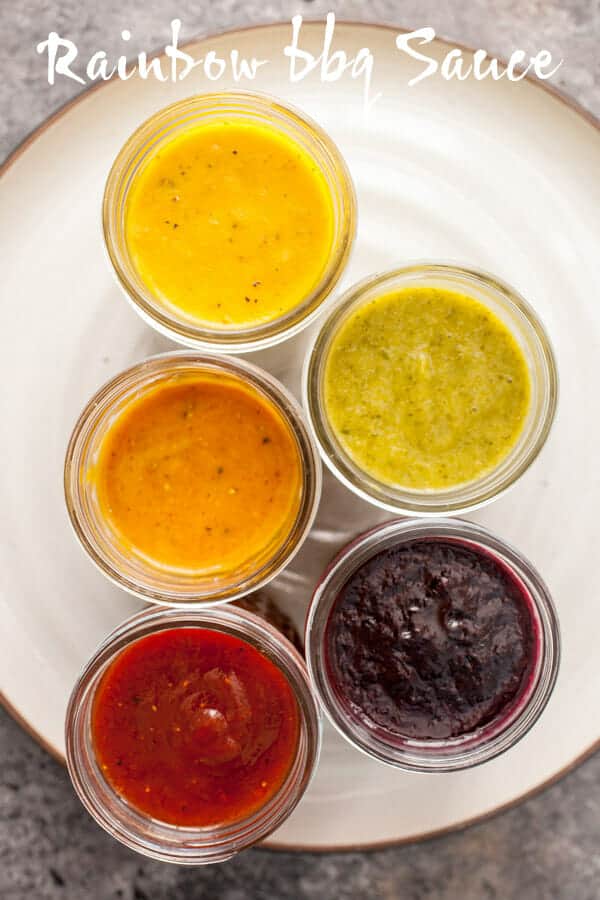 All of the sauces will keep fine in the fridge for a week or two. The purple and green sauces will degrade first since they have a lot of fresh fruits and veggies. The red, orange, and yellow sauces would keep fine for a month honestly.

What’s your favorite color of the rainbow? Leave a comment! 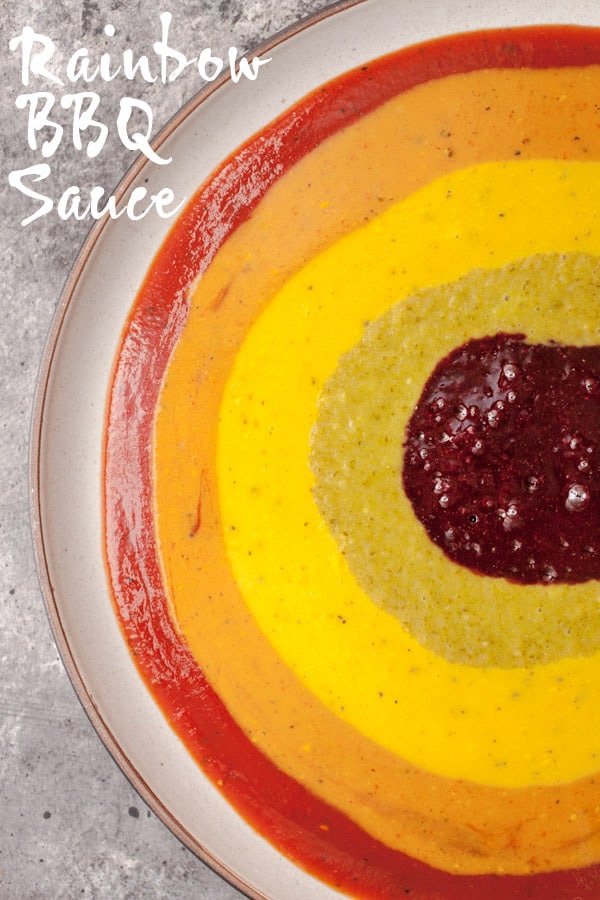