This post is sponsored by Old El Paso. I was asked to be one of their Freshest Bloggers this year so you’ll see some fun Tex-Mex action occasionally. This recipe is designed to use their Soft Tortilla Taco Boats or Mini Taco Boats!

I love making enchiladas, but I’ll be the first to admit that they aren’t exactly a quick meal. Between making the fillings, prepping the tortillas, assembling, and baking, a real enchilada dish may take me two hours to make. Not exactly a weekday project for most people!

That’s why I really have grown to love these large taco boats which are a great middle ground for a dish like this. They let you stuff in a lot of enchilada filling, but without the hassle of assembling. They are big enough that 1-2 of them make a full meal or you could throw in a few mini taco boats for the kiddos!

These Pulled Chicken Enchilada Taco Boats are the perfect way to get great enchilada flavors without all the hassle. Your family will love them!

These easy baked taco boats have all the delicious flavors of a classic chicken enchilada dish but are about half the work! YUM!

In a large skillet over medium heat, add olive oil and chicken. Slice chicken for easier cooking. Add Old El Paso Taco Seasoning and cook for 10 minutes, stirring regularly until chicken is cooked. Break up the chicken as it cooks into bite-sized pieces. Add diced onions and peppers and cook for another minute or two until veggies soften.

Add diced tomatoes to skillet along with ½ cup red enchilada sauce. Turn heat down to low and continue to cook to thicken mixture. Season with salt and pepper to taste.

Lay out taco boats in an 8×13 baking dish. Divide grated cheddar cheese between boats and top with cooked enchilada chicken mixture between the boats. Top with crumbled queso fresco. Drizzle each taco boat with 1 tablespoon of enchilada sauce.

Bake the taco boats at 350 degrees for 15-20 minutes until browned around the edges and bubbling hot. Remove and let cool briefly.

Make this filling vegetarian by substituting one (15-oz) can pinto beans for the chicken.

If you want a spicier filling, add a diced jalapeno to the filling or 2 tablespoons spicy hot sauce.

I used a simple chicken filling for my taco boats which starts with taco seasoning, onions, peppers, enchilada sauce, and diced tomatoes. If you wanted it spicier you could add some hot sauce or diced jalapeno but I tried to keep it in the realm of spiciness that I knew my kids would at least try

Once everything is cooked in the skillet I added about 1/2 cup of enchilada sauce to the skillet and saved the rest for drizzling on the taco boats.

Once the filling is done, the only trick to remember before baking these is to start with a layer of cheddar cheese at the bottom of the boats. For one, melted cheese is delicious, but also the cheese actually protects the boat from the liquid in the filling so the shell doesn’t get soggy!

These only need to bake for about 15 minutes and they will come out crispy on the edges and bubbly and delicious inside.

For a quick sauce, I stirred together equal parts sour cream and red enchilada sauce. Doesn’t get much easier!

Top it all off with some handfuls of fresh cilantro and fresh avocado. YUM! 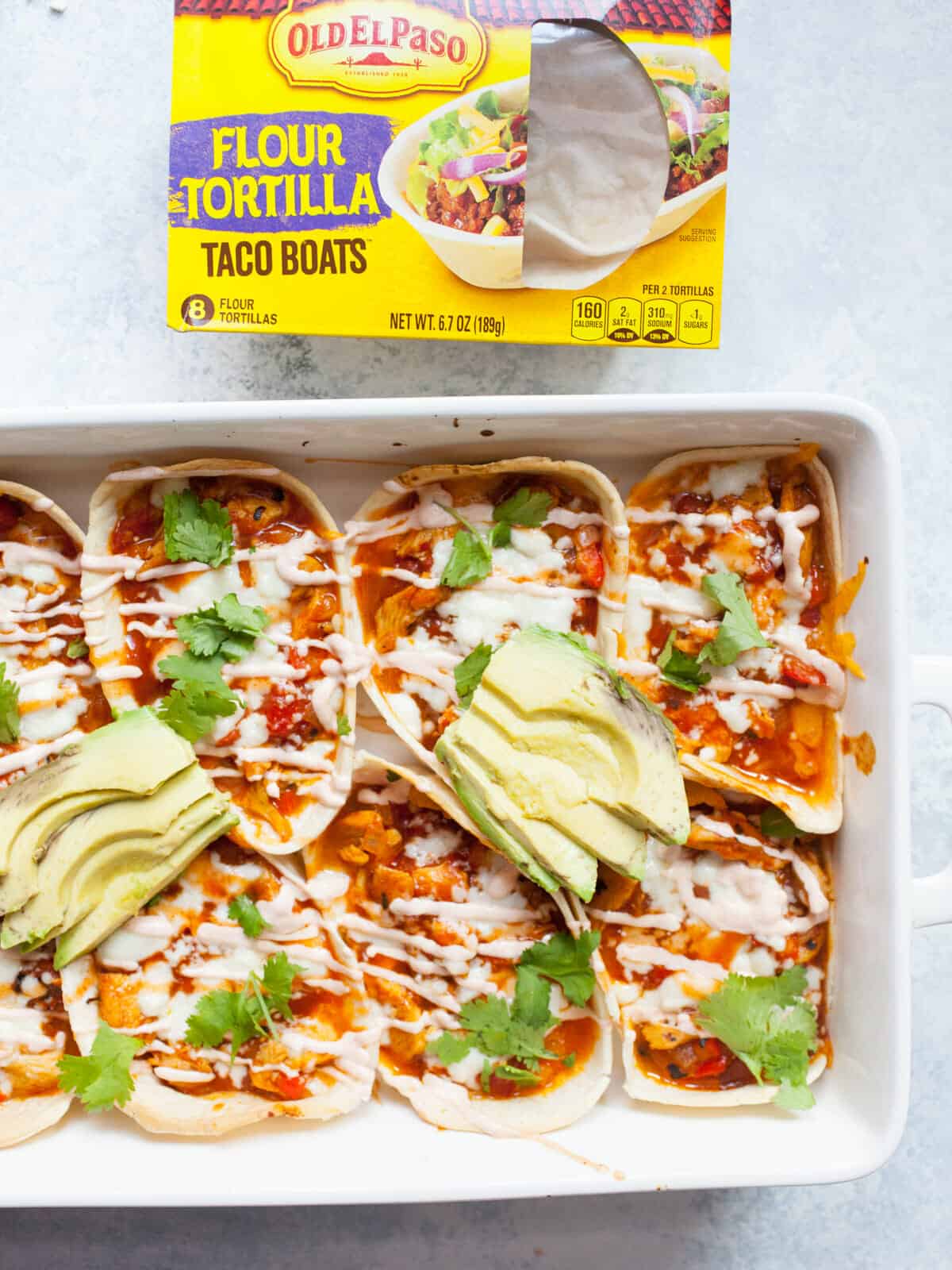 I love the flavor in these and they make quick work of a dish that usually would have an extra hour in the prep time for rolling and making the enchiladas. Gotta love it on a busy weeknight! 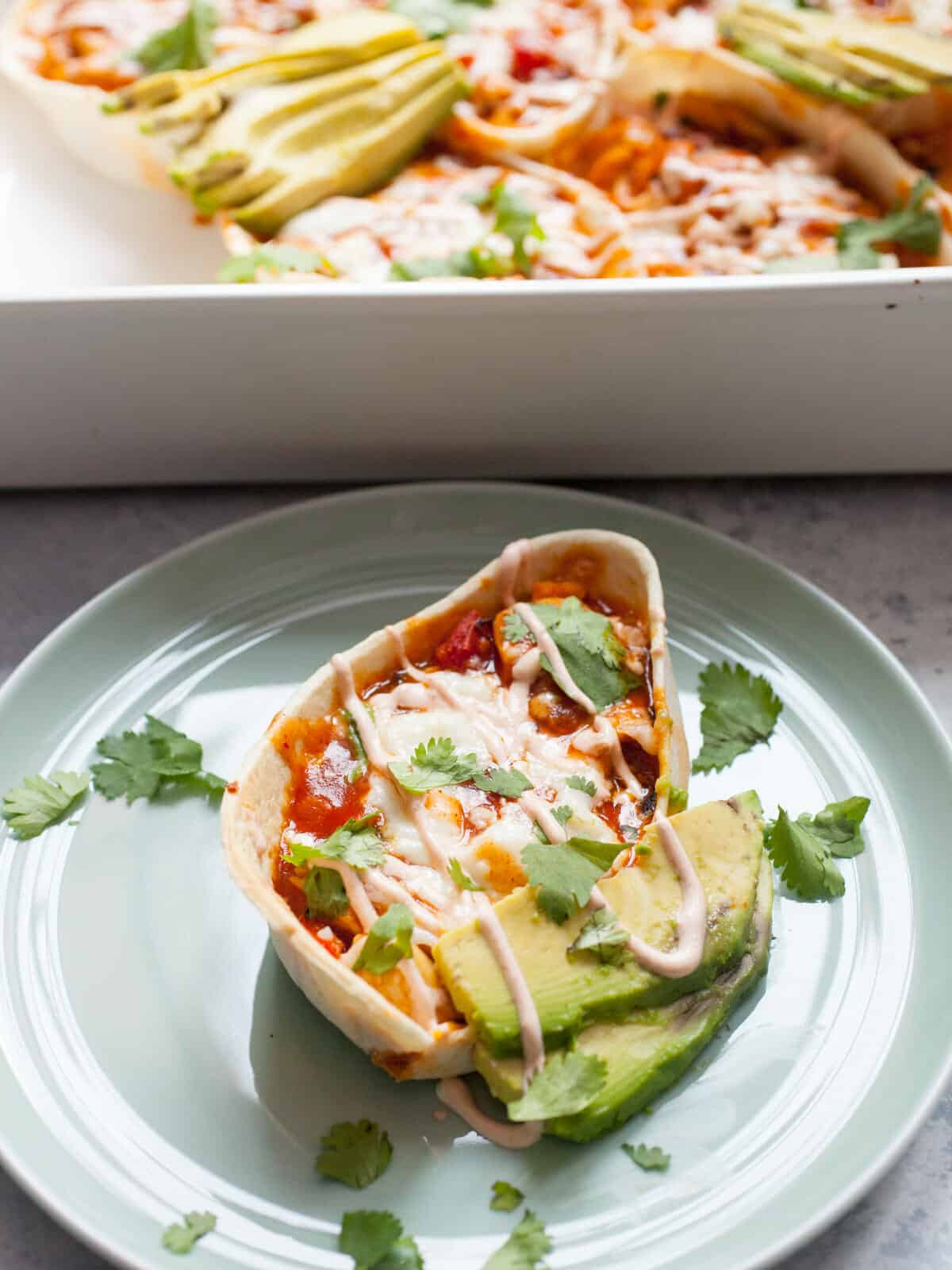