It can go without saying, but I’ll say it anyway: Potatoes Au Gratin are one of the best side dishes of all time. They go great with any sort of protein or, honestly, I can make a meal of a good potatoes au gratin with a side salad. SO GOOD.

One small problem. If you’re cooking potatoes au gratin it means your oven is gonna be one for at least an hour. So, one of the best side dishes for things like grilled chicken or grilled steak is actually pretty brutal to make in the summer.

So let’s make potatoes au gratin in foil packets! These are not your bland, minimal foil packet potatoes. These are rich, creamy, and garlicky and everything that you would want from the larger classic casserole version.

Second bonus: Because you want to use smaller packets for these, they cook faster!

Make potatoes au packet for your next casual grill day (4th of July?)!

A classic French side dish made on the grill so you can keep your oven off! Great for any grilled summer meal.

1) Combine cream, shallot, garlic, salt, pepper, thyme, and red pepper flakes in a small pot and heat over low heat until it’s steaming. Let it simmer for about 10 minutes, stirring regularly. Then pulse mixture in a food processor or just mash it together to mash up shallot and garlic.

2) Wash potatoes well and either A) slice potatoes thin with a mandoline or just cube into 1/2-inch cubes. Divide potatoes between four foil packets. Double wrap the foil on the bottom to make sure it doesn’t tear.

3) Once potatoes are in foil packets, pour cream mixture over the potatoes. Divide it evenly. Cover packets with more foil and seal tightly.

4) Cover grill and grill the packets over low indirect heat (if you’re using a gas grill turn off all the burners except one and cook the foil packets off the burner). Grill for 20 minutes, rotate packets (but never flip), and grill for another 20-25 minutes. Test the potatoes to make sure they are tender.

5) Open the packets by removing the top piece of foil from the packets. Add grated cheese to the potatoes. Cover grill and grill for another 10 minutes until cheese is very melted.

The key to making these potatoes taste like the classic french dish is to use the same method of cooking the potatoes in a garlicky cream mixture. So step one is making that cream base! Just combine cream with some garlic, shallot, salt, pepper, thyme, and red pepper flakes.

Let that mixture simmer over low heat for about 10 minutes and then either mash it up well or pulse it a few times in a food processor to really combine the flavors. Some chunks are fine though!

Now let’s talk taters. You could use Russet potatoes, but personally I like to use new potatoes.

You have two options for these. The classic option is to use a mandoline to slice the potatoes really thin. This is actually easy and fast if you have a mandoline. If you don’t have one, I wouldn’t recommend trying to slice them unless you want to drive yourself crazy.

Single the potatoes in a few foil packets! I recommend doubling the foil to prevent it from tearing. Ideally, you should get four packets out of this recipe so plan accordingly. Each packet will serve 2 people as a side dish.

Once your potatoes are prepped in the packets, pour over the cream mixture. Divide it evenly between the packets obviously.

Cover the packets with a second piece of foil and seal them well. Then grill the potatoes over LOW and indirect heat. If you’re using a gas grill, turn off all the burners except one and then move the packets away from that burner. Basically you are making an oven out of a grill!

Grill the packets for 20 minutes (grill covered), then rotate them and grill for another 20 minutes. Whatever you do, don’t flip the packets. You’ll make a big mess!

After 40-45 minutes, the potatoes should be tender and the cream mixture should be thick and delicious. I would test the potatoes to make sure they are done though. Then remove the top piece of foil from each packet and add the cheese!

Another 10 minutes on the grill (covered) and the cheese will be really melty and delicious.

Keep your oven off and stay cool this summer, people. But, still make potatoes au gratin! 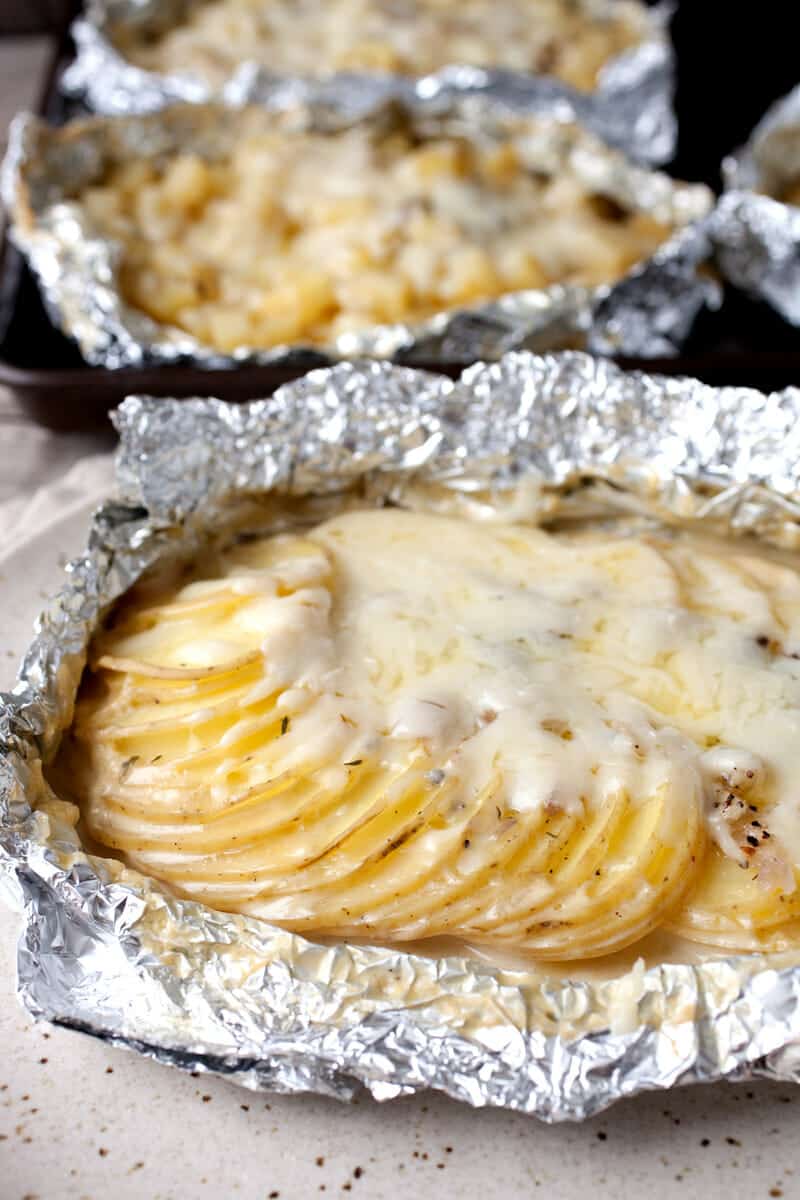