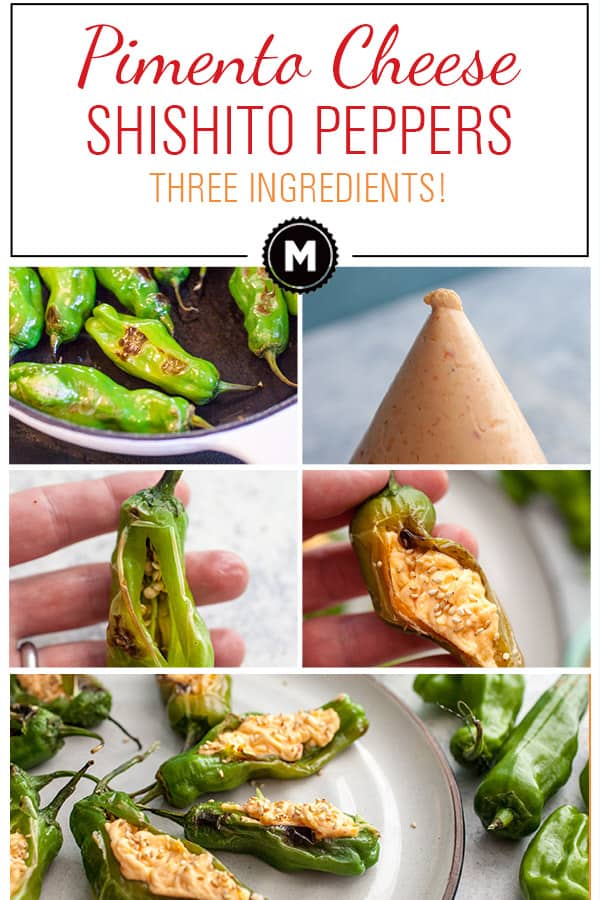 This Stuffed Shishito Pepper dish is a delicious twist on classic seared shishito peppers. Stuffed with creamy pimento cheese, they are slightly spicy and creamy. It’s a nice mash-up of two delicious appetizers, smashed together into one great bite.

I remember the first time I had shishito peppers… it wasn’t very long ago actually. I was in my 30s! Betsy and I were out to eat at a sushi place and the table next to us ordered this big pile of charred peppers dusted with sesame seeds. It looked amazing and I ordered a batch. I probably would’ve skipped right by them on the menu if I hadn’t seen them.

That was many years ago and now shishito peppers are more popular and you can find them at most stores these days. I usually like these peppers charred and topped with bonito flakes (like this version), but these pimento cheese stuffed peppers came to me in a dream and I had to try them out. (What? You don’t dream of pimento cheese? Weird!)

I actually think that this version of the shishito pepper is a little more accessible if you are new to them. The creamy stuffing cuts the sharpness of the pepper and tastes like comfort food at its best. Plus, they are easy to make, taking just a few minutes and three ingredients.

Well…. yes and no! MOST of them are not spicy, but I’ve found that about 1 in 15 or so will pack a surprising punch. It’s kind of like pepper roulette! The mild ones are very mild with just a tiny kick to them, similar to a poblano pepper. But, the spicy ones (which are less than 10% of the peppers) pack a punch that is similar to jalapenos, which makes these stuffed shishito peppers a close cousin to the very popular jalapeno poppers recipes out there.

These beauties are available at most stores. Shishito peppers aren’t really spicy which is why they are great to eat whole.

I only know one way to make these bad boys. Get a sturdy pan or cast iron skillet very hot (medium-high heat). Drizzle in a little neutral oil, like canola oil, and let them char quickly. Just a minute or two on each side should do the trick. You don’t want to cook them too much or they will get soggy.

Once they are charred, pull them out and let them cool. Done deal.

How to stuff these peppers

For the filling, I just whipped together the pimento cheese with some cream cheese to lighten it up a bit.

Then I filled a sturdy plastic bag for easier piping.

Once your peppers have cooled down a bit, slice them open. No need to remove the seeds or anything.

Pipe in some cheese filling and top with a sprinkle of sesame seeds and you’re ready to rock.

If the piping option is a little too fancy for you, you could just scoop the filling into each pepper using a spoon, but the piping option does make for a better appearance and is actually easier once you get the hang of it.

I sprinkled mine with some sesame seeds out of habit, but that’s very optional.

Shishito peppers aren’t normally stuffed, but any stuffed pepper is good in my opinion. I can think of a few really fun stuffing ideas for these if pimento cheese isn’t your thing.

Three ingredients is all it takes to make these beautiful charred and cheese-stuffed shishito peppers. They will go fast. Make a double batch!

Here are a few other spicy appetizers!