Betsy and I took a trip to DC in March and found ourselves in a fancy coffee shop on 14th street one morning. I got a croissant because this looked like the kind of place that would have great croissants (correct). Betsy went with a slice of pesto kale quiche. It didn’t seem like a great order honestly. Quiche? I can make quiche.

But somehow she proved me wrong yet again. We both decided, after big forkfuls of it, that it was one of the best we’ve had.

I made sure to take a look at who made the quiche as we were leaving and I was pleasantly surprised to see it was made by Whisked! I happened to know the owner of the shop from my DC food blogging days and it was so awesome to see that her business was booming and that she was still making really good food.

I shot her a message and she was nice enough to share the recipe with me. Of course, the original recipe makes enough for dozens of quiches so I had to take some liberties to pare it down for an at-home version. I think it’s very close though.

I made this version for Mother’s Day last weekend!

Inspired by a Whisked! Bakery recipe.

For crust:
1) Stir together flour with salt. Cube cold butter and cut it into the dry ingredients using clean fingers or a pastry cutter. Work the butter into the flour until it’s in pea-sized pieces. Some uneven lumps are fine.

2) Stir in iced water until the dough just comes together. Some flaky pieces are fine. Turn dough out onto a clean surface and press it into a solid ball. Wrap the ball in plastic wrap and refrigerate for at least an hour, but ideally overnight.

3) When ready to make quiche, unwrap dough and roll out on a lightly floured surface until it fits in your pie pan with about an inch overhanging on each side. Fold crust up to form a sturdy crust edge.

4) Poke holes all over the crust with a fork (even on sides) and cover crust base with parchment paper. Weigh down crust with pie weights or dry beans. Pre-bake crust at 375 degrees F. for 20 minutes. Remove from oven and let cool. Then remove beans or weights.

For pesto:
Combine 1 cup packed kale and basil with lemon, garlic, and a pinch of salt in a food processor. Add enough olive oil to bring the pesto together in a smooth paste. You should need 1/4-1/3 cup. Set pesto aside for later.

For quiche:
1) In a large skillet, add a drizzle of olive oil over medium heat. Add diced onion and kale and sauté until soft, about 5 minutes. Season with salt and pepper. Remove veggies from heat and stir in pesto.

2) Add pesto and veggie mixture to pre-baked pie crust. Spread them around and sprinkle with grated parmesan cheese.

3) Whisk together eggs and half and half and pour eggs over the pesto mixture in the pie crust. Use a spatula to distribute eggs evenly in crust.

4) Bake until eggs are firm in the center at 375 degrees F. This will mostly likely be around 30 minutes, but could be a bit longer depending on your pan. Test the quiche by removing it and jiggling it. It should be firm, but gently jiggle, almost like set jello. If it seems liquidy at all, bake it for another 5 minutes.

5) Let quiche cool for 10 minutes before slicing and serving!

After years and years of crust making, I’m finally feeling pretty confident that I can whip up a butter pie crust without too much fuss.  I used roughly the same method for making this crust as I did for my smoked salmon quiche, but instead of using a food processor I just work the butter in with my fingers.

Then add just enough iced water to pull the dough together (usually 4-6 tablespoons). Don’t worry if there are some big flaky pieces. It will all come together.

Then fold the dough out and press it into a round disc. Refrigerate that sucker for at least an hour but preferably overnight.

Can you see the butter chunks?!

Then roll the dough out on a lightly floured surface. If you compare this to my earlier quiches on the site, my crust has improved dramatically!

I just roll mine out until there’s around an inch of overhang on the edges.

Then fold over the edges however you like and poke some holes in the crust to let steam escape while it bakes.

It’s really important to pre-bake crusts for quiche because the eggs don’t take as long to cook as the crust. But you need to fill the crust with something so it roughly holds its shape. They make fancy pie weights for this, but I always just use black beans.

I actually have a container of “pie beans” on my shelf. You can re-use them a bunch of times.

Bake the crust at 375 degrees for 20 minutes and it’ll be ready to go.

I served this quiche to my mother-in-law who claimed that she didn’t really like kale. The truth is that most people mess it up when they cook it. How could a leafy green this beautiful not be delicious?

For the pesto part, combine equal parts of basil and kale (the original recipe was like 3 pounds. HA!) and add a few garlic cloves, some lemon juice, and enough olive oil to pull everything together. You can kind of eyeball it, but you are looking for a smoothish consistency like this:

To add some extra texture and body to the quiche, sauté half an onion and another big bunch of kale (ribs removed and chopped) in a little olive oil until they are wilted and the onions are starting to take on some color.

Making and Baking the Quiche

Stir the pesto into the sautéed kale and onion mixture. Then scoop that into your pre-baked pie crust. Add a mountain of Parmesan cheese.

Spread all that out over the surface of the crust and then pour in your custard mixture. Six eggs and one cup half and half. Trust me. It’s worth it.

Use a spatula to push around the egg and filling to make it pretty even.

This will need to bake for around 30 minutes. You kind of have to watch it. It’ll be done when the eggs are set but it can still jiggle a tiny bit in the center. The whole quiche should be puffed and slightly browned in places.

A finished one is a thing of beauty and completely worth the work.

Let it cool before slicing and serving. The color and flavor is just great on this.

If you happen to live in DC, then you can find this original quiche at various Whisked! locations, but otherwise you’ll have to try the homemade version! 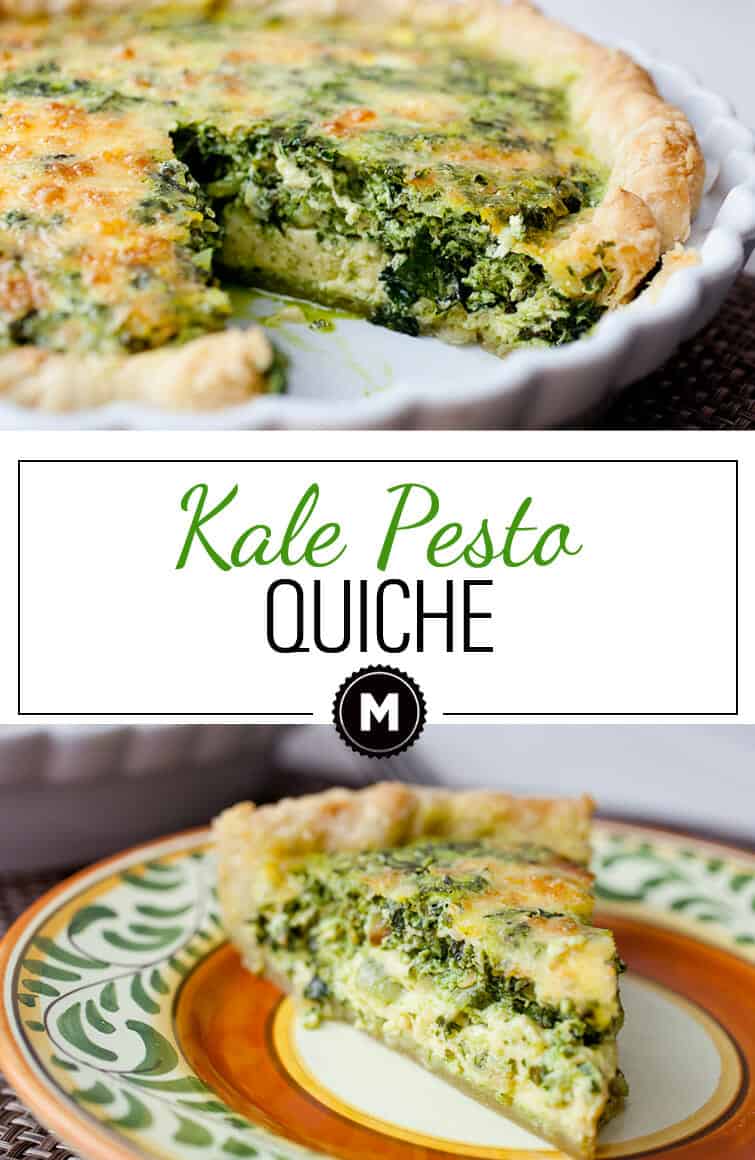