This post is sponsored by Flatout Flatbreads! Try their popular Artisan Thin Pizza Crust and check out flatoutfinder.com to find some near you!

Italian food already has a layered dinner option. You know the one: Lasagna. But this pizza stack is kind of a different beast and one that I’m completely obsessed with.

I first saw a situation like this when my friend Dan made a pizza cake (Here’s the video he made) which is, similarly, layers of pizza dough and toppings. He encased everything in a large pizza crust though and I wanted more of a free-form situation for my version.

Also, instead of making the dough (which has its benefits), I used Flatout Flatbread Artisan Thin Pizza Crusts which have the advantage of being really thin. It’s easy to crisp them up and that means the finished stack has these thin layers of crispy crust throughout. Plus, cheese, pepperoni, veggies, and more cheese obviously.

This pizza stack will easily feed four as a dinner but can also be chopped into smaller chunks for a fun appetizer! Stack it up and eat it up!

1) Preheat oven to 400 degrees F. Bake four of the pizza crusts at 400 degrees for 4-6 minutes until they are lightly browned and crispy. Remove and let cool.

2) Prep toppings by grating cheese, stirring sauce ingredients together, and cooking sliced peppers and onions in a skillet for 4-5 minutes over medium heat with olive oil and a pinch of salt and pepper until veggies are softened.

3) Start stack with an unbaked pizza crust. Top with a few tablespoons of sauce, about 2 oz. of cheese, and pepperoni.

4) Add a pre-baked crust to the top of that and top with cheese and peppers and onions. Repeat order, alternating with pepperoni and veggie layers. The top layer should be the second unbaked pizza crust so the crispy ones are in the center. Top pizza stack with pepperoni, peppers, onions, and cheese.

5) Bake pizza stack at 350 degrees F. for 15-20 minutes until cheese is bubbling and top crust is crispy. Remove pizza and garnish with fresh oregano. Let cool for a few minutes and slice pizza stack into four even pieces. You could cut them smaller if you were serving them as an appetizer.

This recipe is actually pretty easy to make. I mixed up a quick pizza sauce for my version which was just tomato sauce, salt, sugar, pepper, garlic powder, red pepper flakes, and a drizzle of olive oil. As far as I’m concerned you could use any pizza sauce though!

The key to making this recipe work is to pre-bake some of the pizza crusts, but not all of them. You want to pre-bake the interior crusts but leave the bottom and top crusts unbaked because they will be exposed to more heat while the stack is baking.

Pre-bake four of your pizza crusts at 375 degrees F. for 4-6 minutes until they are lightly browned and crispy. (I realize only three are pictured. It’s important to keep them flat while they bake so don’t cram too many on a baking sheet.)

The other toppings are pretty straightforward. Pepperoni and mozzarella are a must! You could obviously make a veggie friendly pizza stack also though and skip the pepperoni!

There’s no real science to the order of layers here, but do keep them thin. You don’t want any huge layers since there will be six layers in total!

I did alternating layers of pepperoni and veggies. My first layer (the bottom crust is NOT pre-baked) was a thin layer of sauce, cheese, and pepperoni.

Then I added a crispy pizza crust that I pre-baked and topped it with sauce, cheese, peppers, and onions.

To make sure the veggies didn’t get too soggy while the stack cooked, I cooked down the peppers and onions in a large skillet for 4-5 minutes over medium-high heat with a drizzle of olive oil, salt, and pepper. By cooking them down first, some of the water cooks out!

Keep repeating your layers! The top layer should be the second crust that you didn’t pre-bake. I topped my final crust with all the toppings just to show off what fillings were on the inside.

This is a thing of beauty!

Bake this whole big stack at 350 degrees F. for about 15 minutes (20 minutes max) until the cheese is bubbling and the edges are crispy and browned.

I could barely wait to try this out!

When the pizza stack comes out, garnish it with some fresh oregano and let it cool for a minute before slicing into it. I was pretty scared that it would just fall apart but if you use a good serrated knife to slice it, it actually holds together really well!

It’s definitely and knife and fork eating situation though.

You could slice this pepperoni pizza stack into smaller pieces if you wanted to serve it as an appetizer. It’s a super-fun project that only takes about an hour and is really delicious.

Who doesn’t love a stacked recipe? This one is a keeper! 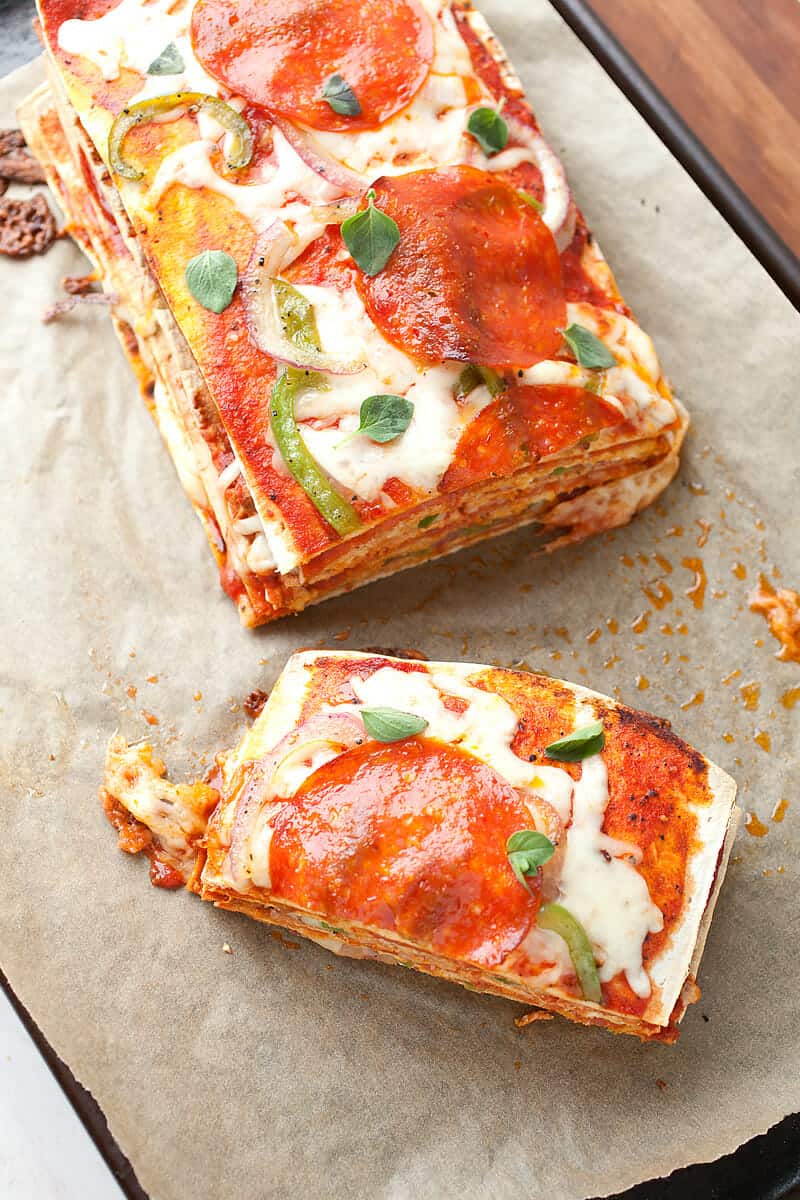