This post is brought to you by Sabra Dipping Co, LLC. They are promoting the joys of the #UnofficialMeal. Sometimes the best moments take place before dinner is served! Find great snack ideas and recipes on their website, Sabra.com.

In the very long list of things you worry about when you are having a kid, having a super-picky eater was somewhere on there for me. Obviously, it’s not at the top. You always just want a healthy and happy kid.

But, it’s the question I was most frequently asked and therefore it worked itself into my brain. “What if you have a picky eater kid?! What will you do?!”

Well, the truth is that the jury is still very much out on whether or not T will be a picky eater. Some days he eats everything and some days he only wants apple sauce. Turns out babies are flip-floppers.

But, when Sabra asked me to share with you all an Unofficial Meal (#UnofficialMeal) that happens at House Macheesmo, the first thing that came to mind was our happy hour taste tests!

These are my small way to introduce T to a ton of new flavors in a low key environment without the stress that comes sometimes at the dinner table (“EAT THE PEAS!!!”). Plus, they give me a chance to have him chill out while I work on actual dinner.

This isn’t something that we do everyday. But, a few times a week I make sure I have some easy things for the dude to snack on before dinner. Because I use this time to make actual dinner, it’s important that the items are stuff that require almost no prep.

It’s just stuff I can put out and he can go to town on it. Sabra hummus is a frequent item at our taste tests because A) he loves hummus and B) they make a lot of different flavors.

I just let him dig in with his hands because I think there’s something to feeling food. We can work on fork and spoon stuff at the dinner table, but during the taste tests it’s all hands only.

Plus, it’s cute and funny.

After many months of these taste tests, I think I know which things will be a hit with T, but there is almost always a surprise. On this particular day, I thought he would be into the green peppers because he likes red peppers.

Not so much though. He tried them once and never went back to them.

Oh well! So it goes!

I’m a firm believer that kids don’t love most foods the first time they try them. (Unless it’s cupcakes.) In fact, they don’t necessarily love them for many tries. This only gets worse if you are at the dinner table and trying to force your kid to eat something they don’t want.

I’ll be the first to admit that I’ve had a few nights where I made something delicious that I thought T would like and he would barely try it. I would get upset that he didn’t like it (which I realize is irrational because he is ONE). He would get angry because I was trying to force him to do something (because he is ONE). Nobody enjoys those dinners!

That’s why I love the taste tests so much!

There’s no stress. I just put a bunch of stuff out and if he tries it, cool. If he doesn’t, no big deal!

Usually, I’ll put out 2-3 things that he has had before, but I always try to include one thing that’s new to him as a challenge. The only limit I put on this is spicy food because he’s just too young to get it. (Obviously, you should check with your doctor or watch out for any possible allergies.)

On this particular day, our challenge food was CAPERS. I snapped this pic as he reached into the caper bowl!

Umm… he loved them. He ate an entire bowl of capers. By themselves. I couldn’t stop him!

Besides trying new foods, we use these Happy Hour Taste Tests to just decompress a bit from the day. We have fun! We listen to music (usually 90s hip hop – it’s his favorite), and we take selfies that sometimes involve face swaps!

Sorry. You won’t be able to un-see this.

I’m not really sure if T will be a picky eater or not, but so far he’s doing a great job at trying new foods and, more importantly, learning that food is fun not only because it tastes great, but because of who you share it with.

Here’s a fun graphic I brainstormed on some of the foods I’ve fed T during our happy hours over the months.

Save it and start your own Taste Test Happy Hours! 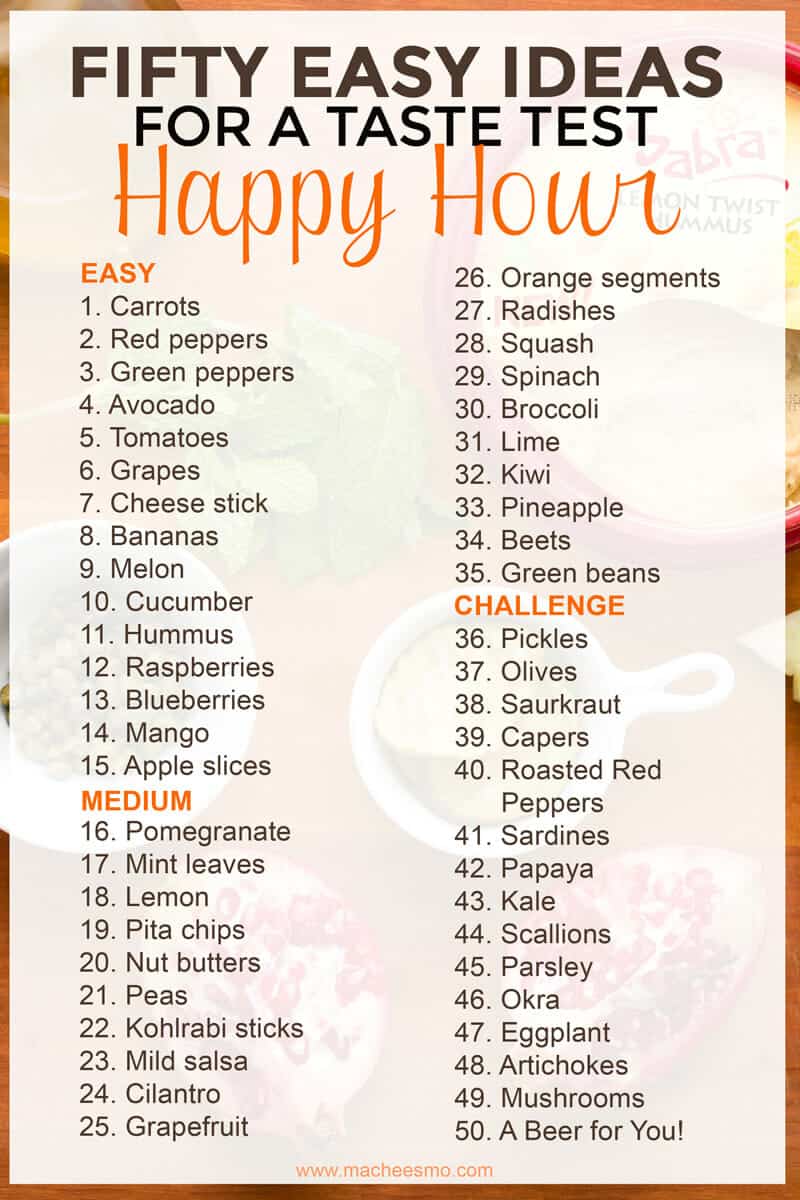 6 Responses to “Our Happy Hour Taste Tests” Leave a comment