Rule #1: Make sure your kids are wearing helmets for dinner. Safety First.

No but really, my little girl is quite opinionated on her helmet and there are some nights where she wants to wear it all the time and I have zero issue with that plan, especially if she insists on standing on a damn bar stool during dinner.

I spend a lot of time thinking about dinner time with kids. After all, I’m writing a column for Simply Recipes on exactly what it takes to get dinner on the table that kids actually eat. I think most parents would agree that it’s a constant brain struggle.

I’ve made a loose strategy though that seems to be working with our kids and so I thought it would be fun to share it and see what you all think!

Before I get to the rules, two disclaimers!

Disclaimer One: My daughter is a terrible eater right now. I’m the first to admit this. My son, who is two years older, is a great eater.

In fact, it’s so bad that recently when my daughter refused dinner my son actually sighed and said, “Oh no, not again!”

So yea, we have some work to do. But I do believe that we will get there.

Disclaimer Two: I break these rules all the time. They are in my mind, but parenting is hard and some nights you just have to make it to 8pm. Don’t be too hard on yourself or your kids during dinner.

Okie dokie! On to the rules!

I’m a firm believer in gentle nudges to correct behavior. I think there’s very little to be gained by forcing your kids to eat everything on their plate or trying to force them to like things. If one day, my son doesn’t want sweet potatoes (who knows why – sweet potatoes are delicious), then that’s fine. I don’t make a big deal of it.

I ask that he try the sweet potatoes, but I don’t make a pain point out of it.

I also try to talk through what he doesn’t like about them. Is it the flavor? The texture? Oh… so you don’t like mushy sweet potatoes but maybe you will like sweet potato fries?

Mentally though, I bookmark to make sweet potatoes the next week, and the next, and the next. Maybe I’ll make them in a slightly different way, but I keep exposing them to the thing they apparently don’t like.

Believe it or not, this actually works and my son has grown to be a very good eater through this strategy. He will try almost anything and likes most things because he’s been exposed to them over and over again.

This one is hard for me, but I know that it’s right. If you want to create healthy eaters, it doesn’t help to make certain foods reward foods because that makes it seem like the non-reward foods are somehow worse.

You have to eat this bad pasta if you want that good cake.

The better way to approach dessert is to announce before the meal if there is a dessert. Everybody will get some regardless.

Of course, there are limits. If my kids eat absolutely nothing, then I’m not going to be giving them a huge bowl of ice cream, but the goal with this rule is to not hold dessert on some sort of pinnacle. It’s just a part of a meal and can be a part of healthy, realistic eating.

Mentally, this one is very hard for me because I’m always personally slightly offended if my kids don’t swoon over my cooking and I want to PUNISH them for their poor tastes. But, I know it doesn’t help.

Having time as a family is a great way to make healthy eaters. It gives kids a chance to see what you are eating and you can talk about food along with things like your day! It creates routine.

Yes. That means we eat every night with the TV off.

Yes. That means we eat every night with our phones put away.

But, healthy eating doesn’t just mean the food you are eating, but the environment in which you are eating. Putting down the media for an hour every day should be doable.

What do you think?

If you are a parent, what do you struggle with when it comes to dinner time? Are your kids good eaters? What’s your secret?! Leave a comment! 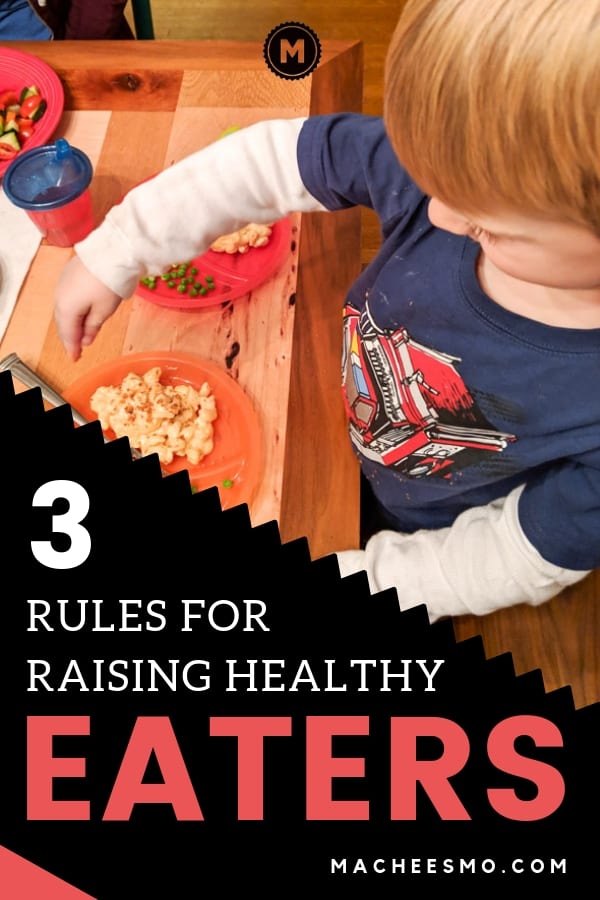