Now Reading My Battle Against "Best Ever"

My Battle Against “Best Ever”

I think everyone has their writing (or Internet) pet peeves. When it comes to recipes, mine is the phrase “best ever.” I’ve noticed that it’s being used more and more (and more) lately and every time I see it, it’s the recipe equivalent of nails on a chalkboard.

So, come with me while I try to describe why I dislike this phrase so much and why I think we should all agree to stop using it.

Why “Best Ever” is the Worst

I think we can all agree that the point of words is to convey meaning to the reader. If I call a recipe “easy,” most readers will have a general idea of what that means. It’s a helpful word. Maybe I could go further and call it a “45 minute” recipe. Now people know what they are getting, right?

What “Best Ever” Should Mean: This is literally the best version of this recipe ever created. I’ve tested them all and if you want to combine these ingredients and make this thing, this is the best way to do it.

There are times when maybe this is true. If you are Jiro, you can probably call some of your sushi (or your sushi rice) the best ever. Of course, he would never do that, but he could.

You could possibly also use this phrase if you have a super specific recipe. If you google your recipe and there are less than 10 results, then fine.

What “Best Ever” Actually Means: In today’s Internet Food world, “Best Ever” doesn’t mean anything other than CLICK ON ME. I see stuff like this on Pinterest everyday and it makes me want to punch a kitten.

What this person is saying is, “I really liked this recipe and I think you would too.” That’s a perfectly acceptable thing to express.

But, here’s the deal. If you are taking the time to write it down on the Internet, it’s assumed that you like your own recipe. If I don’t really like a recipe, I don’t post it.

As-is though, this is a completely meaningless title. No. It’s not the best ever chicken. I know it and YOU KNOW IT.

Instead of being descriptive, it’s just lazy writing. Let’s do better.

A History of “Best Ever”

That said, it has been used with recipes since the beginning of the internet. BUT, I think I can track down it’s insane popularity to a single recipe from 2007. It’s a Lasagna recipe posted by The Pioneer Woman and yes, she describes it as you-know-what. While there were best-ever recipes before this one, because of her popularity, I think this was a turning point.

Here’s the thing about this recipe. I LOVE IT! I’ve made it multiple times. It’s a really great lasagna recipe. But, for starters, it doesn’t use homemade pasta so I can tell you it can be improved just with that one change.

But, I think Ree knows this. She was trying to be funny and light-hearted. She had no idea that she would set in motion a world in which one out of every five recipes is proclaimed the BEST EVER.

The Escalation of “Best Ever”

What started out as a light-hearted phrase to express love has turned into a word-vomit avalanche. There are blogs now where every third recipe is titled the best ever ____. If you search for a recipe on Pinterest, it’s a guarantee you’ll see more than one best-ever version.

Do you know how annoying it is to scroll through a list of recipes that are all called “BEST EVER?” I’m sure you do because you use the Internet, but it drives me to drinking (more).

I tried to ignore this trend for many years, but now I see it drifting into the mainstream. Bon Appetit, a publication I love, recently printed a recipe (which I paid my actual dollars for) called Best Ever Grilled Cheese. Here it is! It uses mayo instead of butter and American cheese. REVOLUTIONARY!

It only got 3.5 stars from readers though and since it’s the best ever, grilled cheeses must be terrible.

If anyone from Bon Appetit reads this, please stop using this phrase. The more I see it, the more I want to use your beautiful publication to line my cat’s litter box. Here, I’ll do some work for you. Here are four great titles you could’ve used for that same sandwich:

Of course, the reason why people (and publications) are using this title is because people are clicking on it. But that leads to a cold war escalation of “best ever.” Everybody is sticking the phrase on every recipe in hopes that it’ll encourage clicks, but forgetting that the purpose of a title is to say something about the recipe.

He Who Throws Stones

I’ve written a lot of recipes over the years and it’s possible that I’ve used this phrase. I can’t find an example of it on Macheesmo, but it’s possible. What I can promise though is that I’ve used words that annoy people and that are lazy descriptors!

If I start to look through my archives with a critical eye, there are tons of examples with phrases that could be the next “best ever.”

I know that it’s tough to come up with recipe titles and I don’t hold it against the recipe writers who do this. I won’t unsubscribe from your site because you use it. Heck, I might even make the recipe!

But, I think we can all agree that it’s lazy writing and the world would be a better place if every recipe writer describes their recipes helpfully instead of with fluff.

It’s something I still work on!

Okay. I’ve written over 1,000 words about this silly phrase. Is this the BEST EVER POST against the phrase “best ever?”

Agree with me? Here’s a banner to pin to combat the best evers! 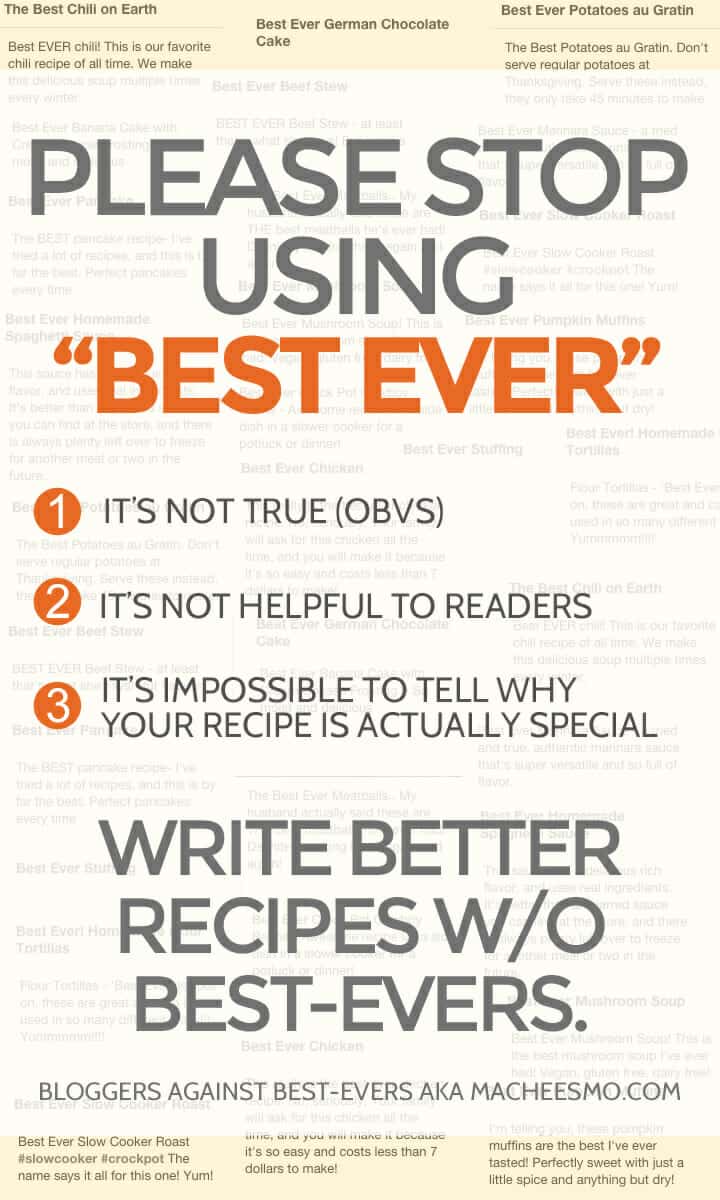 15 Responses to “My Battle Against “Best Ever”” Leave a comment