Let me just get this out of the way because I’m sure someone will email me almost immediately: I know this isn’t a traditional torta.

Tortas, if you aren’t privy to them, are large Mexican sandwiches that are usually meat filled and eaten for lunch or dinner. They can have a variety of toppings, but the toppings I used here are probably not on the long list of options you’ll find at most torta shops.

But the thing is, this sandwich just felt like a torta to me. I could have called it a breakfast sandwich or a panini, but it’s a damn torta. It’s packed with hefty fillings, melty cheese, and salted avocado. The bread that holds the whole thing together is crackly and charred in places.

I wrapped the finished Vegetarian Torta in foil because that’s what you do with a torta.

A vegetarian take on the classic breakfast torta that is made with sauteed mushrooms, eggs, and lots of cheese.

1) Chop mushrooms into slices. In a medium skillet, melt butter over medium heat. Then add sliced mushrooms and season with a pinch of salt. Cook until mushrooms lose their moisture and start to brown, about 8 minutes. At the end of cooking, hit mushrooms with a dash of hot sauce.

2) Scoop out mushrooms and set aside. Wipe out skillet and add another small dab of butter. Once melted, add eggs and let cook until there is a thin liquid layer on top. Flip eggs or roll into an omelet. Let cook through for 30 seconds.

3) Prep other toppings and panini press. If you don’t have a press, you can use two heavy oven-safe pans to press the sandwiches in a 350 degree oven.

4) Prep sandwiches by cutting them in half and hollowing out each half a bit. Add the eggs to one half and then mashed avocado to the top half. Top eggs with mushrooms and cheeses. Cover with the top half of each sandwich.

Cut sandwiches in half, wrap in foil to keep them warm,and serve immediately!

Most tortas are meat packed. I swear I’ve had some with a pound of shredded meat on them. It can get a little crazy. I wanted to keep this vegetarian so I went with mushrooms which I knew would give some heft to the sandwich without being out-of-this-world heavy.

I sliced my mushrooms pretty thick and then sauteed them in some butter (or olive oil) over medium heat until they browned and withered a bit. At the end of the saute I hit them with some hot sauce because that seemed like the right thing to do.

You’ll need these things too if you want to make this Vegetarian Torta. For the avocado, I just mashed up 1/2 avocado per sandwich and seasoned it with some salt. I used two kinds of cheese: monterey jack and crumbled Cotija.

The egg is necessary because it’s a breakfast torta.

When the mushrooms are done cooking scoop them out of the skillet, wipe it down, add another small dab of butter or drizzle of oil and add the scrambled eggs. Let them cook until there is a very slight layer of liquid egg on top and then fold the egg over to finish cooking. Essentially this is a basic omelet but we are gonna stuff it in the sandwich.

The Bread and the Press

Traditional tortas are on these large round rolls. If you can find those, cool, but otherwise you can just use a large sub roll. I think it helps to hollow out the bread a bit so there are little wells on both sides for the ingredients.

On one half I stuffed in my eggs and on the other half I spread on the avocado.

Then I piled on those cooked mushrooms!

Add the cheeses and smash the top on the sandwich.

Now, if you have a panini press, your breakfast is damn near done. Just slide it in the press, cook it until it’s crispy on the outside and melted in the middle.

If you don’t have a press (I don’t) then you’ll have to get a bit creative. It’s important to apply both heat and pressure to make this Vegetarian Torta work so the best way to do that is to preheat two cast iron skillets in a 350 degree F. oven. Then you can sandwich the torta between the two skillets.

I recommend using some foil to make sure the sandwich stays clean.

Cook this in the oven like this for about 10-12 minutes. 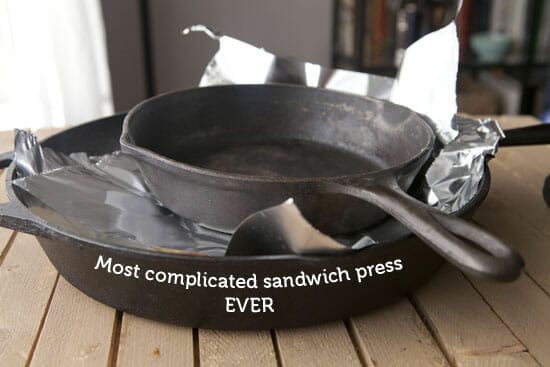 It looks a bit messy when you peel it off, but trust me, it’s doing good things.

However you cook the Vegetarian Torta, chop it in half and eat it while warm. I think it helps to wrap both halves in foil to keep the heat and fillings contained.

This Vegetarian Torta is one of the better breakfast things I’ve made in a while. It’s totally worth the work if you like things like cheese, avocados, and crispy bread.