When people ask me about Macheesmo, one of the first questions I get asked is how I don’t weigh approximately 400 pounds. I think I’ll save my philosophy on healthy eating for another post, but regularly eating veggie-heavy recipes like this Creamy Mushroom Barley Soup is a good start.

I try to post delicious and interesting things on Macheesmo (savory french toast anybody?) But, this vegetarian barley soup was both delicious and healthy so it was a must-post recipe for me.

The mushrooms and barley in this recipe produce a very filling soup, and while many barley soups feature beef, I like the vegetarian version actually. I definitely don’t miss meat when I’m eating it. Everything has a great texture to it and tons of flavor. Plus barley is hugely underrated so it’s worth posting on. I think you can find it boxed in the cereal section or definitely loose in the grain section.

This creamy vegetarian mushroom barley soup is packed full of whole grains and veggies in a creamy (but not too heavy) soup. It’s a perfect bowl of soup for a cold winter day!

1) In a medium pot, add the barley along with 1 1/2 cups chicken stock. Bring to a simmer, cover, and simmer over low heat until barley is tender, about 25 minutes. Remove from heat and fluff with a fork.

2) In a larger pot, melt butter over medium heat. Add mushrooms and a pinch of salt. Cook until mushrooms lose their liquid and start to brown a bit, maybe 6-7 minutes.

3) Stir in onions, carrots, and celery and cook for another 4-5 minutes until veggies soften. Season with another pinch of salt and pepper.

4) Add flour to the veggies and stir in. Cook the flour and veggies for a minute or two to cook off any flour taste. The flour should turn a light tan color.

5) Slowly stir in the remaining chicken stock (2 1/2 cups) and bring to a slight simmer over medium heat. Cover and simmer for 7-8 minutes to meld flavors and thicken soup slightly.

6) Stir in cooked barley. Remove from heat and stir in sour cream. Taste and season to your liking.

How to Make Barley Soup

I’m a fan of cooking the barley separately for this soup. It ensures your barley is cooked and that it doesn’t soak up all the liquid for the soup. Just simmer about 1/2 cup of barley in 1 1/2 cups chicken stock over low heat until it’s tender. It’ll take about 25 minutes or so. You can do it while you are cooking the rest of the barley soup.

If you want to speed up the prep on this mushroom barley soup, you can do all of your slicing before hand which would make this almost a thirty minute meal I think!

Start the barley soup recipe by melting some butter in a large pot and adding the mushrooms. Cook these until they lose their liquid and start to brown a bit around the edges.

Then you can add your other veggies!

Cook the veggies for a few minutes before you move to the next step! A pinch of salt and pepper at this point wouldn’t hurt.

Add some flour to the veggies to form a roux. This will thicken the soup a bit and give it a creamy texture. Stir the flour into the veggies for a minute or two to cook out any flour taste. Then you can slowly stir in the liquid.

Simmer that for 6-7 minutes until the veggies are tender and the soup thickens slightly. Then add the cooked barley to the soup!

Make sure to add your sour cream last off the heat. Not a great idea to simmer sour cream. It might break apart a bit, but don’t worry about it! Taste the barley soup for salt and pepper and serve with fresh chives!

Can you Cook this Barley Soup in a Slow Cooker?

If you’re using a slow cooker, I would add everything to the slow cooker at once (not the flour) and cook on high for 4 hours or low for at least 6 hours. Right before serving, I would recommend stirring in a slurry of 1 tablespoon cornstarch and 1 tablespoon water to thicken the barley soup a bit and then add the sour cream as well.

The soup is pretty doable though if you chop your stuff in advance!

If you’re looking for a filling and delicious vegetarian soup to try, try this creamy mushroom barley soup recipe! 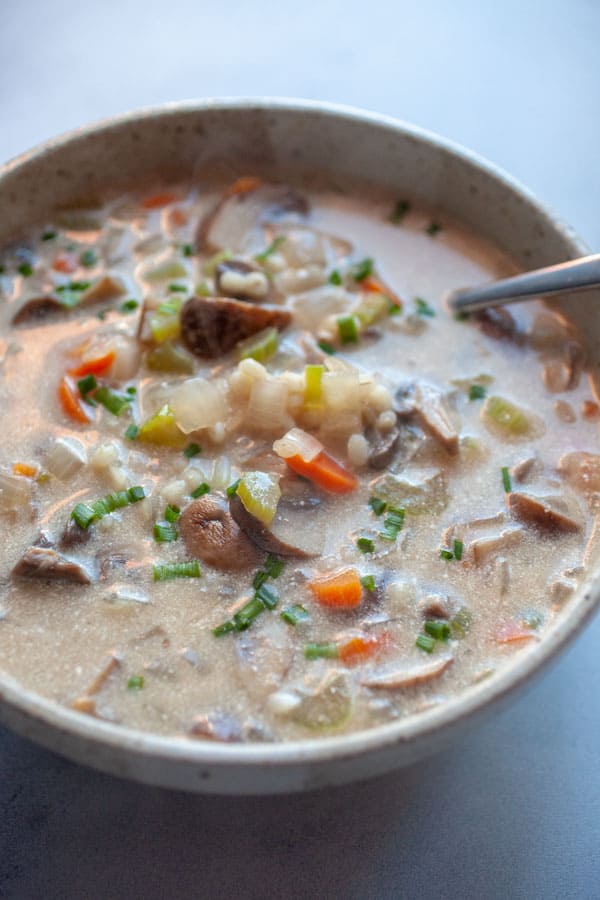 Here are a few other great vegetarian soup recipes!