I don’t watch cooking shows any more. I’ve gotten pretty bored with the ‘stand-n-stir’ format and even though there are many chefs who I love to watch, I just don’t love the format.

The one exception to this is a new show with chef Matty Matheson that’s only available, as far as I can tell, on Youtube, on the Munchies Channel. I hadn’t heard of Matty before his big ‘ole smiling face popped up on my Youtube feed one day. The first time I watched one of his cooking shows I honestly thought it was a prank or something. Like… is this guy for real?

Welp, now I’ve watched them all and will pretty much stop what I’m doing and check out any new Matty Matheson situation. His personality is infectious (in a good way) and he makes cooking really approachable.

Case in point. THIS HASH. It’s truly a work of art, but it’s also just a work of hash. Like… don’t overthink it.

When I saw this video, I had to stop what I was doing and make this sucker. It was spot on and, I thought, worth sharing. Plus, it’s the perfect opportunity to introduce all of you to my latest man/chef/Youtube crush, Matty Matheson. 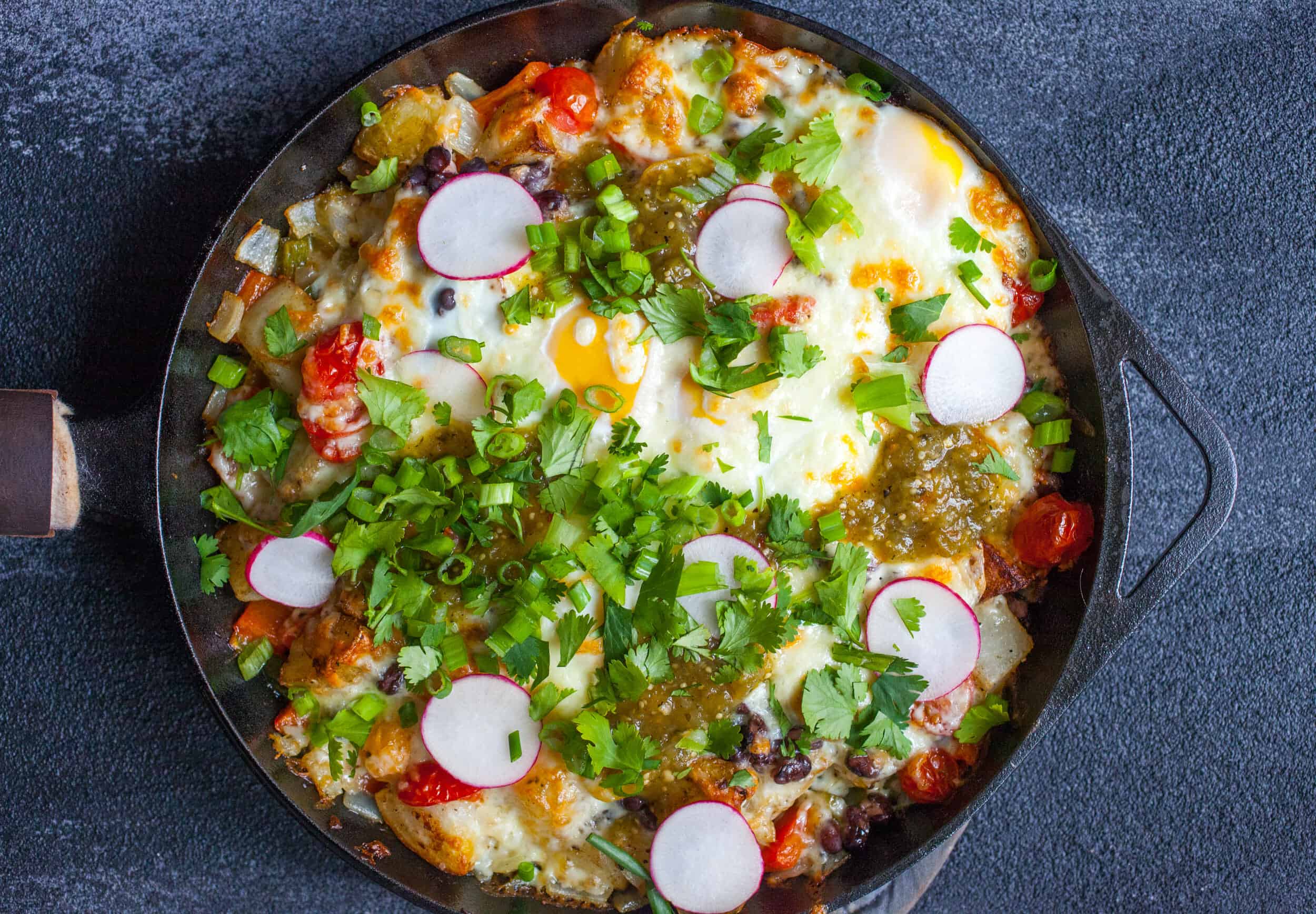 Recipe from a Matty Matheson recipe.

I’ll do my normal walkthrough with photos on this sucker, but honestly, it’s worth taking a few minutes to watch the original video.

I tried to really embody Matty here and not overthink this thing. It’s a hash after all. I cubed some potatoes and tossed them in a skillet with some oil, salt, and pepper.

Don’t cook them over high heat. They will burn before they actually cook (if that makes sense). Instead a nice medium-ish heat will do the trick. They should be tender, but crispy in parts.

For everything else in this hash, I like to leave the ingredients on the chunky side. There’s no reason to strive for a perfectly even dice here. Just chop it up and get it in the pan.

Once the peppers and onions cook a bit, add the potatoes back in and toss together.

Now for the fun part, getting this ready for the oven. Add some pockets of black beans, grape tomatoes, and about four eggs. Ideally, your eggs will be even around the skillet, but mine all kind of slid to one side and I didn’t freak out about it because it’s a hash.

Then some cheese. I might’ve used a bit too much.

Bake this beauty at 425 degrees F. for about 10 minutes. The original called for 15 minutes but I found that that long overcooked my eggs. Maybe though, just check them after 10 and if they need longer then stick them back in.

The result is a wonderful thing, but it needs some color.

On goes sliced radishes, spoonfuls of salsa verde, and big handfuls of cilantro and scallion.

The flavor combo is solid and it’s a no-frills dish that I’d serve literally anybody who walked in my door.