Next week is one of my favorite strange holidays of the year, Cinco de Mayo! If you haven’t read the history of this holiday, it’s super-weird. I always thought it had something to do with Mexican independence, but no.

Officially, it gets its date from a battle between the French and the Mexican armies in 1862, but in reality, it’s basically an American-made holiday.

It’s one of my favorite holidays though because it gives me a solid excuse to make really good margaritas and eat Tex-Mex without abandon.

These Margarita Shrimp Tacos combine both of those things into one delicious dish. (Also, if you want to make a killer Marg, check out my perfect margarita recipe!)

Great tacos for a quick dinner. Especially good for cinco de mayo! The shrimp are quickly marinated in margarita ingredients!

1) Clean shrimp by removing shell and slicing down the back of the shrimp with a small knife, washing out any dirt or crud in the vein.

3) While shrimp marinate, prepare other toppings.

4) Drain shrimp.  It’s fine if some cilantro and pepper stick to the shrimp.

5) Heat butter or oil in a large skillet over medium-high heat.  Once hot, add the shrimp.

6) Cook for 2 minutes per side until shrimps are slightly pink and firm.

7) Roughly chop shrimp and serve in tacos with fixings.

Since I live in a landlocked state, I don’t mind using frozen shrimp on the rare occasion I want to make something shrimpy. These days you can get very good quality frozen shrimp.

For this recipe, I definitely wouldn’t recommend the cheap small ones. You want nice big, meaty shrimp.

I can clean a pound of shrimp in a few minutes without a problem.

Once your shrimp is cleaned, add in the marinade ingredients. I added everything to a bowl, but you could also seal everything in a plastic bag. Don’t forget the peppers in the marinade. They give just enough heat to the shrimp.

The key thing to remember about the shrimp is you don’t want to let them marinate for more than 20 minutes or so. If you do, the shrimp will actually cook completely in the citrus juice, kind of like when you make ceviche.

15-20 minutes of marinating time is plenty for the shrimp. The marinade is really strong and shrimp have a pretty light flavor so you don’t want to overpower them completely.

While the shrimp marinate you can prep the other ingredients. I made a quick guacamole, chopped up some lettuce and cilantro, and crumbled some Cotija cheese for my tacos.

When you’re ready to cook the shrimp, drain off all the marinade. It’s totally fine if cilantro and Serrano is sticking to the shrimp as it cooks. Consider it extra flavor.

When you’re ready to cook, add some butter to your pan over medium-high heat. Then toss in the shrimp and cook them for about 2 minutes per side.

They should turn nice and pink.

When the shrimp are done, you could definitely stick them in some tacos just like that.

I think you know the story from here. Pile a spoonful or two of shrimp in a tortilla with some Cotija cheese, salsa, guacamole, lettuce, and cilantro.

If you’re looking for a quick Cinco de Mayo dish, look no further than the stuff you already have around (margaritas).

This dish is so quick and tasty it’ll give you plenty of time to remember why we celebrate Cinco de Mayo. Namely, because something random happened many years ago on that date.

And because margaritas are good. 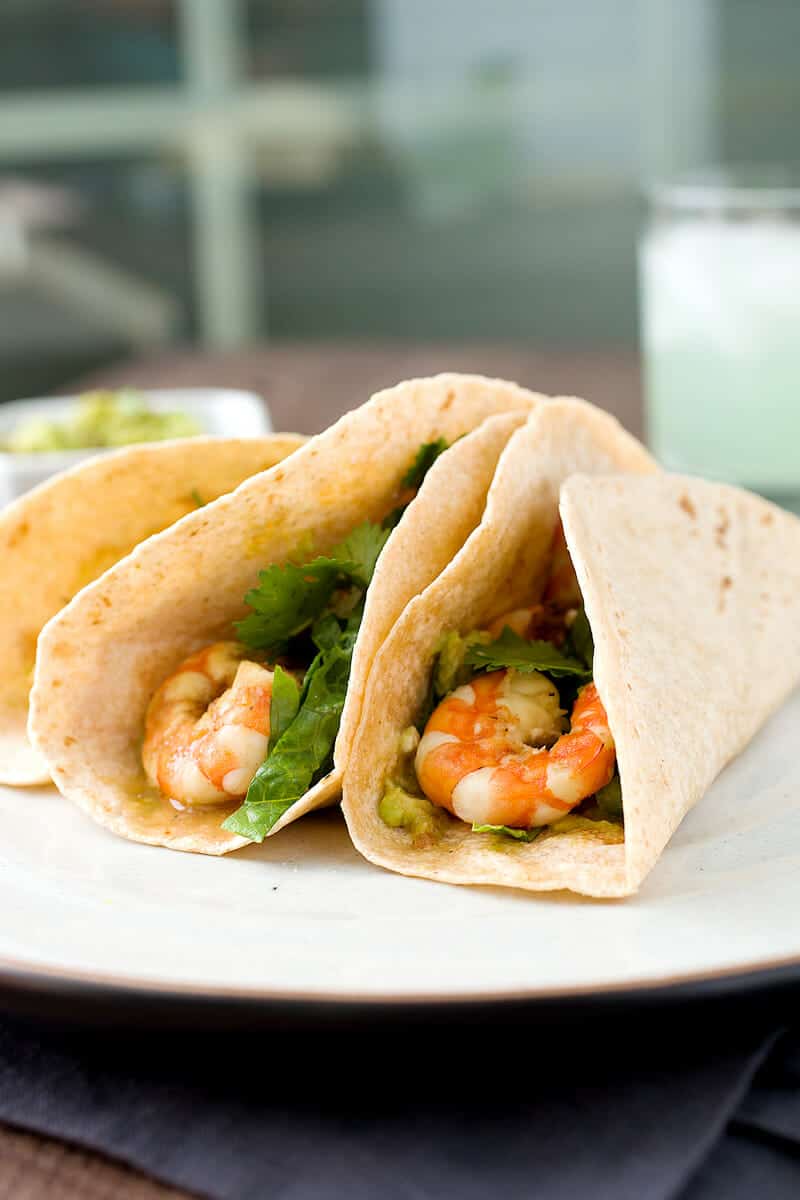