Roast chicken is one of the first things I tell budding home cooks to get comfortable with. It isn’t as hard as it may seem to make a really delicious one, but roasting a chicken can take 60-75 minutes which can be a bit of a stretch. It can also tough to cook the chicken evenly without drying out parts of it.

Enter the spatchcock chicken! The idea with this is that by flattening the chicken, it will roast faster and also cook more evenly. One caveat: You have to flatten a chicken! So, there is a bit more work on the front end of this recipe, but you can do that part in advance and it trims probably around 30 minutes off the roasting time.

If you get comfortable with this method, you can do this all on the grill as well for a fun early grilling season option, but the oven is much easier to control and if it’s your first spatchcock chicken, I’d recommend starting there!

This is a simple and faster way to make a roast chicken. It has easy-to-find herbs and spices and you bake the whole meal at once!

Okay, let’s get the nitty-gritty part out of the way. The only true way to spatchcock a chicken is to take some kitchen shears and cut out the backbone of the chicken. Then it will lay flat. You can save the backbone in the freezer for chicken stock!

Once your chicken is flattened, rub it with some olive oil and season it liberally with lemon pepper and kosher salt. You want a pretty even layer over the entire chicken.

I’d recommend prepping the chicken up to this point in advance if possible. The chicken will be seasoned better if it sits like this overnight. Plus, it will make your cooking time easier if it’s done in advance!

You could just roast the chicken like this, but I recommend mixing up some hearty veggies to roast while the chicken is roasting. Might as well round out the meal!

I added some garlic cloves to the veggies but found they didn’t add much so left them out from the actual recipe.

Stick this in a 400 degree F. oven for 15 minutes and then you can remove the cast iron skillet and the foil. This basically just encourages browning on the chicken since it’s roasting for a shorter time period.

Once the skillet is off, the chicken will probably need another 30 minutes of roasting time to finish up. Ultimately, use a meat thermometer to make sure it reaches a safe temperature of 165 degrees F. in the thickest part of the thigh and breast.

Let the chicken rest for a few minutes before slicing and serving! 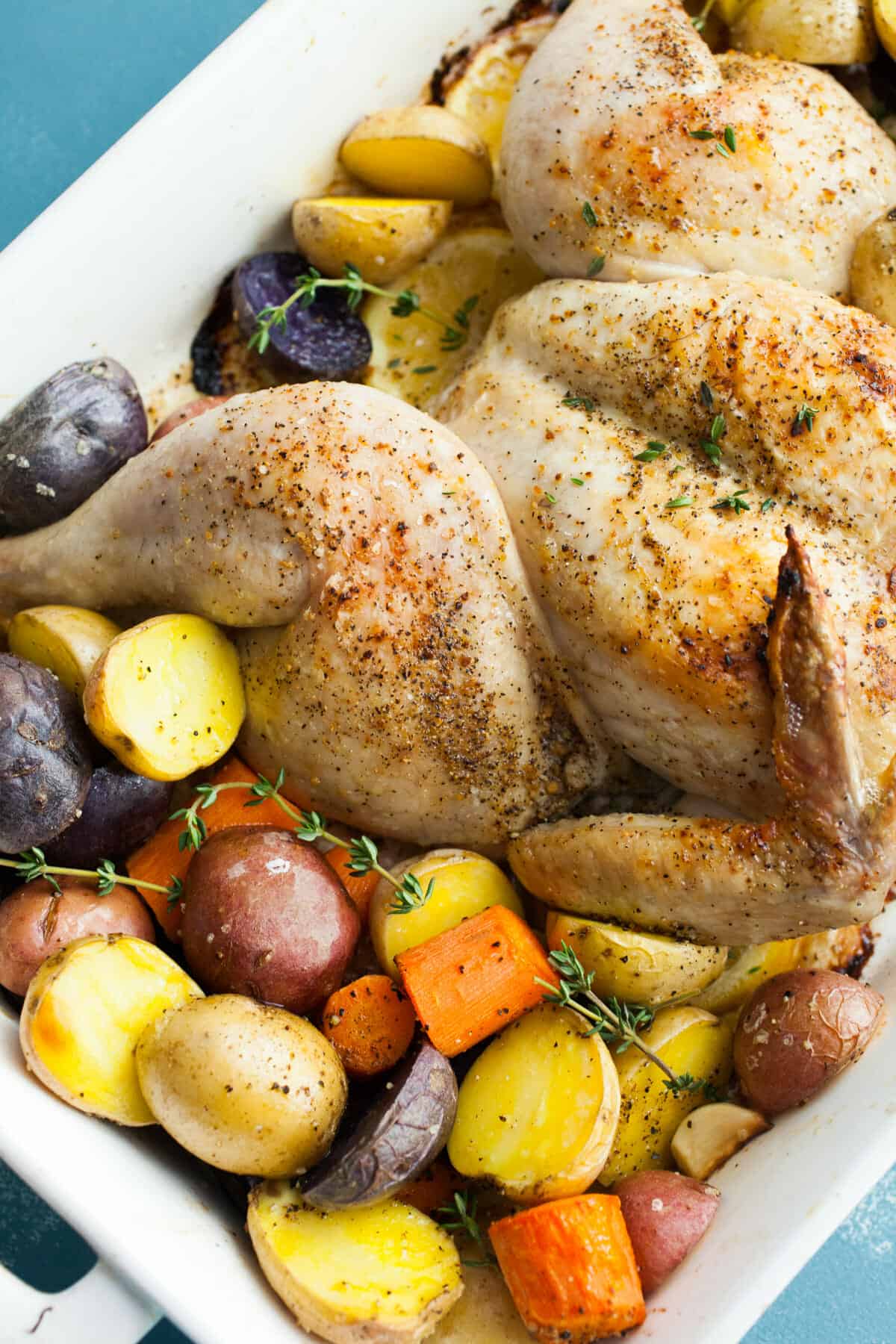