When you hear “steak sandwich” you might be thinking something that’s super heavy like they make in the great city of Philadelphia. Sure, I’ll never turn down one of those beauties, but when it’s really hot out in the summer I want a sandwich that is crisp and light.

These Korean steak sandwiches are everything. Filling, flavorful, but still light enough to eat on a hot day. The steak is perfectly seasoned with a Korean chili marinade and can either be grilled or pan-seared. Add the sliced steak to a good roll with spicy mayo and a spicy crunchy veggie salad and sink your teeth in!

You can serve the steak warm or chilled actually on the sandwiches. Either way is delicious and makes for a great lunch or dinner option. Usually I’m a fan of some sort of cheese on a sandwich, but didn’t miss it on these bad boys.

Slighty spicy and sweet flank steak sliced thin and stuffed in a roll with spicy mayo and a crunchy veggie salad.

1) Whisk together soy sauce, gojuchang, rice vinegar, lime juice, and honey in a large bowl. Add flank steak and coat well. Let marinate for at least 30 minutes or you can make well in advance.

4) Make sandwiches by smearing on some spicy mayo and adding a bed of crunchy veggies. Top with a few slices of steak (or chop the steak depending on the texture you like). Add sesame seeds if you want and serve!

The only thing you need to cook for these delicious sandwiches is the steak!

Flank steak works best in my opinion but you could use a wide range of cuts.

Mix together the marinade ingredients in a large bowl and add the steak. Let this sit for at least 30 minutes but you could make it well in advance also.

You can either cook the steak on the grill or in a pan. If you want to grill it, just grill it over medium-high heat for 5-6 minutes per side and baste the steak with the marinade as it grills. The steak should reach about 140 degrees F. in the thickest part when it’s done.

This time around though I decided to cook mine in a skillet. If you want to do that, just heat a large cast iron (oven safe) skillet over medium-high heat. Then sear the steak for about 4 minutes per side.

Again, I spooned over extra marinade as it cooked which forms a nice glaze on the steak. Once the steak is seared on both sides, transfer it to a 350 degree F. oven to slowly roast and finish cooking.

5-6 minutes in the oven should get you to the ideal temperature.

Whether you grill or pan-sear the steak, when it’s done wrap it tightly in foil and let it rest for 10 minutes. Then slice it thinly across the grain.

This is ready for sandwiches!

Serving note: This steak is also fantastic served over rice with some veggies!

In a separate bowl, stir together some sprouts, cucumber, red chili, and red onion. Scrape the seeds out of the cucumber and cut it into thin strips.

This is a really nice sandwich addition. Adds tons of crunchy and freshness to the sandwich.

You know the rest of the deal from here. Take a good roll and smear on some mayo. Then top with some crunchy veggies, a few slices of steak, and some sesame seeds.

The sesame seeds are optional, but add some extra crunch.

These Korean steak sandwiches are so much fun to make and perfect for a lazy summer meal.

Want to remember the pieces? 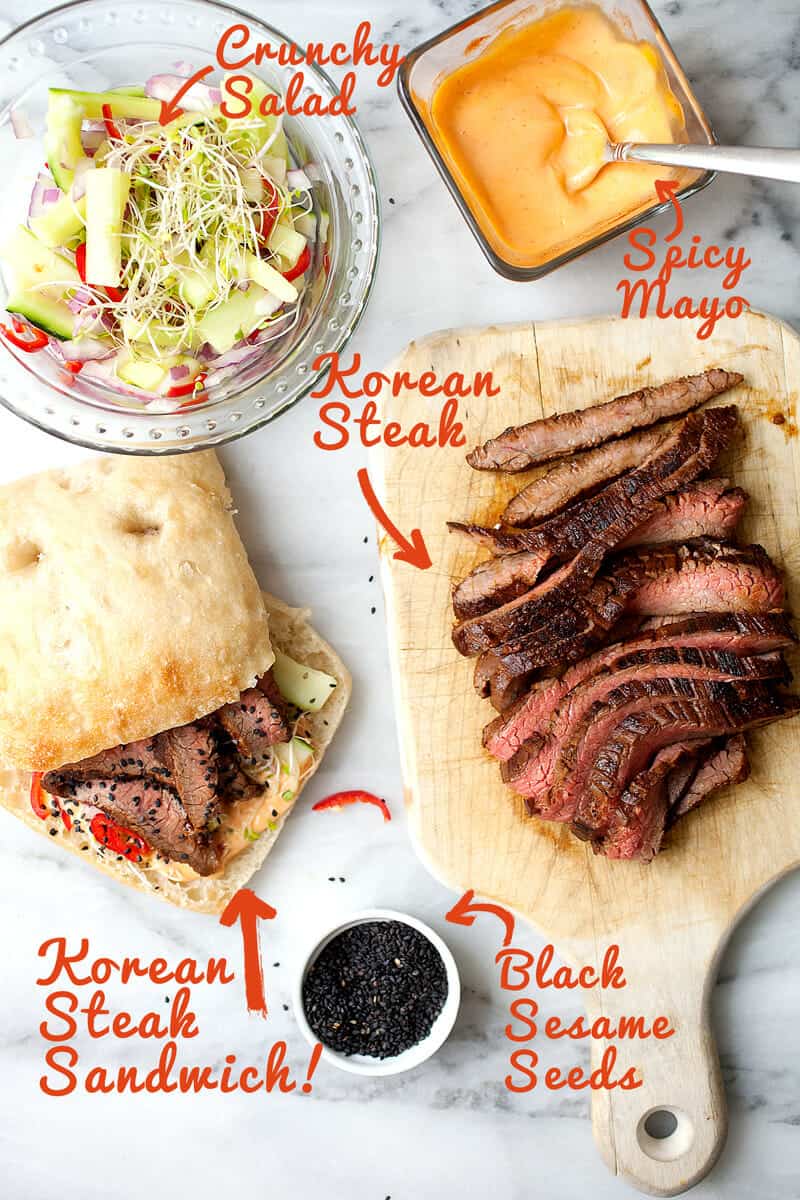