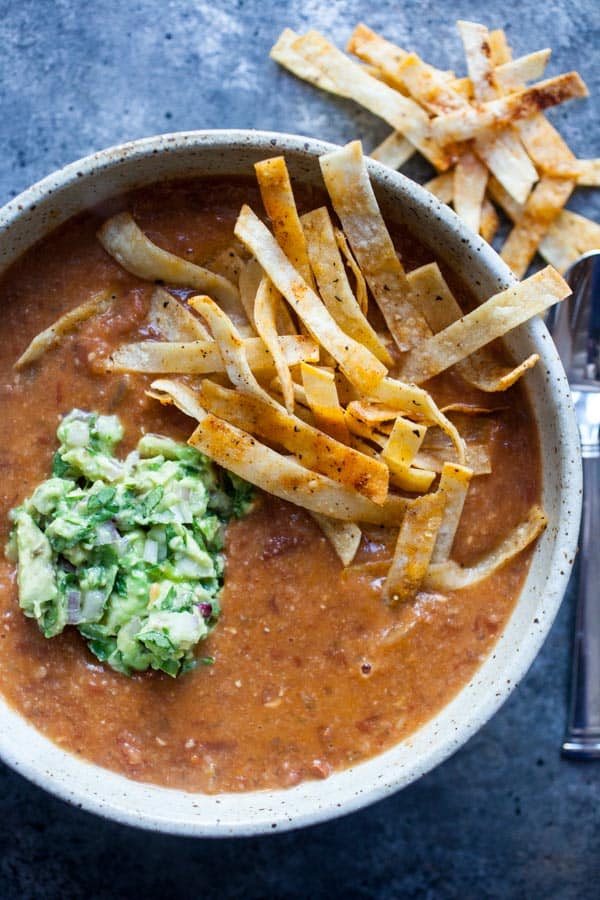 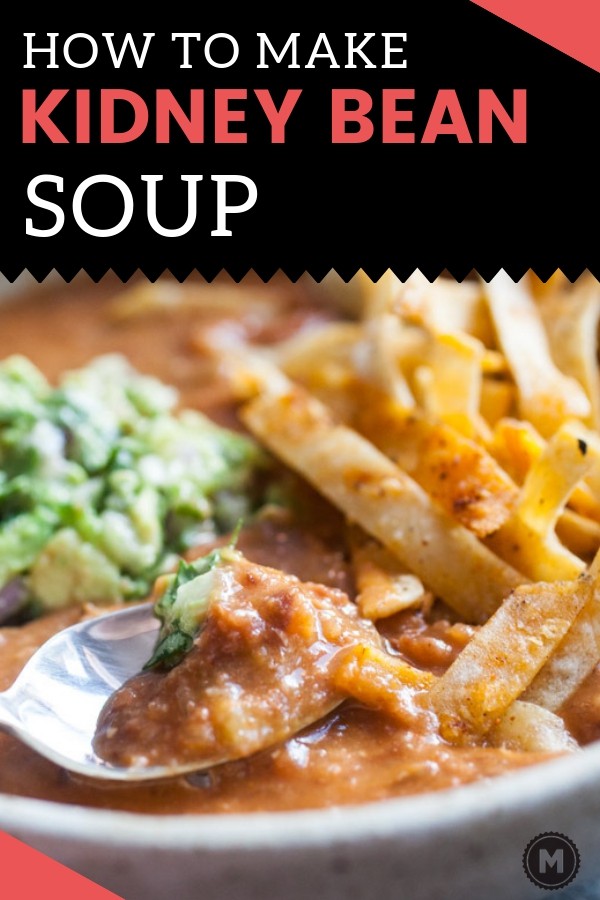 In the dead of winter, there’s nothing like a nice bowl of hearty soup to warm you up and this Kidney Bean Soup is one of my favorites. It’s healthy, hearty, and has great Tex-Mex flavors.

Usually I will default to black beans for my bean soup needs or do a mix like this 13 Bean Veggie Chili. But there’s something wonderful about going all-in with the red kidney beans for a soup recipe. They are really earthy and almost meaty. Topped with some guacamole and tortilla chips, it’s a great meal!

I followed my normal rule for soups on this recipe, which is to double it and I ended up with enough kidney bean soup to feed our family into next year. So maybe there’s no need to double this one unless you are a family of at least four, unless you have a lot of spare empty containers and freezer space.

How to Make Kidney Bean Soup

The original recipe actually called for canned beans, but I figured dried would be better. The important thing to remember about dried beans, especially if you buy them in bulk, is to lay them out on a flat surface and go through them.

It’s not uncommon to find rocks in your beans and no amount of cooking would’ve softened them up.

Soak the dried beans overnight in cold water using about 3 cups of water per cup of beans. The water should definitely cover the beans as they will soak up a lot of water throughout the night. (Most bags of beans will also have quick soak instructions which involve bringing liquid to a boil and then removing from heat and letting beans soak in hot water for about an hour).

When you’re ready to cook them, drain the beans and rinse them. Then add them to a large pot and cover the beans with fresh water until the water is about 1 to 2 inches above the beans.

Bring them to a boil and then let them simmer for about 90 minutes or until they are very tender. If a lot of foam forms on the top, just skim it off with a spoon.

The other ingredients for kidney bean soup are pretty simple. Some onions, garlic, a pepper or two and loads of spices.

Once your kidney beans are cooked, let them cool a bit and then strain them. For the liquid for this soup, some sort of homemade stock is best. I usually use a mix of stock and water for my liquid.

This soup is almost vegan by default which is nice. Just make sure you use a great vegetable stock instead of chicken stock or something similar and you are good to go!

There a lot of onions in this soup and we need to soften them up. Start by adding your oil to a large heavy pan and once it’s hot, add all your onions. Stir regularly until they soften and cook down. You don’t want to caramelize them, but just soften them. I’d say about 15 minutes should do the trick. Then add your pepper and garlic and cook for another minute.

Then add all your spices at once! Stir it well to combine. The onions will take on an amazing red color mainly due to the paprika.

Next add your beans, chopped tomatoes, and tomato paste to the party and stir well to combine. Let these cook just for a minute or two.

Once your beans are combined, add all your liquid to the pot, stir, and bring it to a simmer. Simmer the soup, covered, for about 30 minutes and then remove it from the heat.

I guess theoretically you could serve it like this and it would be more of a bean stew than a legit soup. I think it’s a good idea to blend it up with your blender of choice. If you’re using a stand blender, just be sure to cool your soup a bit or you’ll have hot soup flying all over the place.

Or, if you have one, you can use my new best friend the emersion blender.

After it’s smooth, return it to the heat and let it simmer for another minute or two just to warm up and get all the flavors combined. Taste it for salt and pepper and serve it up!

How to make the Guacamole Salsa

The recipe called for a quick guacamole to use as a topping. It was great with the soup. The key is to make it chunkier than a normal guacamole.

I also made some quick tortilla strips as well to add some crunch to the soup. I just sliced up about six corn tortillas and tossed them with a little olive oil, chili powder, salt, and pepper and baked them until they got crispy, about 15 minutes.

You could also just add a few tortilla chips to the soup. They add a great crunch to the soup.

The soup itself is spicy but not crazy spicy. Just a nice gentle heat. But it does have tons of flavor from the cumin and veggies and everything.

There is nothing not to love about this hearty red kidney bean soup. Give it a shot!

Here are a few other great soup recipes!