I hope you got a chance to watch Elisha, from Rebel Grain, on Food Fighters last night!

She is such a rock star.

We have became pretty close blogger buddies over the last few months while we waited for Food Fighters to air. She sent me a copy of her new ecookbook, The Quinoa Habit, and I wanted to make something out of it and giveaway a few copies!

This Kale Quinoa Salad salad caught my eye for a number of reasons, but mostly just because it featured a wonderful looking dressing and crunchy vegetables like corn and peas that are super seasonal right now.

A simple and flavorful Asian quinoa salad from The Quinoa Habit. Perfect for a side dish or lunches!

Recipe from The Quinoa Habit.

I like The Quinoa Habit because, well, I like quinoa, but also because it kind of uses the Love your Leftovers method of making a big batch of something (quinoa in this case) and then using it to supplement meals and recipes throughout the week.

To make this Kale Quinoa Salad though, I just cooked up a batch of tri-color quinoa. There are some good tips on cooking quinoa in the book. Sometimes I add too much water to mine and it ends up being sticky rather than fluffy.

This version turned out great though and was light and fluffy!

The original recipe called for frozen peas which are nice to use any time of the year, but since it’s summer now, I substituted a big handful of snap peas that I just snipped the ends off of and blanched for a minute in lightly salted, simmering water.

Preparing your vegetables while the quinoa cooks is always a good idea. I blanched the corn quickly in boiling water also and then cut it off the cob. I chopped my peas in half, grated a carrot, and roughly diced the other ingredients!

My favorite part about this Kale Quinoa Salad recipe is the dressing. It’s packed with sesame flavors and a little sweetness from some honey. It goes great with the crunchy vegetables.

If you want to start conservatively, you could add half the dressing, but I wanted all of it, for sure.

The best takeaway I learned from this recipe solved a problem I always have with quinoa salad which is quinoa clumping!

By drizzling the vegetables with the dressing and tossing that together and then folding in the quinoa last, you get a really well-distributed salad with no big lumps of quinoa.

Doing stuff in the right order really does help sometimes!

I ate about half of this Kale Quinoa Salad right away with a big old spoon, but the rest of it saved perfectly for the next few days and I snacked on it for lunch.

Elisha was nice enough to offer to giveaway a few copies of the book. The ebook is available in the ibookstore or you can also snag an easy-to-read PDF copy. 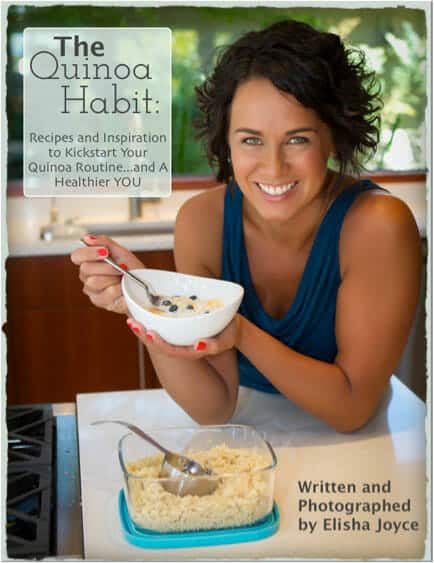 If you want to be entered to win a free copy, just leave a comment with your favorite quinoa recipe! I’ll pick two winners on Monday, August 4th!

64 Responses to “Asian Quinoa Salad + A Giveaway!” Leave a comment