Let me tell you what I have planned for the weekend. I’m going to go on a long run assuming the weather stays decent. I’m shooting for five miles outside which is the longest run I’ve tried since my ACL injury. Fingers crossed.

Then I’m going to immediately counteract the health benefits of said run by making some excellent game day snacks (wings for sure), having a few beers, and watching football all weekend. Obviously, living in Denver, the Broncos game is of most importance against the San Diego Chargers.

I actually was at the San Diego game a few weeks ago and the Chargers dominated. This will be a much harder game for them, but I have my concerns as a Broncos fan!

I’m in the mood for some spicy stuff this weekend, but I’ll let you guys pick the thing.

How to Eat Half a Donut – Ok. So I’ve never eaten half a donut, but I get the idea. It is good to learn how to moderate and Darya is the best at explaining how to get that kind of control. (@ Summer Tomato)

Super Bowl Seven Layer Dip – I’ve had a lot of seven layer dips in my day but this one is really original. I like how you can just get a slice of it and get chips and everything in one deal. (@ Cupcake Project)

Maison Castro Sandwiches – Good lord these sandwiches look wonderful. There’s not really a recipe in this post, but you can kind of get the idea. I guess the first step would be finding really good bread. (@ David Lebovitz)

Olive Caesar Dressing – I love really sturdy dressings like this. Just another reminder why store-bought dressing is silly. You can use this on salads or sandwiches! (@ Sprouted Kitchen) 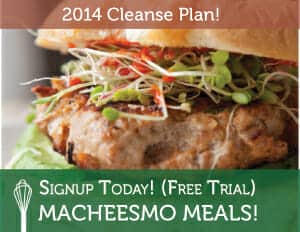 This week’s meal plan is the second part of a multi-part series on healthy 2014 eating!

You can sign up now for Macheesmo Meals and get a free week to try out this plan and the others (there are now around 20 total) and see if you like them!