Now Reading How to Break (and Fix) a Gas Stove

How to Break (and Fix) a Gas Stove 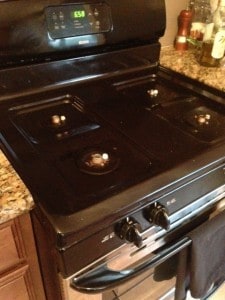 A few weeks ago I did something stupid… something that haunted my mind, home, and world for four days.

I accidentally spilled about four cups of vegetable oil on and in my gas stove.

How this happened is a story of safety, but also one of hope!  After I thought I had a dead stove on my hands, I buckled down, did some research, conquered my fear of explosions, and fixed that sucker.

I thought I would share this situation with you all mainly because I thought it ended up to be kind of funny, but also because it’s a story of something that went horribly wrong in my kitchen. Hopefully by sharing it, I can save you the trouble!

I did take a few pictures as I fixed this disaster, but honestly, I didn’t photograph every step over the three days it took me to fix the problem because I was just too focused on cursing.

Let me set the scene for you: I’m making French fries. I’ve done it a thousand times on my stovetop. I get my large frying pot out and fill up the pot with the normal amount of oil. I use my deep fry thermometer to make sure the oil is the right temperature.

But, I was in a hurry which is frequently the problem when stuff goes wrong. So I cut my fries into shoestrings and tossed them in without drying them off or starting slowly. Just a big handful of wet fries in a big pot of oil.

Luckily, I cook enough that literally as soon as I did this I realized that I had just made a huge mistake so I turned off all the burners on the stove.  If I hadn’t done that when the volcano of oil erupted out of the pot it would’ve started The Great Grease Fire of 2013. Since I turned off the burners though it just overflowed.

I’m not sure how much oil came out of the pot, but I would guess at least four cups.

As any person (but especially a man) might do, I was pretty sure I could short term fix this situation. I waited until everything cooled down and then I took off all the burners and soaked up as much oil as I could see. I washed it well and figured it was good to go.

I then proceeded to make dinner.

The thing about oil is that it’s a liquid and a slippery one at that and while I was sitting there waiting for the oil to cool, it found its way into every little crack and crease of my stove, dripping down and into the body of the stove. I found this out very quickly because when I tried to cook a meal, I created a noxious gas.

I wouldn’t call it smoke because it wasn’t dark really. It didn’t smell like smoke and actually didn’t smell like burning oil (I’m familiar with smell). It smelled chemically which I figured wasn’t a good thing.

Betsy and I, along with the friends we were feeding and Porter, had to clear out!  It was maybe the worse smell I’ve ever smelled.

The next day I woke up with a clear head and tried to figure out how to tackle the problem. I called my property management company first and they said just to run the “self clean” feature. I did this and almost killed my pets. The smoke that came out was so strong and gross and putrid. It was like ammonia plus baby diaper with a sprinkle of smelling salts.

I decided to STOP the self-cleaning. In hindsight, this was the smartest thing I did because if I would’ve kept running it I would’ve burned our house down.

I let the oven cool down and decided to open it up and see what I could see. This is what I found: 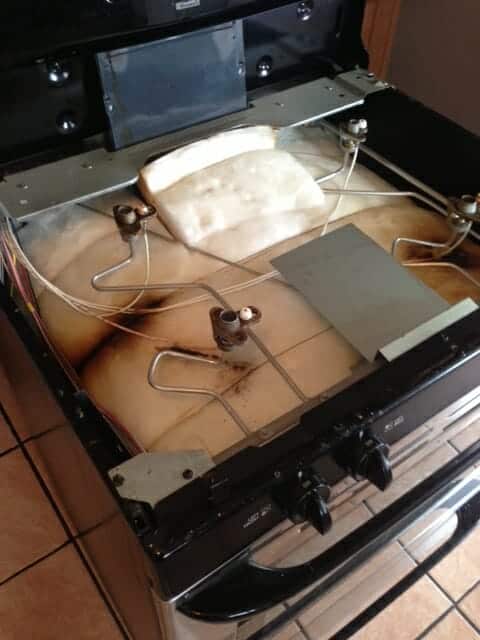 You see those huge black areas? Yep. That’s the insulation which is supposed to be fireproof that has melted releasing who knows what kind of toxic crap into the air. Hence the smell.

It became clear what happened. The oil leaked into the stove and the insulation acted like a sponge and then the heat would burn the oil which would ignite the insulation and BLAMO. Death fumes.

I decided it was time to call the experts.  I will summarize the experts I called and detail how I became infuriated:

Expert One: Appliance Company – I called the appliance company that my property management company recommended. I told them what happened and their recommendation was to “run it on low for many hours” to slowly burn off the oil. Using this thing called logic, I determined that this was the stupidest thing I’ve ever heard.

If something is clearly burning, burning it more sounds like a really bad idea.

Expert Two: Fire Department – My second call (Betsy’s idea) was to the fire department to see if I should even consider using Expert One’s recommendation of the “slow burn.”  I figured they had probably seen tons of stove/kitchen fires and would be able to look at it and say what’s what.

I called their non-emergency number and told them the deal and asked if they could come by and take a look as a preventative measure. I even offered to pay for them to come out since it wasn’t a standard situation.

There exact response: “Nope. We will only come out if it’s actually on fire.”

Screw prevention!  Light the thing up and if it catches fire then cool. They can be there in seconds!

Expert Three: The Internet – I figured I couldn’t have been the first person to do this, but actually it was super hard to find someone that had done the exact same thing. What I did find was a ton of people online who had rat infestations in their oven insulation and they would just pull it all out, buy new insulation and replace it.

So I figured I would try that.  If it didn’t work, I would just have to get a new oven.

I Sympathize with Exxon

I ordered some high temperature insulation from a company in town (not cheap, but cheaper than an oven) and got to work ripping out the old insulation. This took almost a day of my life and made me sympathize with anyone who has ever tried to clean oil off of anything.

Problem one is that the insulation (which is fiberglass) had literally melted onto the oven. It was almost like a layer of black glass over every surface. I had to scrub this completely off with steel wool. Anything that was left would probably burn again so I was super diligent. This took 4 hours.

Problem two was the oil. It was everywhere. There was a light sheen on every surface plus pools of it in places that was blackened and tarred. It took almost an entire bottle of cleaning solution to get all the oil off and have a dry surface all around. This took another 2-3 hours.

The easiest part was just stuffing the new insulation in and around the oven which took about 30 minutes.

Then I was staring at this pretty thing! 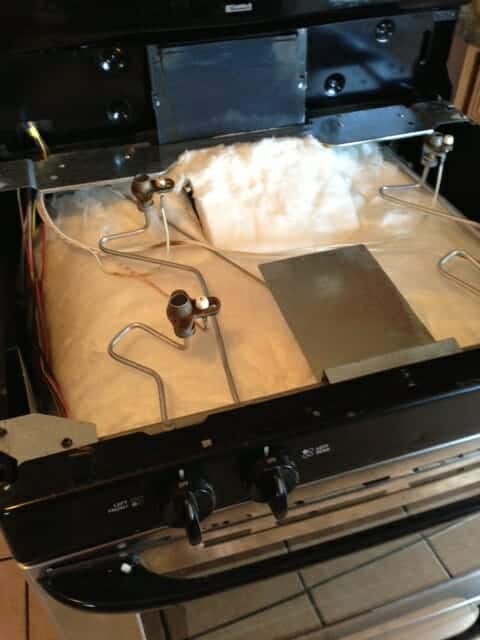 Most importantly, when I ripped out all that old burned insulation, the smell in the house improved dramatically which made Betsy want to stay married to me.

After that, I just hooked up the gas again and plugged everything back together. I had to take off roughly four dozen screws to get the oven apart to clean all the sides and everything.

Then I took a deep breath and lit it up! 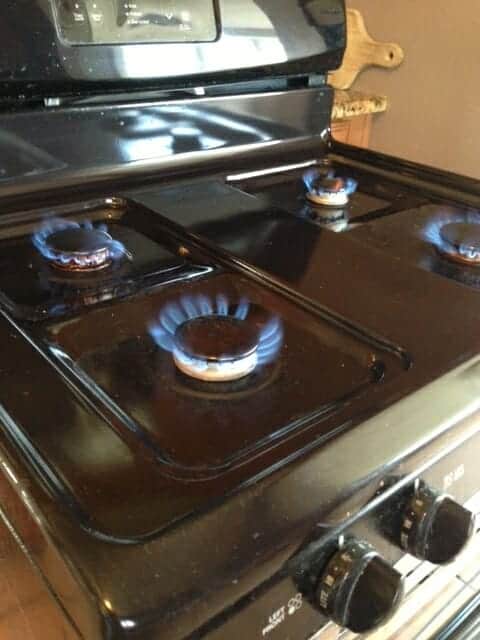 It lit a beautiful blue flame.

I waited. No smoke. No fumes.

I then did the universally recognized Happy Dance.

Here is my short list of tips if you ever find yourself in a bind with a stove.

1) Be safe. If you are going to try to take apart or mess with the oven at all, be sure to turn off the gas and electric connections. Explosions suck. It also helps to refer to the owners manual for how to take off the sides and top of the oven.

2) Ask for Help. Don’t be macho if it’s truly new territory for you, but also don’t be afraid to trust your instincts if you think you are getting bad advice. I had this moment where I was staring at the thing and said, “I have a six figure education. I know that burning this off is a horrible idea. I have to be able to figure out how to handle this thing.”

3) Be careful frying. It’s far and away the most dangerous thing you can do in your kitchen. Don’t get rushed with it, even if you’ve done it a million times. Take your time and do it safely.

Through some luck and some sheer stubbornness, I was able to fix this thing and it runs like a champ now. No more smell and no more issues.

If there is anyone out there who has broken an oven, leave a comment. I need to know I’m not the only one!