Betsy and I both came down with some sort of mild plague last week.

It was one of those annoying sicknesses that wasn’t completely debilitating, but just hung with you for days and days.

Eventually, I got fed up and decided to combat the thing the best way I know how:  Homemade soup.

One of my favorite soups when I’m sick is the Hot and Sour Soup that is very popular on Chinese takeout menus.  I’ve always wanted to tackle a homemade version, but I usually get dejected when I see the  list of ingredients.

I was ready on this day though.  After a quick trip to the closest Asian market, I had all the things I needed.  The soup itself was actually pretty easy to make and, as you might expect, way more flavorful and filling than the takeout version.

Hot and Sour Soup is a popular soup at American Chinese restaurants for good reason! My homemade version is packed with lots of spicy and savory flavors.

1) To make chicken stock, add all the ingredients to a large, heavy stockpot. Bring to a simmer, then turn heat down to low.

2) Simmer, partially covered, for about 3 hours. Strain out the solids and use the stock in the soup.

5) In a large, heavy pot, add vegetable oil, ginger, garlic, and chili garlic sauce. Cook over medium heat until they ginger and garlic are very fragrant, but be careful not to burn them, about 3-4 minutes.

6) Add soy sauce and rice vinegar and stir to combine.

8) Pour in chicken stock and bring to a simmer. Simmer over low heat for 15 minutes.

9) Make a slurry with the cornstarch and water until it’s a light mixture. Slowly stir the slurry into the soup.

10) Stir in tofu and continue to simmer. Season with a pinch of sugar and ground pepper.

As with any soup, what takes this soup from just okay to excellent is the stock.

Even if you don’t make your own stock, take the time to simmer your store-bought stock with the ingredients for the chicken stock above.  That will infuse some much needed flavor and really help out.

For me though, I just tossed a chicken carcass that I had in the freezer in a large, heavy pot with the other stock ingredients.

Simmer for about 3 hours and you’ll have a really fantastic stock.  The ginger, scallions, and chiles give this stock a really unique flavor.

Don’t skip this step if you want a flavorful soup.

Once the stock has cooled a bit, strain out the solids and use the stock for the soup later.

There’s at least one ingredient in this list that you’ll need to go to a real Asian market to find: Dried black fungus.

This is kind of weird stuff.  It’s not mushrooms really, it’s just strips of black fungus.

You could leave them out if you can’t find them and just double up on the other dried mushrooms, but they add a nice savory flavor to the soup so try to find them.

Plus, they are kind of fun to cook with.

For the dried mushrooms and fungus, soak them in boiling water for about 20 minutes.  That will reconstitute them and then you can just slice them into strips.

The fungus should really expand in the water.  I think they about triple in size once they are reconstituted.

The other ingredient that might not be familiar to you is bamboo stalks.  These have a really mild, almost sweet flavor.  They come canned and are in these funny cone shapes.

They are really easy to dice up.

Once you have all the pieces for this soup, it’s pretty straightforward to bring everything together.

Start by heating the oil in a large, heavy pot over medium heat.  Then add in the garlic, grated ginger, and chili garlic sauce.  Let this cook until it’s nice and fragrant, about 3 minutes.

Be careful not to burn the garlic and ginger though.

Next, add in the sliced bamboo and sliced mushrooms.

The mushrooms are one of the savory ingredients in this soup that gives it that really unique sour and savory flavor.

Don’t skimp on them!

Next, add two ingredients that bring a lot of flavor to the Hot and Sour Soup: Soy sauce and rice wine vinegar.

The rice vinegar is really important.  It gives the soup more of that great sour flavor.

Hot and Sour Soup: The Slurry

Once the rice vinegar and soy sauce are added, you can also add the chicken stock and bring the soup to a simmer.

Once it’s simmering, it’s time to thicken the soup a bit.  If you’ve ever had this soup from a takeout place, you know that it’s slightly thick and almost glossy.

Cornstarch will give you that consistency.

Whatever you do though, don’t just add cornstarch to the soup.  If you do, it’ll never dissolve all the way and just clump up.  Instead, mix the cornstarch with some water and then slowly stir that slurry into the soup.

Once the slurry is added, you can also stir in your cubed tofu.  The tofu doesn’t really need to cook, but it is nice to let it simmer for a few minutes so some of the flavors get infused.

The soup will be really good at this point.  It won’t need any salt most likely, but will probably benefit from a pinch of pepper and sugar.  The small pinch of sugar will balance out some of the sour flavors.

As a final step, just beat an egg until it’s scrambled and then drizzle it into the soup pot.  The egg will cook immediately and add these nice strands of egg.

Traditionally, this technique is for egg drop soup, but I like it in this soup also.

Once the egg is added, the Hot and Sour Soup is ready to serve!

I like to serve it with lots of chopped cilantro and scallions.

While some of the ingredients may be new to you, the soup itself isn’t that hard to make.

The recipe makes a ton and the soup keeps great and is easy to reheat in the microwave or on the stovetop.

As I said though, the most important part is making sure you start with a flavorful stock.  You can use store-bought, but simmer it with the stock ingredients to infuse flavor.

Give this a shot if you’re feeling adventurous.  It was one of my favorite soups I’ve ever made. 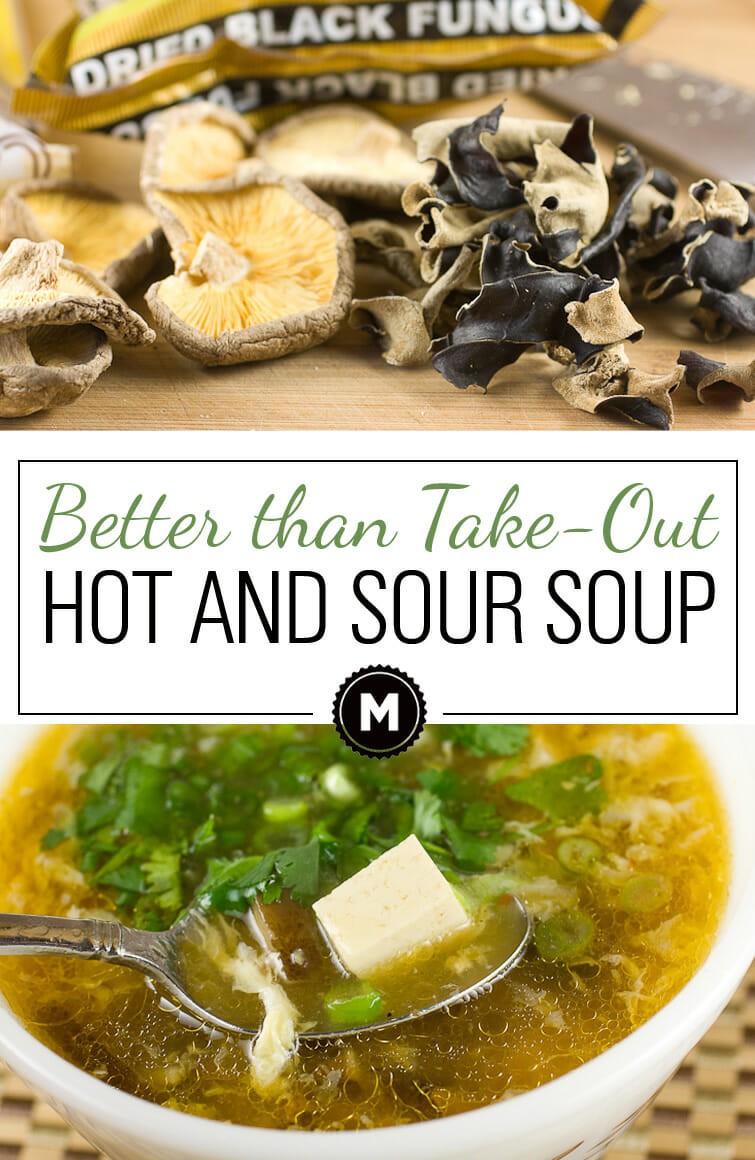 20 Responses to “Hot and Sour Soup” Leave a comment