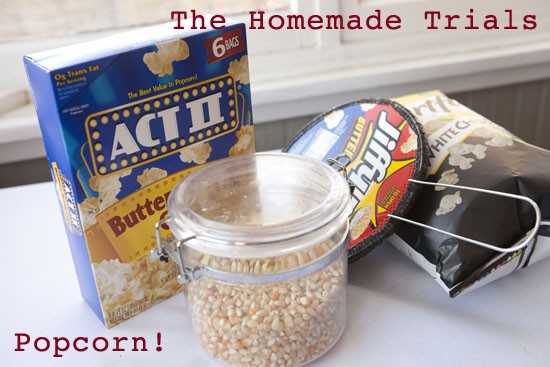 I’ve been a huge proponent of homemade popcorn for many years now. Frankly, I just think it tastes better than the microwaved version and I’m pretty sure that it’s way cheaper, but sometimes my bias can get in the way of actual reality so I wanted to run a few different kinds of popcorn through my homemade trials and see what comes out on top!

My homemade version is really easy and I’ve used it for a few different recipes here on Macheesmo.

Basically, I just cover the bottom of a large pan with popcorn kernels so they are in a single layer. This works out to be about 1/3 of a cup for my pot.

Then I add a neutral oil like vegetable oil until it just covers the kernels. This is about 1/3 of a cup also. It looks like more than that because the kernels displace a lot of oil.

I put this over medium heat with a lid and wait for the popping to start. When the popcorns starts popping, I press down on the lid to keep the pressure in the pot and shake the pot vigorously for 30-60 seconds as the popping continues.

As soon as the popping slows to a few seconds apart, I take it off the heat and it’s done!

Once it’s done, you can season it in many ways. I personally like it with seasoned salt.

Ok. Obviously when it comes to time, Smartfoods has to win unless it takes you five minutes to open a bag!

Other than that though, I’m saying that all the methods are basically a tie. Microwaved popcorn was done a bit before my homemade version by maybe a minute. Jiffy pop actually took the longest, but we are talking a difference of a minute or two in each case.

The time it takes to pop popcorn is pretty much the same no matter what. It’s a tie!

One thing I was pretty certain of going into this is that popcorn is pretty cheap. It’s less cheap though if you have someone else pop it for you!

FOUR cents per serving is damn near free. Microwaved popcorn is also pretty cheap, but homemade popcorn is almost nothing.

This category is a bit skewed because it’s impossible to find all the same variety of popcorn. The microwaved version I used was accidentally kettle corn. Anyway, here’s the line up!

As expected, these are all pretty similar. Except for Jiffy Pop which for some reason has an alarming amount of Trans Fat in it. I checked and doubled checked that label and for some reason it’s jam-packed with trans fat which is notorious for causing all sorts of bad things.

Other than that though, I’m going to say that all of these are basically a tie. You can nickel and dime a few things here and there, but at the end of the day popcorn is a pretty healthy snack. Not healthy like carrot sticks, of course, but within reason.

NUTRITION is a TIE! (except for Jiffy Pop)

As always, I was pretty nervous about taste. After all, all of these foods have teams of people engineering their taste and most of them should probably taste pretty good. Could my homemade version (in the orange bowl) stack up?

I tasted them and Betsy tasted them completely blind so her results are probably more accurate. We basically agreed though.

We both didn’t like Smartfood or Jiffy pop. Smartfood, which is a snack I thought I loved, tasted weirdly like chemicals when it was tasted next to normal popcorn. Jiffy pop on the other hand was just horrible. The only time we ever eat Jiffy pop is when we are camping and anything tastes good when you are camping!

My version and the microwaved version were both great. I would happily snack on either of them and Betsy thought the same.

When it comes to popcorn, here are my thoughts:

1) Smartfood is a rip off. It’s very expensive and didn’t taste that great stacked up against other popcorn. If you’re using popcorn as a snack, just make a big batch of it and take it in plastic bags.

2) Jiffy pop is horrible. It tastes bad and it’s bad for you.

I’ll stick to my homemade popcorn I think which I can buy in bulk and season however I like.

What are your thoughts?! Do you like popcorn and how do you make it?