I’ve been putting off doing this homemade trial for a while now, but I was making some fresh pasta over the weekend and figured I might as well put it through the trials. I’ve been delaying on it mostly because I’m pretty sure I know the results (I lose), but at the same time, I’ve been surprised by Homemade Trials before so I figured it was worth a shot.

If you’re unfamiliar with the Homemade Trials, I make a homemade version of a food and put it up against a few (three in this case) different store-bought versions in the categories of TIME, COST, NUTRITION, and TASTE and see who comes out on top!

Let’s dig in and see how I did! 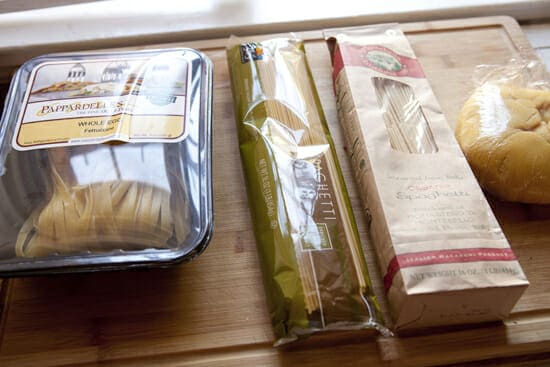 It should be noted that I bought all of the pastas that I put in this trial from Whole Foods because that was where I happened to be shopping on this day. I figured this would mostly impact cost, but I still found a pound of spaghetti for about a buck which is the same as cheaper varieties.

Besides my homemade version, I bought the cheapest spaghetti I could find (store brand), an more upscale spaghetti from Italy, and a fresh pappardelle pasta. The fresh pasta is very close to homemade and it was what I was most worried about when it comes to taste.

This is about as simple as homemade pasta gets!

1) Mix together salt and flour on a clean counter and make a well in the center of the flour mound.

2) Crack eggs and yolks into the center of the well.

3) Using a fork, slowly incorporate the eggs into the flour. Ideally, you’ll do this slowly until you have a nice firm dough, but if the eggs escape the well, you can just stir everything together as well as possible.

4) Once the dough is together, start kneading it. It will be a pretty stiff dough. If it is cracking and not holding together, add some water to the dough, but it should be pretty stiff.

5) Knead the dough for 10-15 minutes until it’s very smooth, but should be still on the firm side.

6) Cover the dough loosely and let it rest for at least 30 minutes.

7) Divide dough into quarters and work with one quarter at a time. Run it through your pasta roller until it reached the desired thickness or you can carefully roll it out on a lightly floured surface until it’s the desired thinness. It’s very hard to get it as thin as a pasta press will.

8) Once it’s rolled, cut the dough into your desired strips or shapes and toss them lightly with flour to keep the strands separated. Cook in salted boiling water until they float. It will take only a few minutes to cook.

Homemade pasta is kind of a lost art and it does take around two hours to do, but to be honest, it’s not as hard as you might imagine.

Basically, you just stir together the flour and salt and then make a well and crack your eggs into the center of the well.

Slowly incorporate the eggs into the flour with a fork until it forms a really sturdy dough. At some point you’ll have to use your hands to shape it into a ball and then you can start kneading it. It’ll be pretty tough to knead but do your best for a few minutes.

Then let the dough rest for 5-10 minutes so it can relax and then continue kneading for about 10 minutes until the dough is soft and smooth.

Wrap the dough in plastic and let it rest at room temperature for at least 30 minutes.

Then cut the dough into quarters and flour each quarter. Use a pasta roller to roll out your pasta to the desired thickness and cut it up!

That’s pretty much all there is to it! I made homemade pasta a few dozen times in my life now and it seriously gets easier every time I do it.

Anyway, let’s get down to the trials!

Obviously, my homemade version loses the time category. It takes a few hours to make and store-bought pasta takes minutes to boil. If you are getting really picky here, the fresh pappardelle actually wins because it takes just a few minutes to boil since it’s fresh. The dried pastas will take 10-12 minutes to boil.

In any event, time goes to store-bought!

I was pretty sure I would lose this as well since I used quality eggs and good semolina flour. I wasn’t the worst though. The fresh pasta in the store is ridiculously expensive.

Dried spaghetti is about as cheap as it gets though so that’s the clear winner here.

I wasn’t sure how nutrition would play out and I honestly thought it would be a tie. I wasn’t exactly right on that though. Nutritionally, there’s an argument for homemade pasta being the worst on the list since I used a lot of eggs which boosts the fat and cholesterol in the pasta. The other versions use water to make the pastas. Even the fresh store pasta uses a mix of egg and water.

For my version though, I like all eggs which makes for a really delicious and rich pasta. Honestly, I don’t think anything in the homemade pasta list is particularly bad for you, but if you are comparing, it’s probably the worst because of the fat, cholesterol, and sodium.

Well, as expected, it doesn’t really matter how it tastes if you are just going by the categories. My homemade version is already 0-3.

But guess what… my homemade version killed it in the taste test. Here’s what I learned:

1) Don’t buy expensive spaghetti. There was literally no difference in taste that I could tell between the store brand and the 3x more expensive version.

2) I don’t love the fresh store pasta. I found it to be a bit on the thick side (in the purple bowl above). It wasn’t as flavorful or as tender as the homemade version and is really expensive.

I think this homemade trial played out about how I actually use pastas. Betsy and I eat pasta once a week probably and I almost always just get some sort of cheap dried pasta. I don’t find it worthwhile to make pasta a lot even though I know it’s really good.

To me, the time category is the most important. I use pasta as a fast meal and so that is more important than the nutrition, cost, or even taste.

But, if I do have the time or if I’m cooking for a special occasion, I love being able to make homemade pasta. It’s kind of a show-stopper and will elevate any pasta dish you make.

Does anyone disagree with this? Does anybody make large batches of fresh pasta and freeze it? Does anyone even make homemade pasta?!

27 Responses to “The Homemade Trials: Pasta!” Leave a comment