Why did this have to happen? My life was so very simple a week ago. I was a mayo hater. I didn’t like it on sandwiches. I thought the texture and flavor were both pretty gross. I didn’t know how it was made or what the deal was with it.

So I didn’t like it. It was that simple.

But somebody, and I can’t remember who, told me that I couldn’t call it quits on mayo until I tried it homemade.

I said, “Ok. Sure. Whatever dude.” That was a long time ago and I just continued disliking Mayo.

But seriously. That wise person, whoever that was, was correct. Homemade mayo is a delicious creation. Whoever first made it should win an award of some sort.

It takes only a few minutes to make and I hereby swear that if I have my way than mayo companies across the world will start going out of business very soon.

A photo walk through of making mayonnaise from scratch. Be careful though. Once you try this you won’t able to eat any other mayonnaise ever.

The method I used is from Ratio.

1) Whisk yolk, water, and salt together in a large bowl.

2) Drizzle in a few drops of oil while whisking.  Do this a few times until the yolk mixture starts to lighten in color.

3) Continue adding oil, drizzling in a bit more each time while whisking.

4) As the sauce firms up, you can drizzle in more oil each time.

5) When the oil is all mixed in, the mayo should be very thick.  Serve with whatever you can put it on!

What I do love about this recipe is how utterly simple it is… in theory. While there are pretty unlimited possibilities, it really only requires 4 ingredients: eggs, oil, salt, water. If you don’t regularly have these things in your kitchen, then I can’t help you.

I love this recipe so much because it sort of embodies what I love about cooking.

If I told you that I’m going to take an entire cup of oil, add only two other things to it, plus a bit of water, and you will want to eat it with a spoon, you’d call me loony.

Because a cup of oil is kind of a lot of oil and oil, generally, is not something people want to eat with a spoon.

The method to make this stuff is really pretty simple. Start-to-finish I can do it in about 2-3 minutes. It does involve some serious whisking though, so get ready for that.

It’s important to think about what you’re trying to do here when you make mayonnaise. Technically, it’s called an emulsion and it just means mixing two ingredients (in this case oil and water) that under normal circumstances hate each other.

But with a tiny amount of egg yolk and some serious whisking, you can get these two things to combine beautifully and stay stable. The key though is to start slowly. If you pour a cup of oil into a bowl with some egg yolk and water, it’s never going to work.

So starting slow is the key.

Start by whisking your yolk with your tiny amount of water and salt in a large bowl. Pretty basic so far.

Then keep whisking while you add a few drops of oil.

Now, when I say a few drops I literally mean 2-3 drops of oil. If you add even a teaspoon, it’s probably not going to work.

Once you’ve done the drop-by-drop addition of oil a few times and your mixture is looking lighter, then you can start adding a bit more oil. At this point I start drizzling in a teaspoon at a time, whisking while I add the oil.

After I do this a few times, the mixture will start to firm up a bit.

As the emulsion starts, you can add your oil more liberally. At this point, you can start adding it a tablespoon or so at a time, drizzling it in as you whisk and whisking furiously.

When you get down to about 1/2 to 1/3 cup of oil left, you’re mayonnaise should be getting really thick.

At this point you can just drizzle in the remaining amount of oil as you whisk because the emulsion should be pretty stable. Don’t stop whisking though and drizzle in a constant slow stream.

After all your oil is gone, your mayo should be very sturdy and stiff.

This was my finished version! 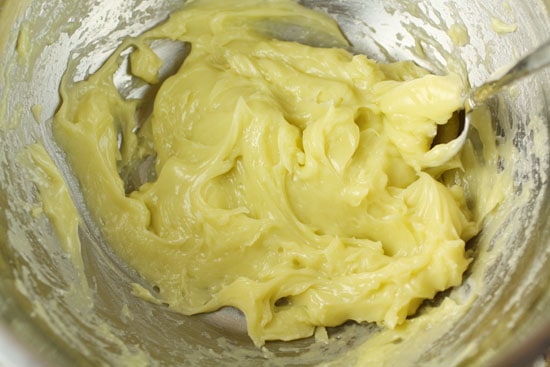 When it All Goes Wrong

Sometimes emulsions don’t work. I made this mayonnaise recipe twice in the last two weeks and one time it worked beautifully and one time it didn’t. I swear I did the exact same thing. You’ll now when it breaks because the mixture won’t firm up at all. If you can pour your mayo, you failed.

As Michael Ruhlman says in Ratio though:

“Mayonnaises can be the Difficult Child, beloved in spite of their misbehavior, breaking into gloop just as you are about to finish. Sauces can sense when you’re afraid of them, so don’t be. Mayonnaises can and will break on you and sometimes you simply have to let them!”

The good news is that a broken, watery or gloopy mayo isn’t unfixable.

When it goes wrong, this is how to fix it.

Pour your broken mayo into a separate bowl and wipe out your mixing bowl really well. Add another Teaspoon of water to the mixing bowl along with a bit more egg yolk if you have some. Then start the process over again! Drizzle in a few drops of the broken sauce mixture and whisk whisk whisk.

Go through the whole whisking process again with a clean bowl. It should emulsify on round two. Mine did without a problem. If you still can’t get it after the second time, you are probably adding your oil too quickly.

While it’s really impossible to explain how much better this stuff tastes compared to store bought mayo, a side-by-side look can give you a hint at the difference.

I’ve eaten this literally on everything I can think to put it on for the last two weeks. It’s rich, salty, creamy, and just wonderful.

What do you think? Homemade mayo? Worth the whisking?